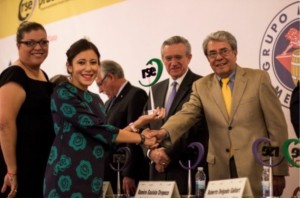 Cemefi presents this award to companies who pursue environmentally friendly practices that are original and sustainable, implemented for at least one year, and demonstrate the organization’s commitment to a policy. They recognized BRP’s Juárez manufacturing facility for its care and preservation of the environment, and for its regular CSR activities during the awards ceremony that took place in Guadalajara, Mexico on October 9, 2015.

The Executive Chairman of Cemefi, Jorge Villalobos Grzybowicz, said that “the award-winning CSR practices show that businesses can achieve excellence not only in serving their employees and consumers, but also in serving society and the environment.”

BRP’s commitment to success extends beyond the walls of its facilities. Its CSR program establishes a structure to ensure that BRP is doing the right thing in many areas, including the environment and involvement in communities.

BRP’s Juárez manufacturing facility strives to reduce its environmental impact and has been successful with many initiatives. The Green Race and Ecological Fair—in 2014 and 2015 respectively—promoted environmental culture within the company and throughout the City of Juárez. The Fairs collected six tons of electronic waste and resulted in 2,000 newly planted trees. In addition, the Juárez site initiated permanent activities, including a program to eliminate disposal waste in a more eco-friendly manner.

“Our team in Juárez has been determined to make a positive impact on the environment and community,” said Sylvain Blanchette, BRP’s vice-president of Operations, Mexico and Canada. “We’ve planted trees, sponsored local ecological projects, exchanged plastic bottles for an eco-friendly alternative, and much more – and we will continue to do so in the future.”

The Mexican Center for Philanthropy (Cemefi) is a private non-profit apolitical lay organization whose mission is to promote and coordinate philanthropy and social responsibility of committed citizens, organizations and businesses to achieve a more equitable, united and prosperous society.

About BRP BRP (TSX:DOO) is a global leader in the design, development, manufacturing, distribution and marketing of powersports vehicles and propulsion systems. Its portfolio includes Ski-Doo and Lynx snowmobiles, Sea-Doo watercraft, Can-Am all-terrain and side-by-side vehicles, Can-Am Spyder roadsters, Evinrude and Rotax marine propulsion systems as well as Rotax engines for karts, motorcycles and recreational aircraft. BRP supports its line of products with a dedicated parts, accessories and clothing business. With annual sales of over CA$3.5 billion from 107 countries, the Company employs approximately 7,600 people worldwide.
www.brp.com

@BRPNews
Ski-Doo, Lynx, Sea-Doo, Evinrude, Rotax, Can-Am, Spyder and the BRP logo are trademarks of Bombardier Recreational Products Inc. or its affiliates. All other trademarks are the property of their respective owners.