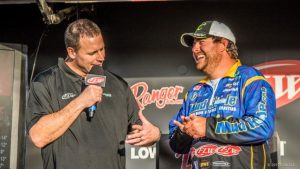 LEESBURG, Fla. (March 11, 2017) – Mud Hole Custom Tackle pro John Cox of DeBary, Florida, retained control of the leaderboard Saturday at the FLW Tour at the Harris Chain of Lakes presented by Ranger Boats for the third straight day with five largemouth bass weighing 10 pounds, 4 ounces. If he retains his lead Sunday, Cox will earn his fourth career FLW Tour win and best 163 of the top bass-fishing anglers in the world competing for a top cash award of up to $125,000.

“Today was not very good for me,” said Cox, who retained his lead despite weighing in the second-smallest limit amongst the top-10 Saturday. “I ran all over the place trying new places. I locked to (Lake) Apopka today for the first time this week. I was mainly sight-fishing, but I think I’m going to have to scrap that tomorrow and just go fishing.”

Cox said that with no real pattern to go on, he has been forced to change his baits each day. He said a Yamamoto Senko has his been his most productive bait this week, but he’s also caught fish on a Dirty Jigs swimjig, a fluke and pitching a jig. He welcomed the changing weather conditions that are currently being forecast for Sunday.

“Nothing went wrong for me today, it was just tough,” said Cox. “Hopefully the little bit of wind and rain that is being forecast tomorrow will make things exciting. So much can change here, even overnight. I’m pretty much just going to try to feel it out as the day goes.

“All that I know is I’m so happy to be where I’m at. I’ve dreamt of this moment – to be leading an FLW Tour event on my home lake. I cannot wait to get back out there tomorrow.”

“I’ve ran out of bed fish. I had one 2½-pounder left, and I caught him today. Now I’m going to have to go chunk and wind. I probably caught around 40 fish today, and I lost a 4-pounder, so I’m around some fish. Hopefully tomorrow I can make something happen,” added LeHew

The top 10 pros advancing to the final day of competition on the Harris Chain of Lakes are:

Overall there were 96 bass weighing 236 pounds, 9 ounces caught by pros Saturday. Seventeen of the final 20 pros weighed in five-bass limits.

Robert Crosnoe of Inverness, Florida, won the co-angler division and $25,000 Friday with a two-day total of 10 bass weighing 33 pounds, 1 ounce, followed by Tyler Woolcott of Port Orange, Florida, who finished in second place with 10 bass weighing 30 pounds, 9 ounces, worth $7,550.

In FLW Tour competition, pros and co-anglers are randomly paired each day, with pros supplying the boat, controlling boat movement and competing against other pros. Co-anglers fish from the back deck against other co-anglers. The full field of 326 anglers competes Thursday and Friday Co-angler competition concludes following Friday’s weigh-in, while the top 20 pros based on their two-day accumulated weight advance to Saturday. Only the top 10 pros continue competition Sunday, with the winner determined by the heaviest accumulated weight from the four days of competition.

Prior to the weigh-in Sunday, FLW will host a free Family Fishing Expo at the Venetian Gardens from noon to 4 p.m. The Expo is a chance for fishing fans to meet their favorite anglers, enjoy interactive games, activities and giveaways provided by FLW sponsors, and learn more about the sport of fishing and other outdoor activities.

Television coverage of the FLW Tour at the Harris Chain of Lakes presented by Ranger Boats will premiere in high-definition (HD) on NBC Sports Network (NBCSN) May 3 from 12:30 p.m.-1:30 p.m. EDT. The Emmy-nominated “FLW” television show airs on NBCSN, the Pursuit Channel and the World Fishing Network and is broadcast to more than 564 million households worldwide, making it the most widely distributed weekly outdoors-sports television show in the world.

The total purse for the FLW Tour at the Harris Chain of Lakes presented by Ranger Boats is more than $800,000, including $10,000 through 50th place in the Pro division. The tournament is hosted by Lake County, Florida.