Mental Fishing – Intro to the Mind with Charles Plott 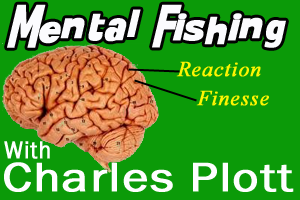 Every athlete needs to maintain a mental edge in order to perform at their highest potential. Sadly, many of them pay so much attention to their physical conditioning and skills and neglect the one aspect that may provide their greatest advantage – their mind.

After my undergraduate studies at the University of Alabama, then my Master’s program at Georgia State, I went into practice as a counselor in 1988. I soon found that I had a knack for working with athletes, and in 1996 started working as a Performance Consultant for athletes at all levels.

In 2006 I worked with student athletes in 18 different athletic conferences, and in 2008, I served as a personal consultant to Paul Azinger, the Captain of the U.S. Ryder Cup Golf team. That team beat Europe, and brought the Ryder Cup trophy back to the U.S. after three consecutive losses.

The difference in that team was that they began to understand their own strengths and weaknesses, and each of them began to develop what I like to call a “Performance Identity.” That being a complete understanding in how they reacted to different circumstances mentally, how they liked to do things, and what their own individual style was. Al of those things helped the Captain organize the team for their tournament.

The difference in that team was Captain Azinger’s ability to recognize each player’s unique Identity, both on and off the course. That allowed him to create an atmosphere that fed their competitive egos, reduced their fear of failure, and resulted in pairings that made teamwork productive and fun. The result for Captain Azinger was an inspiring victory.

Over the past couple of years I began to work with bass anglers. In researching the sport, I poured through episodes of the Bassmasters on ESPN2, and I quickly came to the conclusion that being a successful tournament professional may be one of the toughest mental tasks in athletics.

Bass anglers not only require physical stamina, but, unlike most other athletes who get to take mental breaks between plays, innings or quarters; bass anglers must stay mentally in tune 100-percent of the time – for more than eight hours a day.

My goal is to help people begin to recognize the “Mental Traps” they place on themselves that place limits on their ability to perform. I also look to help them find the “Performance Identity” that is based on their personality and experiences.

Fishing, like golf, requires a person to perform constant mental maintenance. That is one of the reasons why time on the water is so important. But, it is even more valuable to an angler who truly understands his mental makeup and his own personal characteristics, because that time is spent in a much more productive and efficient manner.

My goal is to help people achieve the level of Unconsciously Competent as quickly as possible – and it starts with knowing who you are as an athlete. Hopefully my contributions to Advanced Angler.com will help you get there.

Charles Plott, M.S. is a Performance Consultant. He brings two decades of experience helping individuals, teams, and businesses improve performance. Charles is a retired Licensed Professional Counselor, with over 20,000 hours of experience. His website is www.pasprofile.com