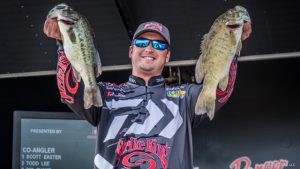 ROGERS, Ark. (April 27, 2017) Pro Cody Meyer of Auburn, California, caught a five-bass limit weighing 16 pounds, 1 ounce Thursday to take the lead on opening day of the four-day FLW Tour event at Beaver Lake. The event, presented by General Tire, features a field of 322 of the world’s best bass-fishing professionals and co-anglers casting for top awards of up to $125,000 cash in the pro division and up to $25,000 cash in the co-angler division.

A rainy week has brought Beaver Lake water levels up drastically – as much as 8 feet – in the last seven days. As anglers launched from Prairie Creek Park Marina they faced a very different fishery than the one that they had experienced during practice. While many competitors fished shallow water, Meyer ran into a few smallmouth in deeper water with a drop-shot rig.

“Today was awesome, but I got really lucky,” said Meyer, an eight-time Forrest Wood Cup qualifier. “I pulled up on a deep spot where I had gotten a bite in practice and caught four good smallmouth. It happened really quickly. I had a limit around 13 pounds or so, and I ended up making my way back to the check-in at Prairie Creek to end my day. I ended up catching two largemouth shallow just before checking in – my two biggest of the day. It was so random, but those big ones really helped.”

“I caught them on four different baits,” he said. “I flipped a couple, threw some little swimbaits and had a couple of different drop-shot rigs.

“I’m looking forward to going back out there tomorrow, but who know what’s going to happen,” Meyer went on to say. “I’ve been here so many times that I know it is very possible to go out tomorrow and not even get a bite. I’m very happy to be where I’m at, though.”

John Devere of Berea, Kentucky, earned the day’s $500 Big Bass award in the pro division thanks to a 6-pound, 4-ounce largemouth.

The top 10 co-anglers after day one on Beaver Lake are:

Kevin Medine of Port Allen, Louisiana, earned $250 for the Big Bass award in the co-angler division with a largemouth weighing 6-pounds even.

In FLW Tour competition, pros and co-anglers are randomly paired each day, with pros supplying the boat, controlling boat movement and competing against other pros. Co-anglers fish from the back deck against other co-anglers. The full field of 322 anglers competes Thursday and Friday. Co-angler competition concludes following Friday’s weigh-in, while the top 20 pros based on their two-day accumulated weight advance to Saturday Only the top 10 pros continue competition Sunday, with the winner determined by the heaviest accumulated weight from the four days of competition.

Prior to the weigh-ins Saturday and Sunday, FLW will host a free Fishing Expo at Walmart from noon to 4 p.m. each day. The Expo is a chance for fishing fans to meet their favorite anglers, enjoy interactive games, activities and giveaways provided by FLW sponsors, and learn more about the sport of fishing and other outdoor activities.

Also for youth, the FLW Foundation’s Unified Fishing Derby will be held at Lake Bentonville Park, located at 2204 SW I St., in Bentonville on Saturday, April 29, from 8:30-10:30 a.m. The event is hosted by FLW Foundation pro Cody Kelley along with other FLW Tour anglers, and is free and open to area youth 15 years of age and younger and Special Olympics athletes. Rods and reels are available for use, but youth are encouraged to bring their own if they own one.

FLW is the world’s largest tournament-fishing organization, providing anglers of all skill levels the opportunity to compete for millions in prize money in 2017 across five tournament circuits. Headquartered in Benton, Kentucky, with offices in Minneapolis, FLW conducts more than 274 bass-fishing tournaments annually across the United States and sanctions tournaments in Canada, China, Mexico, South Africa and South Korea. FLW tournament fishing can be seen on the Emmy-nominated “FLW” television show, broadcast to more than 564 million households worldwide, while FLW Bass Fishing magazine delivers cutting-edge tips from top pros. For more information