I went on a forced diet this week. The first couple of days of the week were spent battling Montezuma’s Revenge, and I lost about four pounds in two days. Not a diet that I’d recommend.

After recovering, I spent a full day trying to get an hour and a half of footage for one of my sponsors on the water. But, the reason it took a full day was partly my fault. The cameraman, named Cody from Careco Multimedia flew in with his camera for the shoot.

We went to the California Delta figuring it would give us the best backgrounds and might even give us a decent shot of catching some quality fish on film too. But, as can happen, the day didn’t go as planned. After waiting three hours for the fog to lift so we could start filming, our outing on the Delta lasted only a few moments.

One of the shots they wanted was a shot of me running my Stratos Elite 210 past the camera in a high speed fly by like you might have seen in the movie Top Gun. So, I dropped Cody off on a wooden structure that we call a pump house in the East Delta, and proceeded to get the boat in position to make the high speed pass.

When he was in position, Cody signaled me to start, and I put the boat on pad and got it up to speed. I steered the boat close to the structure, buzzing the tower as they said in the movie; I found out a moment later that I’d gotten a little too close to the tower. 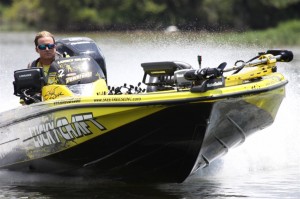 I got the camera wet. I don’t mean I gave it a little spritzing; I totally drenched it with the wash coming off the back corner of the boat. As I turned around to see if he got the shot, I saw him wiping off the camera. As I got closer, I saw water pouring out of it – not good.

We got a hold of a local rental house, and were able to rent the same camera for the rest of the day, but in getting the camera, we had to go closer towards home, so we changed lakes and did it at Folsom Lake. I think we got all of the footage we needed, but I’d especially like to see the footage of the camera taking a bath.

Other than that, I got some news this week from my friend Don Barone, a writer who has followed us on tour the past couple of years. Don is my favorite writer, his articles always touch me, and they usually get me kind of choked up; okay, a bunch of them have brought me to tears.

A couple of years ago, Don ran a story about an orphan kid named Javier who he had learned loved to fish. I wouldn’t do that story any justice if I tried to tell it myself, so if you want to read it, I’ll let Don tell you himself in his story Christmas for Javier from Bassmaster.com.

Anyway, I got an email from Don this week letting me know that Javier had been adopted by a family, and that his Christmas dreams were coming true; let me pause to wipe the tears off the computer – thanks Don.

In the spirit of news like that, Kim, the Girls and myself want to wish all of you a very Merry Christmas, and a safe holiday season.

Thank you for making our lives a part of yours – Merry Christmas.

For more on Skeet Reese, his sponsors and career accomplishments, visit his website at www.skeetreeseinc.com