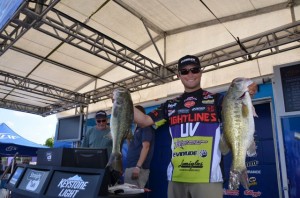 EUFAULA, Ala. (May 16, 2013) – In the practice days leading up to the Walmart FLW Tour at Lake Eufaula presented by Straight Talk Wireless, many pros debated whether the winning pattern would be found by fishing shallow waters or fishing the ledges out deep. After a tough day one, pro Justin Lucas of Guntersville, Ala., proved everyone correct by combining the two patterns and producing a solid five-bass limit weighing 22 pounds, 6 ounces. He now holds a slim 3-ounce lead heading into day two of the four-day competition featuring the world’s best bass-fishing anglers vying for the top cash award of up to $125,000.

“I don’t think anyone was expecting the morning to fish the way it did,” said Lucas, who has amassed more than $460,000 in earnings with FLW. “The clouds rolled in and stayed for a long time. It really prolonged the morning bite.

Lucas used the cloud cover to his advantage and boated an estimated 16 to 17 pounds in the first 90 minutes of competition. He chose not to divulge his shallow-water tactics, but did say that fishing slowly was important. He was able to catch one fish that he had located in practice off of a bed, and also caught a 5-pounder throwing a frog on a random piece of grass

“I caught 17 or 18 pounds shallow, and then I went out deep to what I feel is like a magic spot,” Lucas said. “It’s an offshore area that I found in practice. It’s a hard spot, out in the middle of nowhere, about 5 to 8 feet deep. They’ve got nothing else to go to out there, so it’s a magnet for them.”

Lucas said he targeted the ledge with a Lucky Craft LC 2.5 DD crankbait, and he was able to cull three or four times in the afternoon.

I tried throwing a Carolina rig, but I never had a bite on it,” Lucas said.

Lucas said that he caught 10 to 12 keeper bass throughout the day, but he located several bed fish that may help him tomorrow.

“I didn’t want to catch them today because they wouldn’t have helped my weight,” Lucas said. “I just marked them and moved on. I’ll save them for tomorrow. I actually found a couple of more offshore spots in the last hour of the day today as well. We caught a few keepers off of them, so tomorrow that may be something I target. I only had one offshore area this morning, but now I have three or four. I just went fishing today. Tomorrow, I’m going to do the same thing.

The top 10 pros after day one on Lake Eufaula are:

Scott Martin won the 3M ScotchBlue Big Bass Award on the pro side with a fish weighing 7 pounds, 9 ounces worth $500.

Overall there were 593 bass weighing 1,515 pounds even caught by 155 pros Thursday. The catch included 82 five-bass limits.

Pro Kevin Stewart of Elk Grove, Calif., and co-angler Grant Holderman, of Augusta, Kan. had their day one weights zeroed after they inadvertently fished in an area designated as off-limits for competition.

Fans will also be treated to the FLW Outdoors Expo at Walmart on Saturday and Sunday from noon to 4 p.m. prior to the final weigh-ins. The Expo includes Ranger boat simulators, the opportunity to interact with professional anglers, enjoy interactive games, activities and giveaways provided by sponsors, and fans can learn more about the sport of fishing and other outdoor activities. All activities are free and open to the public.