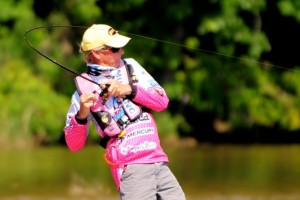 Forsyth, MO – Vicious Vision has added B.A.S.S. Elite Series veteran Kevin Short to its team of anglers wearing the new Premium Polarized Sunglasses which will officially be launched at ICAST next week. Kevin Short, of Mayflower, AK, has five B.A.S.S. wins in his career including two Elite Series wins – on Pickwick Lake in AL and the Mississippi River in Iowa.  Known to many around the tour as K-Pink, Kevin is a stickler for product quality and simply won’t fish with anything that doesn’t meet his standards.  Short’s ‘fish-to-win” attitude has definitely paid dividends over the years with his B.A.S.S. career tournament earnings totaling over $780,000.

Short approached owner, Dr. Doug Jordan, at the Bassmaster Classic in Tulsa and challenged him to deliver a pair of progressive prescription lenses that could not only deliver the benefits of a premium polarized sunglass, but could also meet his difficult prescription needs.

“I’ve been wearing Vicious Vision Sunglasses with the Xperio UVTM prescription lenses for several months now and I have to say they are the sharpest, clearest, brightest lenses that I think I have ever worn,” stated Short. “Everything I put on my face is prescription and it’s really hard to find a pair of good polarized sunglasses where you can actually see. With the Vicious Vision Pro Series Prescription lenses, I bet you can see what’s in the water.”

“When Kevin approached me with the challenges he had been facing with his prescription sunglasses, I was confident that the Vicious Vision sunglasses with the Xperio UV lens was the answer,” commented Jordan.  “And when we delivered it to him, he was thrilled.  We want our team to truly believe in what we are bringing to anglers and in Kevin’s case, seeing is believing!”

Offering a full line of performance eyewear under the trademark of Vicious Vision, the company is owned and operated by Doug Jordan.  Jordan is a 20+ year veteran of the eyecare and optical field.  He co-owns a large optometric practice with multiple locations in the southwest Missouri area.  Doug and his team are dedicated to delivering the highest quality optics and eye protection at the best price.  For more information regarding Vicious Vision, its family of products or where to purchase, visit Vicious-Vision.com.