QUITMAN, Texas — Lee Livesay couldn’t find what he was looking for, but the pro from Longview, Texas, found what he needed to lead Day 2 of the Simms Bassmaster Elite at Lake Fork with a total weight of 60 pounds, 10 ounces.

Livesay, who won last year’s Lake Fork event, started the day trailing opening-round leader Cliff Prince of Palatka, Fla., by 5 ounces. But after adding 28-10 to his first-round weight of 32 pounds, Livesay heads into 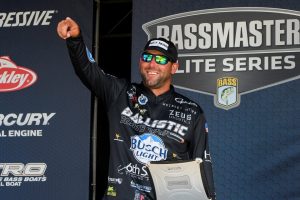 An active morning saw Livesay catch all of his weight by 10 a.m. Anchoring his bag with a 7-10, he spent the rest of the day searching for one of the mega-schools that he knows hold the caliber of bass that could’ve pushed his total past his Day 1 effort.

“I had a 4-11 and I jumped one good one off that would have helped me a little bit,” Livesay said. “I thought for sure I was going to run into a school that was right to catch a 7-plus-pounder this afternoon, but it just didn’t happen.

“Obviously, I’m happy with leading the tournament. I can’t complain; I’m just a little frustrated not finding a new group yet.”

Livesay said he’s hopeful that a smaller Day 3 field — only the Top 47 competitors — will afford him greater opportunities. With Lake Fork’s water level down about 5 feet for dam repairs, plus big winds rendering a lot of areas unfishable, Livesay struggled to find anything that would cull.

“It’s going to take a lot of luck, and I think I’m going to need a fresh group or two of fish to keep it going.”

Coming off his first St. Croix Bassmaster Open presented by Mossy Oak Fishing win at Ross Barnett on April 30, Livesay started his day fishing a point in 8 to 14 feet. He caught one of his keepers there and then moved deeper to the 12- to 15-foot range.

“One of my deeper fish came on a spot where a timber edge and a fenceline come together; there’s a high, hard spot there with a channel swing,” he said. “The other ones were on a little point with timber.”

“When I’m throwing in that timber, I’m trying to get the best angle to get the fish out of the timber,” he said. “I usually like to stay farther away from them when I’m casting to them, but you have to be able to get them out.”

After his offshore searching came up empty, Livesay moved shallow and threw a topwater. He caught a few bass that way, but none upgraded his weight.

“It was awesome — I’ve been trying to do that for years,” Palaniuk said. “I got close this year at Santee Cooper, I’ve been close other times before, so when I caught that last 6-pounder today, I was excited.

“I was stuck at 28 pounds forever with a 4-pounder, and I had lost a 6-pounder earlier in the day and it was just eating at me and eating at me. I finally caught that 6-2 around 1:00.”

Palaniuk attributed his success to investing the time to locate the right groups of fish. Bass school by size, so he referenced his practice search, during which his Humminbird MEGA Imaging allowed him to identify groups of higher-quality fish.

Fishing the lake’s lower basin, Palaniuk caught his bass over hard bottom with a variety of Rapala crankbaits.

Rotating through a series of spots — mostly hard bottom on long points — New tried to intercept groups of bass as they moved up to feed. One fortunate encounter yielded a 15-minute flurry that included two fish in the 7-pound class, a 6 and a 5.

“I was just running around and trying to get on a place,” New said. “If you get on a place at the right time, and can get them going, it happens that quick.”

New caught his fish on a Spro Little John Super DD, a hollow-belly swimbait and a Zoom Magnum Trick Worm on a Greenfish Tackle football head. His two biggest ate the swimbait.

Chad Pipkens of DeWitt, Mich., is in the lead for Phoenix Boats Big Bass honors with an 8-11 largemouth.

Prince is currently in the lead for the VMC Monster Bag with his 32-5 limit from Day 1.

Palaniuk leads the Progressive Insurance Bassmaster Angler of the Year standings with 442 points. John Cox of DeBary, Fla., is in second with 438, followed by David Mullins of Mt. Carmel, Tenn., with 415, Drew Benton of Blakely, Ga., with 383 and Brandon Lester of Fayetteville, Tenn., with 374.

Saturday’s takeoff is scheduled for 7 a.m. CT at SRA Headquarters — Lake Fork. The weigh-in will be held at the same location at 3:10 p.m. Coverage will be available on Bassmaster.com and the FOX Sports digital platforms. FS1 will also broadcast live with the tournament leaders beginning at 7 a.m.

The Simms Bassmaster Elite at Lake Fork is being hosted by the Sabine River Authority and Wood County Economic Development Commission.

About B.A.S.S.
B.A.S.S., which encompasses the Bassmaster tournament leagues, events and media platforms, is the worldwide authority on bass fishing and keeper of the culture of the sport, providing cutting edge content on bass fishing whenever, wherever and however bass fishing fans want to use it. Headquartered in Birmingham, Ala., the 515,000-member organization’s fully integrated media platforms include the industry’s leading magazines (Bassmaster and B.A.S.S. Times), website (Bassmaster.com), TV show, radio show, social media programs and events. For more than 50 years, B.A.S.S. has been dedicated to access, conservation and youth fishing.