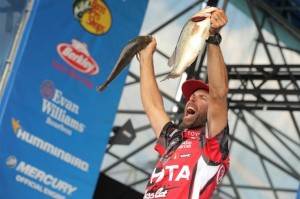 PHILADELPHIA — Michael Iaconelli hopped five feet down off the Bassmaster Elite Series stage, turned and hoisted his 55-pound winner’s trophy, then practically danced with it up through the roaring audience stacked on the concrete steps of the Great Stage of Penn’s Landing.

Moments before, he had told the crowd exactly what he was feeling as he won the Bassmaster Elite on the Delaware River.

“I won today, but not for me. I won for you guys,” said Iaconelli, Philly-born and raised in New Jersey.

Sunday, Ike nailed what few anglers have been able to: win a Bassmaster Elite Series event on home water. He topped that by whipping the field by no less than 8 pounds.

His winning total was 47 pounds, 14 ounces — a respectable weight for any midsummer tournament, and, as Iaconelli pointed out, proof that the Delaware River is a fishery worth any bass angler’s time.

Now living in Pittsgrove, N.J., Iaconelli recovered from a start at 21st place to lead for two days running before triumphing on the fourth and final competition day on the Delaware River, where he learned as a kid what bass fishing was all about.

His prize was $100,000 and an instant qualification for the 2015 world championship, the Bassmaster Classic.

“This is a great feeling to know the Classic is sewn up. Having a Classic berth is a very important thing,” said Iaconelli, who would have had an uphill climb to clinch an entry into the world championship through points earned at each event.

Iaconelli won by having spots to hit at low, mid and high tides.

“That was absolutely key. Every day I was able to rotate when the tides changed to those areas,” he said.

His low-tides spots were on what he called “main river hard stuff’: mostly industrial docks on the main river adjacent to large flats.

“When that water got low, there was no water for those fish to live on the flats, so they all get sucked into that ‘hard stuff’ in deeper water,” he said.

His prime midtide spot was a barge at the mouth of Timber Creek, near where he grew up in New Jersey.

“Every incoming tide, that place lights up because current washes through the barge,” he said.

His hottest ace was having spots to go to during high tides. The best were big concrete drains that bring water in and out of tidal ponds. The drains, only accessible to a caster in high water, have iron grates, but the bass slip between the bars in search of the ponds’ forage, Iaconelli said.

“That was key, because often (high tide) is wasted time for a lot of guys,” he said. “The bass live there. A lot of my fish came actually from inside the metal grates. These are unpressured fish; a lot of people don’t know they’re there.”

Iaconelli, the only angler in the event to turn in four five-bass limits, said he caught 80 percent of his bass — all largemouth — on two lures. One was a 1/2-ounce, small-profile finesse jig, a prototype he’s helping design for Missile Jigs, a new expansion of fellow pro John Crews’ Missile Baits. The color was brown-purple.

“On this river, over the years, small-profile baits do a lot better (job),” he said.

He tipped the jig with a high-action Berkley Chigger Chunk in green pumpkin.

His other key bait was a Berkley Havoc Pit Boss in “Okeechobee craw” — green pumpkin and blue metalflake. The setup on the Pit Boss was a 3/8-ounce VMC tungsten weight and a 5/0 VMC flipping hook.

Iaconelli said the other 20 percent of his catch came on a shaky head rig of a Havoc Bottom Hopper in the junebug color on a 3/16-ounce VMC jighead and a white Molix Lover vibration jig.

“I rotated between all of those baits,” he said.

After leading for two days, the final round started out stumping Iaconelli.

“I made a decision to start on the main river to fish those flats in the low water, and never had a bite,” he said.

He made the call to go into the creeks, where he figured the low water would drive the bass to certain accessible targets.

“I dropped my trolling motor, made two casts, and caught a 3 1/2-pounder,” he said. “Really key. I thought that was the precursor (to more action), but an hour later I hadn’t had another bite.”

He returned to the main river. The first dock he pulled up to yielded a 2 1/2-pounder.

“So I said, ‘They’re telling me to stay on the main river.’ I never had another bite on the main river,” he said. “It was that kind of day, when I scrapped (what I was doing) and started again.”

He gambled and went into a creek near a bridge, where the Molix Lover produced his third bite and keeper.

“I looked at my tide sheet, and it said ‘1:48, outgoing tide.’ I switched to my drains and caught two more keepers in my last hours of fishing.”

Iaconelli now has eight Bassmaster wins on his pro resume, which includes another Elite trophy on Alabama’s Lake Guntersville in 2006. He is the only angler in competition history to have claimed three significant titles of the sport: B.A.S.S. Nation Championship (1999), Bassmaster Classic (2003) and Toyota Bassmaster Angler of the Year (2006).

Elite pros competed for points as well as cash on the Delaware River — a path into the Classic and the only road to the Toyota Bassmaster Angler of the Year crown.

In the points standings, Greg Hackney of Gonzales, La., uprooted the leader over six consecutive events on the 2014 Elite trail, Mark Davis of Mount Ida, Ark. Davis fell to seventh place. Aaron Martens, the 2013 AOY, became Hackney’s strongest challenger, only one tick behind.

Bonuses that Elite pros earned at the Delaware River event were:

* Toyota Bassmaster Angler of the Year Bonus of $1,000 to the leader in the Elite Series points race: Greg Hackney of Gonzales, La.

* Power-Pole Captain’s Cash award of $1,000 to the highest finisher equipped with a Power-Pole anchoring system: Iaconelli.

* Livingston Lures Leader Award of $500 for being the Day 2 leader: Iaconelli.

* Rigid Industries Jackpot: Not awarded. Rigid offers a daily prize of $250 to anglers registered for the program who produce a 25-pound or heavier bag. Unclaimed daily awards roll over into the next tournament day of the season. The jackpot now stands at $1,500.