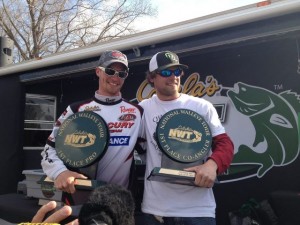 Sprengel, a former winner on the FLW tour, was the only angler who brought in the five-fish limit on both days of the event; weighing 16.69 pounds the first day and 10.12 pounds on the final day.

The winning pro-angler attributes good weather and having a great partner as the key to an enjoyable and successful day on the water.

“We had great weather for the derby, definitely made it enjoyable.” said Sprengel. “My co-angler helped a ton. He was a great advantage during the event.”

As promised, the NWT delivered an unprecedented boat and contingency payout. By winning the first-place prize and participating in the Ranger Cup, Mercury Marine and Cabela’s Angler Cash programs, Sprengel won a total of $71,500.

On the first day of competition Pat Byle, of Colgate, Wis., brought in an impressive 23.76-pound bag of fish to earn the title of Jimmy John’s Freaky Good Catch of the Day. His large bag of fish was enough to take third place despite not bringing a single fish to the final weigh-in. The angler won a total of $17,000.

The winning co-angler Bosch beat a field of 126 co-anglers to take home the $6,000 first-place co-angler prize and added $800 in Angler’s Advantage cash. The angler reported jigging minnows to catch his seven fish.

Second-place co-angler Joe Knight, of Dubuque, Iowa, fished the main channel eddies, pitching plastics to ripraps. The angler’s two-day total of 23.76 won him a total of $3,620.

“Pat Byle had a small spot located that held some big fish,” said Knight. “The river was high but in good shape. The bite was tough but this is something I enjoy and it all came together.”

Third-place finisher Larry Oleson, of Wisconsin Rapids, Wis., weighed a total of 22.87 pounds to win $2,550. The angler used a three-way rig and jigged up river for his fish.

The next NWT event is scheduled for June 14-15 at Port Clinton, Ohio, on Lake Erie. Registration for the event is currently underway. Anglers who are participating in any of the numerous contingency prize programs are encouraged to submit all pertinent information before the event to remain eligible for any potential bonus money.

Each NWT event features over 100% payback. A fully rigged Ranger Boat, plus cash, is guaranteed for first place at each event – a total value of $57,000. Anglers that fish all three regular season events, in addition to the top points leaders, will qualify for the three day, entry-fee Championship.

The new circuit also includes unprecedented television and media coverage, allowing a national audience to watch the action unfold from each event throughout the season. Airing on multiple networks, the National Walleye Tour will be seen on World Fishing Network and Pursuit Channel, as well as the new NBC Sports Network.

For more details, anglers are encouraged to call 612-424-0708 or check out the new website at www.nationalwalleyetour.com. From here, site visitors can register for events, view the TV schedule and learn more about what’s in-store for 2013.