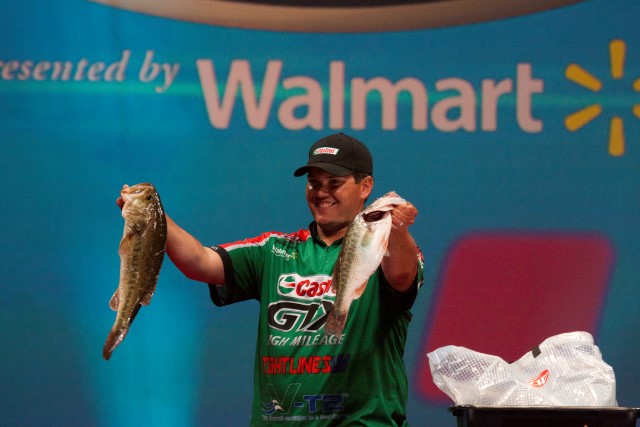 COLUMBIA, S.C. (Aug. 15, 2014) – Forty-five of the best professional bass anglers from across the country continued their four-day competition for a top cash award of $500,000 at the Forrest Wood Cup presented by Walmart, the world championship of professional bass fishing, at Lake Murray in Columbia, S.C. on Friday.

Castrol pro Philip Jarabeck of Lynchburg, Va., crossed the stage with a five-bass limit weighing 17 pounds even to take the lead from his uncle, day one leader Castrol pro David Dudley. Jarabeck’s two-day total of eight bass weighing 26-4 give him a slim 8-ounce lead heading into day three, with Brent Ehrler of Redlands, Calif., right behind him in second place with 10 bass weighing 25-12.

“I’m so blessed,” said Jarabeck, who is fishing the first Forrest Wood Cup of his young career. “To look at the leaderboard and realize that I am leading after day two – I am in absolute disbelief. This is the biggest stage in bass fishing, and to see my name on top – to say I’m pretty excited about it is an understatement.

“I started out this morning fishing shallow,” Jarabeck continued. “I had two nice ones by 10:30 a.m., and then I went deep. The key for me today was just covering a lot of water in the morning, then using finesse tactics out deep later.”

Jarabeck estimated that he burned through at least $100 worth of gas on Friday and he fished 10 to 15 different stretches of the bank early and 20 different places out deep. He said that he caught around 10 keepers throughout the day, but was not ready to divulge any bait specifics. He did hint that his afternoon finesse presentation was one of the main factors in his solid stringer.

“Tomorrow, I’m just going to roll with the punches,” Jarabeck said. “I’m going to go down the bank and try to get lucky catching a big one or two, then I’m going back out deep and hope to finish off my limit with a couple of good ones. I can’t wait to get back out there.”

The top 20 pros that will continue to Saturday’s competition are:

Randall Tharp of Port St. Joe, Fla., won the Bridgford Big Bass Award and $1,000 on the pro side Friday with a bass weighing 6 pounds, 4 ounces.

“I fished as hard as I possibly could over the last two days,” said New, who has earned more than $130,000 fishing as a co-angler in FLW competition. “I just grinded it out. I’ve finished third four times this year, and third in the co-angler of the year standings, but if there was ever a tournament to get over the hump, this was the one to do it. I’ve had such a great and blessed year.”

New said that he caught most of his fish on a prototype Charlie’s Worms finesse worm.

Dehart won the Bridgford Big Bass Award and $500 on the co-angler side Friday with a bass weighing 3 pounds, 8 ounces.

Overall there were 48 bass weighing 99 pounds, 6 ounces even caught by co-anglers Friday.

The 2014 Forrest Wood Cup at Lake Murray presented by Walmart is being hosted by Capital City/Lake Murray Country Regional Tourism.

Anglers will take off from Dreher Island State Park located at 3677 State Park Road in Prosperity, S.C., at 7 a.m. each morning. Weigh-ins will be held at the Colonial Life Arena located at 801 Lincoln St. in Columbia, S.C., beginning at 5 p.m. daily.

Fans will be treated to the FLW Expo at the Columbia Metropolitan Convention Center located at 1101 Lincoln St. in Columbia, S.C., on Saturday and Sunday from 10 a.m. to 4:30 p.m. prior to the weigh-ins. The Expo includes Ranger boat simulators, the Chevy Truck Tour, the opportunity to interact with professional anglers, enjoy games, activities and giveaways provided by more than 40 sponsors, shop the latest tackle and outdoor gear, and learn more about the sport from more than 100 exhibitors. All activities are free and open to the public.

FLW has teamed up with the South Carolina Barbeque Association to feature the “Bass & BBQ” festival presented by The State. Fans enjoying the FLW Expo can sample barbeque from 35 of the state’s top barbeque teams Saturday and purchase their favorites directly from the teams Sunday. Five dollars will get you five 2-ounce samples on Saturday.

Country artist Jeremy McComb will perform on the outdoor stage in the “Bass & BBQ” festival at 2 p.m. Saturday followed by country artist John Wesley Satterfield at 2 p.m. on Sunday.

Also on Saturday and Sunday, 500 free rods and reels will be given away each day to the first 500 children 14 years and under who are accompanied by an adult. The rod and reel giveaways are courtesy of WLTX News 19. One lucky fishing fan will win a Ranger Z521C powered by a 250-horsepower Mercury outboard. The Ranger boat giveaway is courtesy of 97.5 WCOS-FM and is free to enter, but the winner must be present at the conclusion of Sunday’s final weigh-in to win.