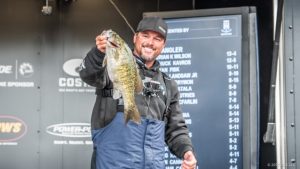 SOMERSET, Ky. – Pro Scott Martin of Clewiston, Florida, weighed a five-bass limit totaling 19 pounds, 7 ounces, Thursday to grab the early lead at the FLW Tour at Lake Cumberland presented by T-H Marine. Martin will begin day two with a slim 10-ounce edge over Cody Bird of Granbury, Texas, in the four-day event that features 164 of the world’s best bass anglers competing for a top cash award of up to $125,000.

“I’m basically working through a 15-mile stretch of bank,” said Martin, a 15-time Forrest Wood Cup qualifier who has earned more than $2.5 million in FLW competition. “The smallmouth like the main-river stuff and the largemouth like to be in the backs of creeks, so you have to mix it up a little bit. I bounced back and forth and fished a lot of new water. Half of the fish I caught today were in water I’ve never been in. It just looked good.”

Martin said bass were found in a variety of locations including small points and straight stretches of bank.

“A new pattern developed today in terms of where these fish were congregating, and that helped me,” said Martin. “Everything has changed a little bit due to the weather and temperature. I targeted smallmouth and caught a couple in the morning, but wasn’t sure if I could get a limit. The 18-inch minimum is a big deal.”

Martin’s limit ended up consisting of four smallmouth and one largemouth bass.

“I didn’t catch many short fish today, but I also didn’t get a lot of bites,” said Martin. “When I did, they were pretty good ones. You just had to fish the conditions.”

On day two, the Florida veteran said he plans on navigating even more new water.

“You just have to fish a little loose,” said Martin. “If I’m lucky, I could get another big limit of smallmouth, but I’m not expecting to catch them where I fished today. There’s largemouth and spotted bass in the area as well, but not necessarily in the same spot. I’m just going to have to keep bouncing back and forth.”

The top 10 pros after day one on Lake Cumberland are:

Scanlon earned the day’s $500 Big Bass award in the Pro Division thanks to a 6-pound, 6-ounce fish.

The top 10 co-anglers after day one on Lake Cumberland are:

Jerry Hayden of Hattiesburg, Mississippi, earned $250 for the Big Bass award in the Co-angler Division with a 5-pound, 2-ounce fish.

Prior to the weigh-ins Saturday and Sunday, fans are encouraged to experience the free Family Fishing Expo at General Burnside Island State Park from noon to 4 p.m. The Expo is a unique opportunity for fishing fans to meet their favorite anglers, enjoy interactive games, activities and giveaways provided by FLW sponsors, and learn more about the sport of fishing and other outdoor activities.

Youth are also invited to participate in the free FLW Foundation’s Unified Fishing Derby at the Ruckel’s Restaurant Pay Lake, located at 192 KY-70 in Eubank, Kentucky, on Saturday, April 8, from 9-11 a.m. The event, hosted by FLW Foundation pro Cody Kelley along with other FLW Tour anglers, is free and open to area youth 18 years of age and younger and Special Olympics athletes. Rods and reels are available for the first 50 participants to use, but youth are encouraged to bring their own if they own one.