It’d be difficult to dispute that any angler in the history of pro fishing has cashed more paychecks from catching spawning bass than Shaw Grigsby. He’s won nine B.A.S.S. events, and nearly all of those victories were

So perhaps it’s the confidence derived from 30 years of sight fishing success that found the highly likeable Florida pro unrattled to begin the Bassmaster Elite Series event on Toledo Bend – despite weather that shifted from light winds and warm sunshine during practice – to a break-out-the-jackets cold front with temps in the 40s at the start of competition.

If a 25 degree dip in temperature wasn’t enough to rattle the nerves of less experienced anglers – how about the raging northwest winds that had been blowing during the night to muddy-up the shallow waters Shaw may have planned on fishing?

Still, no worries. Grigsby’s got a plan.

First, Mark a Lot of Spots

“I have nearly 200 waypoints saved from spawning bed locations I found in practice,” says Grigsby. “The wind doesn’t bother me because there’s always somewhere to get out of the wind, and I worked hard enough in practice to find a ton of beds, so I’ve got plenty to choose from that are not in the wind.”

“Now, 200 beds might sound like a crazy number. But you have to realize, just because I found that many, doesn’t mean they translate to catchable fish in the tournament,” says Grigsby.

“So even if you’re fishing a single day local tournament, I can’t stress how important it is to try and get out to scout a day or two before your tournament to identify as many beds as you possibly can,” advises the winner of $2 Million in career prize money. 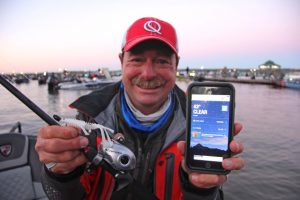 How Shaw Grigsby Deals with Cold Fronts in the Spawn

“It’s critical to not get in a hurry on mornings like this when cold fronts roll through during the spawn, because let’s face it, 43 degrees is not real conducive to making shallow spawners active at sunrise,” reasons Grigsby.

“I’m going to go check one bed I found right away because it’s got an 8-pounder on it – but after that, I’ll focus on the deeper water pattern I found nearby while it’s cold this morning, until the sun gets higher and things start to heat up in the shallows.”

“I’ll take strong winds any day over hard rains, because again, if I’ve done my homework, I’ll likely have beds located that weren’t affected by wind. But if it rains hard, that’s a big time problem, because it doesn’t discriminate – hard rains tend to trash out everything, and if that’s the case, you’re better of fishing a little faster rather than struggling to see spawners,” says Grigsby.

Luckily, rain won’t be an issue at Toledo Bend. Forecasts call for sunny skies and temps near 80-degrees with lighter winds – which is just about perfect for knowledgeable bed fishing anglers like Grigsby to heat up the leaderboard.