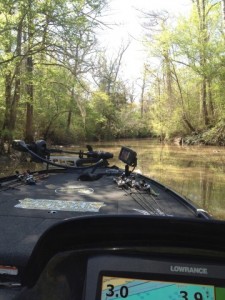 Bertrand Idling his Nitro Z9 through a Sabine River Tributary

A couple of weeks ago; prior to the first event of the 2013 Bassmaster Elite Series, we ran a story about Arizona Elite Series rookie Josh Bertrand’s process of “Becoming Elite.”  Now that the first two events of the 2013 season are behind him, we can begin to look at how his progress has been.

The season began with what statistically will go down as the second toughest fishing event in Elite Series history.  The amount of fish caught, number of anglers that failed to catch a keeper and the number of limits weighed in were the second lowest since the Elite Series began in 2006.

Contrast that with a trip to Falcon Lake; which had produced the heaviest winning four-day, five bass limit weight in B.A.S.S. history in 2008, was tougher, but still produced heavy stringers, and found anglers eclipsing the century mark for their four-day weights.

Bertrand held his own; in fact, he actually did better than that.  In his first event, he finished in 67th place; out of the money, but respectable.  In his second event at Falcon, he finished fourth, and missed getting a century belt by 14 ounces.

By the time the first two events were complete, Bertrand would be leading the Elite Series Rookie of the Year Race, but more importantly, he stands 25th in the Toyota Tundra Bassmaster Angler of the Year Points Standings.

Not a bad start for a kid hoping to just be competitive out of the gate.

Sabine River
With the knowledge that the first event was likely going to be difficult, Bertrand took some of his pre-scouting knowledge and went to an area that he had found out was known for producing better quality fish.   He said he caught two keepers early in the area, but struggled to find bites in other areas.  “By the time I was done with all three days of practice, I had caught five keepers,” he said.  “Two of them came from the area that I researched, so I decided to start there.”

He went there the first morning of the event, making a 75-mile run to get there.  He admitted to experiencing a great deal of nerves on his first day on the job, but not because of the fishing.  “I knew where I was going, but I hadn’t run there on the water from the launch site,” he said.  “I was nervous that I would make a wrong turn, or not see a no wake zone that would cost me, so I went there feeling anxious pretty much the whole time.”

As it was, he almost did run a no wake zone.  Had he not followed another competitor’s boat who shut down at a no wake zone, he would have not seen one and gotten disqualified for the day.  But, he got to his water with no problem, settled down and started fishing.

He was able to coax three keepers into the boat by noon.  He said he was using a 7’3″ medium-heavy Temple Fork Outfitters Tactical Series rod matched with a 7.1:1 Abu Garcia Revo STX and 17-pound-test Berkley Trilene 100% Fluorocarbon line to toss a black and blue Z-Man Elite Chatterbait and sapphire blue Berkley Chigger Craw.  He lost one other keeper, but  managed to weigh 6 pounds, 9 ounces; which had him in 34th place in the standings.

Unfortunately, he would catch only small fish on day two, lose a few fish that he thought were keepers and fail to weigh-in a keeper on day two.  He would finish 67th for the event; out of 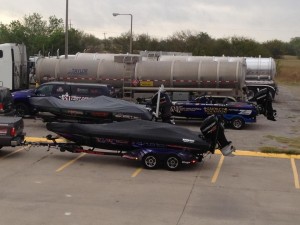 Josh Bertrand’s Rig in Parking Lot with some Elite Friends’

the money, but would work the Expo for Pure Fishing and the 17,000 fans that arrived on Saturday, then head towards Falcon Lake.

Falcon Lake
He went to Falcon intent on fishing structure for the event.  “So many of the events on the lake are won out deep, so I figured that would be the best chance to do well,” he said.   “It took me until halfway through the last practice day to find them, but I found some good fish on a spot, and decided to make it my area for the tournament.”

He had a good day on day one, weighing 30 pounds, 5 ounces and sat in third place.  His offshore spot produced, but as the event wore on, he started to deplete the fish there.  His weight would decrease each of the next two days, but he would bring enough across the scales to outlast Alton Jones by one-ounce and make the Elite 12 cut in his second event.

He caught his bass on two techniques; deep cranking and Carolina Rigging two different lures.  He used a Citrus Shad SPRO Little John DD on a medium action 7’9″ TFO Tactical Cranking rod, a Revo Winch and 12-pound-test Trilene 100% Fluorocarbon.  He threw a 10-inch Berkley Power Worm in Plum and a 7-inch soft stickbait on his Carolina Rig.  He rigged that on a 7’3″ TFO Tactical casting rod, a Revo STX and 20-pound-test Trilene 100% Fluorocarbon.

He said that it was really cool to have his first big event in the one that one of his sponsors was the title sponsor of.  “Rigid Industries was the presenting sponsor of Falcon Lake, and it felt really good to perform well in that event,” he said.  “To be there on the final day at that event meant a lot to me.  I couldn’t be out here without them or any of my sponsors, but it was cool to do well in their event.”

The Experience
Bertrand said that he has mixed emotions when talking about the experience of his first event on the Elite Series.  Obviously, he was disappointed to have put himself in position to make the cut in his first event, then struggle on day two.  Even with that, he said he would have liked to have been able to take in the experience.  “I was really nervous at the Sabine,” he said.  “I really didn’t have a chance to take it all in and enjoy the experience.  I did at Falcon a little bit more, but I would have liked to been more aware at the Sabine River.” 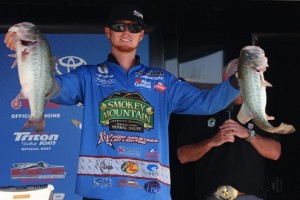 He said he was amazed at how hard they work at it.  “They really practice as intensely as they compete,” he said.  “It is daylight to dark, and you can’t take any time off, or they will eat you alive competitively.”

He also said their ability to perform at the level they do is another thing that impressed him.  I couldn’t believe how they could be so consistent at a fishery like the Sabine River,” he said.  “They really put things together and improve from day to day.”

While his competitors showed their drive on the water, he said that he was pleasantly surprised at how warm and helpful they all are off the water.  “Gary Klein has been one of my heroes since I was a kid, and he walked up and high-five me and congratulated me at Falcon,” he said.  “I got great encouragement from Skeet Reese, and of course John Murray and Clifford Pirch, who are pros I look up to from home, and others, but they were all really cool to me.

“I feel pretty good about the way the season started, but I know there’s a long road ahead; I can’t wait to get the rest of the season underway.  It will be a lot of work, and a lot of learning, but I’m ready for it.