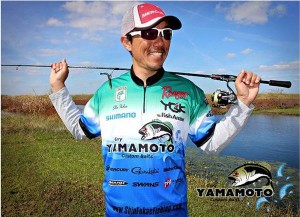 Gary Yamamoto Custom Baits, a legendary manufacturer of high performance fishing tackle, announced today that the company will serve as the title sponsor for veteran pro Shinichi “Shin” Fukae in 2015. Both Fukae and 1983 Bassmaster Classic champion Larry Nixon will run GYCB boat wraps on the FLW Tour this year.

“With our long relationship with Shin both here in the United States and while he was fishing in Japan, this title sponsorship just made sense,” said Ron Colby, GYCB VP of Operations. “His success in the United States with some of our Japan-only products encouraged us to release these items and colors here and they have become very popular, especially his favorite the Shad Shape Worm. We are currently working with Shin to add colors to his favorite lures and to bring out some unique styles that he has been working on.”

Fukae turned pro in Japan in 1991, and shortly thereafter won an Angler of the Year title in his native country. He moved to the U.S. in 2004 and won the FLW Tour AOY title as a rookie, thus making him the only angler with two such major titles from different countries. Over the course of his career at FLW, Fukae has won three tournaments and has competed in the Forrest Wood Cup on nine occasions. Last year he won the season’s second Bassmaster Northern Open, thereby qualifying him for the 2015 Bassmaster Classic, which will be his first shot at that major title.

“I’ve been using Yamamoto products since I was a kid in Japan,” Fukae said. “I first met Gary and Beverly over 10 years ago and our friendship and business relationship continues to grown. As many fishing fans know, I enjoy finesse fishing so the partnership with Yamamoto is a great fit. The Senko and the Shad Shape Worm in particular have enabled me to earn lots of checks over the course of my career. I can’t wait to win more tournaments with Yamamoto products.”

His next chance to win with Yamamoto will be at the 2015 Bassmaster Classic on South Carolina’s Lake Hartwell, a venue where he has substantial tournament experience. It promises to be a big weight pre-spawn event, but anyone who counts Fukae out because of his finesse skills isn’t taking stock of his true skill set – in addition to winning on traditional tough venues like Beaver Lake, he’s also won a slugfest at Okeechobee and twice at Champlain. Don’t be surprised to see him sporting his GYCB jersey at the winner’s press conference.

Gary Yamamoto Custom Baits, based in Page, Arizona, makes tournament-tested fishing tackle that can be used effectively by novices and champion anglers alike. The company produces a wide range of products, most notably soft plastics baits such as the Hula Grub and the Senko, two first-of-their-kind lures which remain the standard-bearers for their categories today. GYCB has recently expanded its soft plastics lineup substantially and added a new lineup of hard baits. Look for new game-changing product developments in the near future.

For more information about Shinchi Fukae, go to www.shinfukaefishing.com