TYLER, Texas (April 10, 2022) – Hot Springs, Arkansas pro ”The Puma” Stephen Browning, caught 16 scorable bass weighing 51 pounds, 4 ounces to grab the early lead for Group B in the Qualifying Round of the General Tire Heavy Hitters Presented by Bass Pro Shops at Lake Palestine. The six-day all-star event showcases the 32 pros that qualified from the Bass Pro Tour competing for a purse of more than $500,000, with a top 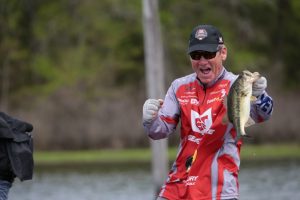 prize of $100,000 to the winner along with massive Big Bass Bonus payouts.

Redlands, California pro Brent Ehrler, caught an 8-pound, 5-ounce lunker that was the heaviest bass of the day Sunday. The big fish engulfed Ehrler’s frog midway through the third period. If Ehrler’s fish remains the largest bass weighed by Group B after the conclusion of the two-day Qualifying Round on Tuesday, he will take home a $25,000 Big Bass Bonus. Big Bass Bonuses are awarded throughout the competition, with payouts of $25,000, $50,000 and $100,000 being awarded for the single biggest fish in the Qualifying, Knockout and Championship rounds.

Browning will bring a 18-pound, 6-ounce, lead over second-place pro Jordan Lee of Cullman, Alabama, into Tuesday’s second day of competition in the Qualifying Round for Group B. Lee landed 10 scorable bass totaling 32-14, while pro Jeff Kriet of Ardmore, Oklahoma, rounds out the top three, catching nine bass weighing 28-2 to end the day in third place.

“Today was so fun – exactly how I grew up fishing, this time of the year on the lower Arkansas River. It just felt like home,” Browning said. “I had several bites, and some quality, and anytime I can put a Z-Man (ChatterBait) Jack Hammer in my hand and they’re biting it, we’re going to hold our own.”

Browning spent most of his day Sunday throwing the vibrating jig and targeting fish spawning on the numerous backwater stumps.

“Some of the water I’m fishing is about 2½ to 3 feet, and some of it is only 2 feet,” Browning said. “When I get into that 2-foot range, I put the (Z-Man) DieZel MinnowZ on the back end of it. When I’m fishing a little bit deeper, I can get away with the (Z-Man) RaZor ShadZ. I’m throwing a 3/8-ounce Jack Hammer – bluegill-colored – with my 7-foot 10-inch Extra Heavy Moderate St. Croix Legend Tournament (Bass) series rod.

“On Tuesday we’re going to go with a little softer rod – probably a heavy-moderate – just to lighten it up a little bit, so when I set the hook on these fish I don’t bring them to the top like I did today,” Browning continued. “We had a little misfortune – one took our bait from us, and I’d missed that fish earlier on a crankbait off that same bush. So, if we can get her to bite before the day is over, we might even give Ehrler a run for his money on that 8-pounder.”

Second-place pro Jordan Lee had a very successful first and second period before his day slowed in the afternoon. Lee caught all of his fish Sunday throwing a frog.

“I’m definitely excited about second, but I’m even more excited about how I was catching them today,” Lee said in his postgame interview. “I caught them on a frog – I used a white one early, then switched to a black one when the sun got up. I used my (Abu Garcia) Signature Series Frog rod – it’s a 7-foot, 3-inch heavy – with 50-pound-test Berkley X9 braided line with an (Abu Garcia) Revo Premier reel . And just made casts to where I feel like a lot of guys weren’t throwing a bait.

“It wasn’t automatic, but I had a really good two periods doing that. Overall, I’m excited about what I found and definitely have something to build off of for Day 2,” Lee went on to say.

Oklahoma pro Jeff Kriet mainly fished in the mid-lake area, having a lot of water to himself and catching most of his fish on a worm.

“I started off this morning before the wind got up and I was swinging around a wacky-rigged Yamamoto Senko with a 1/0 Gamakatsu (G-Finesse) weedless hook,” Kriet said. “I’m catching them way up in the grass, and you’d be amazed at how weedless that hook is.

“When it got windy, I had to go to flipping a weight and I switched to McClelland’s (Gamakatsu G-Finesse) Hybrid hook,” Kriet continued. “I didn’t lose any fish today, and in this much wind that is hard to do. All in all it was a good day, a challenging day with the wind, but I’m really happy and I fished good.”

The standings for the 16 pros from Qualifying Group B on Lake Palestine are:

Full results can be found at MajorLeagueFishing.com.

Overall, there were 96 bass weighing 291 pounds, 14 ounces caught by the 16 pros Sunday, which included one 8-pounder, one 7-pounder, and two 6-pounders caught from Lake Palestine.

The 16 anglers in Group A compete in their two-day qualifying round on Saturday and Monday – the 16 anglers in Group B on Sunday and Tuesday. After each two-day qualifying round is complete, the anglers that finish in 2nd through 8th place from both groups advance to Wednesday’s Knockout Round, while the winner of each group advances directly to Thursday’s Championship Round. In the Knockout Round, weights are zeroed and the remaining 14 anglers compete to finish in the top 8 to advance to the Championship Round. In the final day Championship Round, weights are zeroed and the highest one-day total wins.

Anglers will depart at 7 a.m. from the Villages Marina, located at Big Eddy Road in Flint, Texas. Anglers are allowed to trailer to any boat ramp of their choosing on Lake Palestine, but competition begins with “lines in” at 8 a.m. Each day’s General Tire Takeout will be held at the Marina, beginning at 4:30 p.m. Fans are welcome to attend all launch and takeout events and also encouraged to follow the event online throughout the day on the MLF NOW!® live stream and SCORETRACKER® coverage at MajorLeagueFishing.com.

Fans are encouraged to come out and celebrate with the professional anglers from the Bass Pro Tour starting at 3:30 p.m. on Thursday, April 14 at the Villages Marina in Flint, Texas, as they crown the champion of the General Tire Heavy Hitters 2022 Presented by Bass Pro Shops. The first 50 children at the event will receive a free Dora the Explorer rod and reel, and the first 50 High School Fishing anglers will receive a free Abu Garcia rod and reel combo valued at $100. Free food will be provided for all, and the Bass Pro Tour anglers will be on hand to meet and greet fans, sign autographs, take selfies and participate in tackle giveaways.

The General Tire Heavy Hitters 2022 features anglers competing with a 2-pound minimum weight requirement for a bass to be deemed scorable in the Qualifying and Knockout Rounds, but for the final day Championship Round a bass must weigh at least 3 pounds to be deemed scorable. Minimum weights are determined individually for each competition waters that the Bass Pro Tour visits, based on the productivity, bass population and anticipated average size of fish in each fishery.

To qualify for the General Tire Heavy Hitters 2022 event, the weight of an angler’s single-largest bass from each event of the seven 2021 Bass Pro Tour events was recorded. The 32 anglers with the heaviest five big-fish totals from those seven events qualified to compete in this event.

The MLF NOW!® broadcast team of Chad McKee, Marty Stone and J.T. Kenney will break down the extended action on all five days of competition from 7:45 a.m. to 4:30 p.m. MLF NOW!®  will be live streamed on MajorLeagueFishing.com and the MyOutdoorTV (MOTV) app.

Television coverage of the General Tire Heavy Hitters 2022 Event will be showcased across six two-hour episodes, premiering at 7 a.m. ET, July 16 and running each Saturday through August 20 on the Discovery Channel. A one-hour special episode of MLF Inside Heavy Hitters will also air on CBS in late 2022. New MLF episodes premiere each Saturday morning on the Discovery Channel, with additional re-airings on the Outdoor Channel and the Sportsman Channel. Each two-hour long reality-based episode goes in-depth to break down each day of competition.