This Has Got to Change – Editor’s Opinion 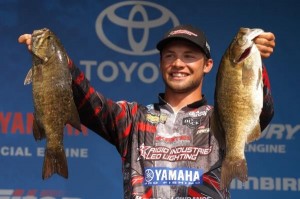 Our normal charter here at Advanced Angler is to focus on the how to aspects of our sport.  We try to live up to our motto of Elevating Fishing to the Next Level and let the Elite, FLW Tour pros, guides and industry representatives help you (and us) become better anglers.

With the exception of the Bassmaster Classic, the Forrest Wood Cup and ICAST, we don’t cover fishing tournaments on a daily basis, other than running the press releases broadcast by the organizations.

It’s not that we couldn’t, there just happen to be people that we respect doing it, and rather than competing with the organizations, and our friends at BASS ZONE.com, Outdoors First who have boots on the ground at every event, and Bass Fan, who do a great job remotely, we focus on our charter.

Along with that mode, I also typically stay away from putting out opinion pieces for the most part.  But, with what happened this past week, and at other times at tour level events in the past, I need to get something off my chest.

Some stark events that I can remember involved this past weekend’s happenings with Brandon Palaniuk, in 2011 to Skeet Reese, and in the 90’s with Mike Folkestad at a U.S. Open of Bass Fishing.  An infraction this past weekend quite possibly cost Palaniuk a win, and certainly cost Reese an Elite 12 finish in 2011, and who knows what is cost Folkestad at Lake Mead.

Palaniuk lost his entire day two weight because he unknowingly culled inside Minnesota waters ( a state law prohibits culling), and Reese lost his day three weight at Wheeler Lake in 2011 when he found a sixth fish in his livewell after weigh-in was over.  Folkestad was fishing close to takeoff in Calville Bay and caught a fish that caused him to cull.  While culling, the winds – which can be stiff on Lake Mead – blew him over the Calville Bay Marina buoy line momentarily.  He was protested for culling in the host marina by another competitor.

In all cases, the punishment was a disqualification that resulted in the loss of that day’s weight.  All three anglers had their events completely altered.

To be clear, I’m not pointing a finger at anyone for protesting.  B.A.S.S. has a rule that requires contestants to report a rule infraction they witness or face disqualification themselves.  Also to clarify, I am not saying officials handled these situations improperly.  The rules are the rules, and they have to work with what they have at their fingertips.  I’m also – in the case of Palaniuk – not bringing up whether or not the law in Minnesota that prohibits culling should be changed.  The point is that the law is, what it is – now.

My point is, I think that it’s time our sport adopt another type of penalty for infractions. 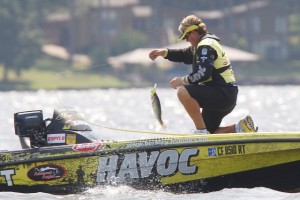 Not Yesteryear
Part of the reason I feel the leagues need to adopt a new way of penalizing anglers is because of the anglers themselves.  This is no longer a time where tournaments carry the stigma of fishing derbies of old.  This generation, thanks to the efforts of the anglers a generation ago, has become bona fide professionals.

Before Rick Clunn, Denny Brauer, Larry Nixon, Bill Dance, Roland Martin, Jimmy Houston and their cohorts made fishing a profession that entailed endorsements, television shows and such, bass anglers more closely resembled backstreet fighters.  In fact, Ray Scott; the founder of B.A.S.S.,  has been quoted as saying, “a pro bass angler is a man with a week off of work and enough money for an entry fee.”

We have gotten past that phase.  Sure, there are anglers who hold down full-time jobs, they commit tens of thousands of dollars and sometimes a third of their years to compete.  But, we also have many anglers who truly make their whole living at this sport, and with the amount of publicity, the amount of money at stake for these guys, our system of governing needs to not cost a guy  more than a month’s salary for most people because of an infraction.

Of course, there are more serious rules that get broken that require harsh penalties, but for the most part, disqualification of a day’s weight, or an event should be reserved for those egregious violations of the rules.

What is the Answer?
I’m sure you’re all asking me in your mind what I think the answer should be.  If asked directly, I would have to say that I don’t know what the answer to it is.  I know I’ve seen examples of rulings that were made that impacted an angler, but did not completely ruin their ability to earn a payday or accumulate real points in the standings.

At the 2008 PAA Corporate Cup, an angler was protested for moving inside of the buoys at Wilson Dam and fishing without their PFD on.  There are signs that inform anglers that it is a state law that anglers wear life preservers inside the signs because of the fact that the gates could open at any time creating hazardous and life threatening currents.

One of the competitors was fishing down the banks outside of the signs on and as he was moving down the bank, he realized when he looked across to the other shore, that he had crossed the line.  This was a state law that could have resulted in his team’s disqualification, and thereby the forfeiture of their entry fee.  Instead, the angler was penalized by having to remain at the dock for a 30 minute delay at blastoff.

Major League Fishing has decided that an angler has earned the weight they have put on their leaderboard, and instead of removing an angler’s catch, they would instead give anglers a time penalty in the middle of the fishing day.  Of course, Major League Fishing has the luxury of having a small field that technology can aid in the policing, but some of those things can be adopted into the leagues with large fields.

I’m not sure what the answer is, but I certainly hope that someone is looking at it.  Because; while everyone involved was doing the best job they could with the Palaniuk situation this past weekend, to see an angler lose something as  memorable and historic as a win because he crossed a state boundary is tragic. 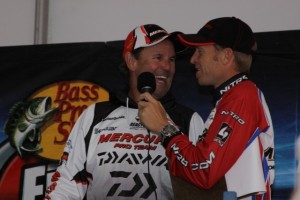 It’s not that dissimilar to the conversation between Tom Cruise (Maverick) and Tom Skerritt’s (Viper) characters in Top Gun when they were discussing how Maverick’s father passed away.

Viper:  “I flew with your old man. VF-51, the Oriskany. You’re a lot like he was. Only better… and worse.  He was a natural heroic son of a bitch that one.”
Maverick: “So he DID do it right.”
Viper:  “Yeah, he did it right… Is that why you fly the way you do? Trying to prove something? Yeah your old man did it right. What I’m about to tell you is classified. It could end my career. We were in the worst dogfight I ever dreamed of. There were bogeys like fireflies all over the sky. His F-4 was hit, and he was wounded, but he could’ve made it back. He stayed in it, saved three planes before he bought it.”
Maverick: “How come I never heard that before?”
Viper: “Well that’s not something the State Department tells dependents when the battle occurred over the wrong line on some map.”

The anglers in this sport have a hard enough time making a living as it is, it might be time to look at how punishments are adjudicated.   Other sports have penalties that do not necessarily completely change the outcome of the game with one small decision, and it would be nice if bass fishing had the same.