Steve Yatomi is the operator of Adventure Travel Alliance, an outfitter that specializes in fishing and hunting experiences all over the world. The past two years, Yatomi has hosted Bassmaster Elite Series pro Skeet Reese and a pair of Major League Baseball veterans on fishing expeditions. In 2011, the group went to the Amazon to chase peacock bass, this year they went after golden dorado in Argentina. Below is a special report on the trip by Yatomi. 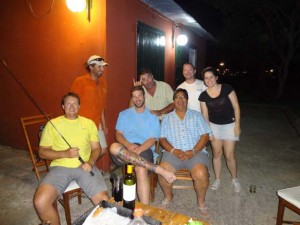 I talked with Skeet looking to travel somewhere different as we traveled to the Amazon the year before, I suggested La Zona in Argentina for monster Golden Dorado he talked with the guys and they agreed to visit La Zona. We would travel with the team of Skeet Reese – winner of the Bassmaster Classic, Chris Carpenter, a two-time World Series winner, Cy young winner and three-time All Star, Roy “Doc” Halladay, a two-time Cy young winner and eight- time All Star, Jason Iches, Carpenter’s brother in law.

We arrived in Argentina on a bright and sunny day, the guys had a half day city tour and I met Rodrigo and Carlos Of La Zona for lunch. After a long flight and a long day we had dinner at Cabana Las Lilas at Puerto Madero one of the best restaurants in Buenos Aires and had some excellent beef and malbac. The guys enjoyed their meal.

We went back to the hotel to get good rest before flying to Concordia in the morning. Our flight was slightly delayed about a half an hour and we landed and Ramiro met us and we proceeded to Tres Sietes lodge, it had rained as the roads were all muddy, and we spent the afternoon prepping tackle.

We had scheduled a capybara hunt but because of the rain we had to change venues to a location in Corrientes province and these were big elusive Capybara, Skeet and Jason both took one. For this special trip Skeet again had some special custom yellow Skeet rods made up for dorado fishing which proved to work out very nice.

Before the trip I had emailed to my good friend Hector called in a favor and ask him to guide on this trip for us, our team of guides were Hector, Matias, Alejandro and Elvio during our stay. Our first day fishing was a good one with an overcast sky, very low water and the barometer dropping, fishing was very good everyone caught golden dorado. some up to 40 pounds. Chris caught his first 30-pound dorado as Jason caught a 28 pounder. When you fish golden dorado you only land about 30 percent as soon as you hook them they are in the air. In testing my new camera I found to have caught many jumping fish with lures flying in the air. 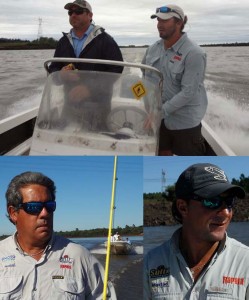 Day two was a good one I was on the boat with Skeet and Chris. Skeet landed a 40 pounder and 50 pounder this day. Chris had a nice day but no monster fish. Doc and Jason each had a good day with three fish in the 30lb class. I have fished with a lot of anglers around the world and I must say that being on the water with Skeet was so much fun and informative. It was interesting coming back to the lodge and watching Roy and Chris work out and play catch critiquing each other’s pitches. Chris, Doc and Skeet are down to earth and very nice and respectful. Chris is always making an effort to communicate in Spanish as he was the ambassador for the trip taking the lead.

Day three was a slow day. We opted to fish eight straight hours from 8:00 AM it was a long slow day for dorado’s so we went boga fishing, and this was very productive. The guys wanted to coming in early for a workout. I was trying to explain to them how good the next was going to be, but after having a slow day and a hot one to boot they all seem to have long faces. It was a long day with little activity, but I was chuckling inside because I knew what tomorrow was going to bring.

The meals there are excellent, but some are complaining it’s too much and were all gaining weight. In the evening we all hung out in the front porch and Chris left and went to the back where Hector, Mataus, Fany and Tano were cooking up some surubi that Jason caught and sharing stories. So, Skeet, Jason and I went looking for Chris and ended up joining them. It was a night to remember with meeting new friends and new experiences in Argentina. Doc being the dedicated dad he was he was watching his son play at his all star game on the internet.

On Day four we awoke bright eyed and sort of bushy tailed after a long night. After breakfast we started at 8am and we all could see that the dam was flowing nicely, birds working in three or four groups around the dam. For the morning session I was with Skeet and Doc we went to the center section of the river and it was conditions similar to class three rapids Skeet and Doc were fishing Lucky Craft prototype crankbaits with Skeet on his knees and Doc sitting on the ice chest, Skeet and Doc screaming and hooking fish, losing some, landing some.

On the other boat Chris and Jason had an epic morning as they worked the rocks on the Argentinean side and caught a 52 pound dorado that proved to be the biggest of the trip and lost an even bigger one they couldn’t stop before it ran around a rock, Chris also caught a 40 plus that day plus many in the 20-pound class. Jason did well and held his own.

We came in for our lunch and talked about everyone’s morning experience and everyone was in awe, the fishing was excellent. It was like a light switch and it was turned on that day. Everyone reloaded their tackle boxes. 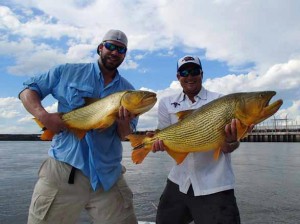 The afternoon session was Skeet and Chris and I. Jason and Doc in the other boat. This is the afternoon that I will always remember Skeet fishing the topwater in the late afternoon. You could see from afar a cold storm was coming in from the south and a big warm storm coming in from the north as the day went on the day grew ominous and the barometer was dropping, flashes of lighting coming closer the fish started to go on the bite.

Jason landed a 45+ dorado and a couple in the high 30+ class Doc caught a 38lb dorado. They lost a big fish estimated in the 50lb class. It was fun watching Skeet cast as fast and as far as he could, each cast precision landing right on the spot then KABOOM Skeet would just scream did you see that, did you see that?

We would have three four five fish follow his bait exploding he’d scream and empty his lungs. Being on the water with him seeing his intensity, enthusiasm, his talent and mechanics of casting was special for me. It was nice watching Skeet enjoy one of the best topwater and crank bite that he had ever experienced.

On the trip everyone spend a lot of time laughing with Skeet’s “One more cast” and you could hear Hectors voice SkeeeeeT wait, oops too late. Now we just finished the last cast and were driving back to the lodge the two weather systems collided and all hell broke loose. 40 mile per hour winds and the sky just opened up and dumped sheets of rain and knock out the power for the night. 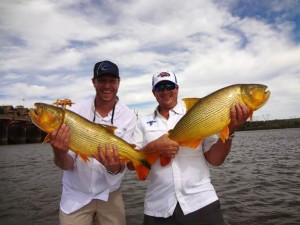 We all left La Zona with a sense of fulfillment, big fish, sore muscles and we all gained weight. Certainly a trip I will always remember.