Randall Tharp Sets the Pace at FLW Cup Day One

SHREVEPORT, La. (Aug. 15, 2013) – Forty-six of the best professional bass anglers from across the county began their four-day battle for a top cash award of $500,000 at the Forrest Wood Cup presented by Walmart, the world championship of bass fishing, at the Red River in Shreveport/Bossier City on Thursday. 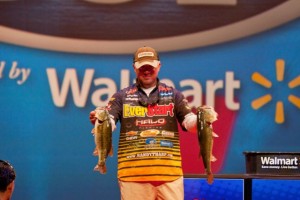 “Believe it or not, it started off pretty badly for me today,” said Tharp, who finished in second place at the 2011 Forrest Wood Cup. “I had been catching them really quick in practice, but today I didn’t put my first fish in the boat until 10:30 a.m. But, from 10:30 until 2 p.m., it was pretty special. Once they started biting I caught a limit fairly quick. Then I was able to fish this one little area, and was able to put the smack down on some good ones.”

Tharp said that he had tried to visit his area earlier in the day, but there were already boats fishing it.

“I had 15 or 20 different places that I had planned on rotating through during this tournament,” Tharp said. “I went to my best spot first, but there was a boat there. I went to my second and third spots, and there were boats on both of them. I got stuck in a bit of a bad rotation. I started running some new water, then went back and visited those places later. They had r

ested, and the fish had repositioned where I could catch them.”

Tharp was not ready to divulge any specifics about areas or baits, but did say that he was doing something different and that it was a key for him.

“Nobody else is doing what I’m doing,” Tharp said. “I feel real comfortable fishing here. I had a top-5 finish here in a tournament earlier this year, and tomorrow I plan on fishing an area that I fished during that tournament. I was able to get a limit there pretty easily in practice, and I feel like if I can catch another limit tomorrow it should be good enough to get me fishing on day three.

“It’s all about timing out there,” Tharp went on to say. “My big fish didn’t bite until later in the afternoon today, so I’ll be in those areas at the right time tomorrow. If I can put some fish in the boat early, it’ll settle me down. I can never be fully comfortable when I’m fishing against these guys, especially when Bryan Thrift is right behind me.”

The top 20 pros after day one on the Red River are:

Fans will be treated to the FLW Expo at the Shreveport Convention Center located at 400 Caddo St. in Shreveport, La., on Friday, Saturday and Sunday from 10 a.m.-4:30 p.m. prior to the weigh-ins. The Expo includes Ranger boat simulators, the opportunity to interact with professional anglers, enjoy interactive games, activities and giveaways provided by sponsors, and fans can learn more about the sport of fishing and other outdoor activities. All activities are free and open to the public. On Saturday and Sunday, 500 free rods and ree

ls will be given away each day to the first 500 children 14 years and under who are accompanied by an adult. The rod and reel giveaways are courtesy of 1130 AM The Tiger. Also on Sunday, one lucky fishing fan will win a Ranger Z520C with a Mercury outboard. The Ranger boat giveaway is courtesy of KSLA News 12 and is free to enter, but the winner must be present at the conclusion of Sunday’s final weigh-in to win.

Coverage of the Forrest Wood Cup will be broadcast in high-definition (HD) on NBC when “FLW” airs Sept. 29 from 2:30-3:30 p.m. ET. The Emmy-nominated “FLW” television show is hosted by Jason Harper and is broadcast to more than 564 million households worldwide, making it the most widely distributed weekly outdoors-sports television show in the world.

FLW is the industry’s premier tournament-fishing organization, providing anglers of all skill levels the opportunity to compete for millions in prize money nationwide in 2013 over the course of 220 tournaments across five tournament circuits, four of which provide an avenue to the sport’s richest payday and most coveted championship trophy – the Forrest Wood Cup. FLW tournament fishing can be seen on the Emmy-nominated “FLW” television show and is broadcast to more than 564 million households worldwide, making it the most widely distributed weekly outdoors-sports television show in the world. FLW is committed to providing a lifestyle experience that is the “Best in Fishing, On and Off the Water.” For more information about FLW visit FLWOutdoors.com<http://www.flwoutdoors.com/> and look for FLW on Twitter, Facebook, Pinterest and YouTube.