Sorry I missed writing last week, I was fishing so much I forgot, Iâ€™m sure you can relate, lol. The weather is crazy here, we are a full month ahead of where we should be right now. There are actually some beds already in the backwater areas in Erie, PA the 2nd week of Marchâ€¦WHAT?

Anyway, a couple friends and I have been putting the smack down on bass and crappies for the last five or six days, since I got home from Hartwell, SC last week. Its been fun. Macy came out one day to help break in my new Mercury 20 hp four stroke motor. She actually put the first largemouth in the new little boat. Then the following day Smiley and I went out crappie fishing and had a ball, the days just arenâ€™t long enough!

The first FLW Tour Major on Lake Hartwell went pretty well. I missed the top 10 cut by a measly 2 ounces though, which is a little hard to swallow. Somebody needs to break that Andy Morganâ€™s thumbs, lol, kidding of course, heâ€™s a dang fish-catching machine. I definitely didnâ€™t feel like my work in South Carolina was finished yet, I think winning was out of the question, but 3rd was attainable on day 4 for sure and itâ€™s a sick feeling to leave my areas prematurely like that. I was dealing with a lot of bites and about a 50% hook up ratio throughout the event as my co-anglers will concur, it was just one of those weeks. 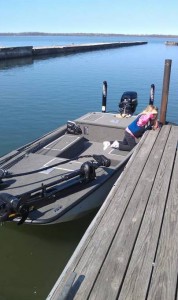 If I had it to do all over again I honestly donâ€™t think I would change a thing except maybe not talk to a cameraman when he asks me a question in mid retrieve, haha. That scenario likely cost me a five pounder on day 1. He asked if I had any good ones yet, and as I turned to answer him a big one swallowed my Phoenix Vibrating Jig. I basically set the hook like a four-year old and the fish rolled on the surface and came un-pluggedâ€¦. I was not real happy, but I immediately put my Power-Poles down and two casts later caught a 3 Â½ pounder which eased the pain slightly. The photo of that catch is on flwoutdoors.com.

I had two exceptionally wonderful co-anglers throughout the event who I would like to thank publically for their understanding of the Pro/Am format. Shannon on day 1 and Phillip on days 2 and 3, I hope I get the pleasure again sometime.

Well, we are beginning to unpack and repack for the next event on Table Rock Lake, we leave on Thursday. The family really likes going to Branson, lots to do there, cant wait! The fishing should be good too, Iâ€™m just hoping the umbrella trolling rigs donâ€™t work as well there as they have been over the last few months. Iâ€™m not going to worry about though, just fish as hard as possible with one bait at a time like it was meant to be. By the way, for those who have not yet signed the petition, you can do so here:

Thanks, you can follow me on Facebook http://www.facebook.com/DaveLefebre, and Iâ€™ll talk to you again next week right here!