Thereâ€™s a good chance that several of you have seen the show I filmed with my sons catching magnum bluegill at The Kingfisher Societyâ€™s lake near Laurel Hill, NC. What you may not have been able to see through the TV is how horribly nervous I was.

See, hereâ€™s the deal, I get nervous before every episode we shoot of Zonaâ€™s Awesome Fishing Show, but when my twin 12-year-old sons Jakob and Hunter were involved I got even more nervous. I donâ€™t care if I fail to catch fish on camera, Iâ€™m not afraid to show reality, but you donâ€™t want your 12-year-old sons to fail on camera. We were there to make memories. Good memories. 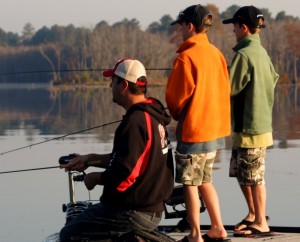 I look at the footage of that show, and I realize the best, the very best thing, my dad ever did for me was put a fishing pole in my hands. As a kid in suburbia Chicago, fishing was my friend. Whether my boys grow up to be fisherman or not, at least I know that by taking them fishing Iâ€™ve given them an opportunity to be good humans. Fishing does that.

Fishing creates better human beings, but taking your whole family on a 12-hour road trip down to North Carolina creates a lot of anxiousness. See, when Iâ€™m out there on the road as â€˜the lone wolfâ€™ (thatâ€™s my CB handle), and something mechanical happens when Iâ€™m by myself, thatâ€™s one thing, but dragging a boat 700 miles with your whole family on board is a whole new bag of anxiety.

The Z Train doesnâ€™t do wrenches. Tools are not my friends. Which is all the more reason, that on that trip, more than any other, I was darn glad I had a BoatU.S. Angler membership card in my billfold. If I have a flat tire, or smoke a trailer hub, I know I can call their toll free number, and those guys will have my back, and that calms the nerves.

As a little side bar — I hate to watch myself on TV. But, it just so happened; our whole family was over at some friendsâ€™ house when that episode aired on The Outdoor Channel, and so were a bunch of girls about the same age as my twins. You shoulda seen those girls digginâ€™ on Hunter and Jakob while that show was on. My boys can thank me in five years for that.