If you were broke down on the side of the road, Terry “Big Show” Scroggins is the guy you’d want to call. Not only did he used to be a tow truck driver, but the 5-time B.A.S.S. tournament winner is also capable of fixing just about anything, and he’s got a huge heart for lending a hand to others.

Along with Scroggins’ huge heart, capable hands, and “It’s all good” demeanor comes a tongue full of verbal quips dripping in southern drawl — delivering relentless perspective to make all of those within earshot smile.

After a Top 12 finish at the 2011 Elite Series opener at the Harris Chain of Lakes, Scroggins now returns home to his backyard waters of the St. Johns River. All eyes will be upon him, but perhaps we’d be wise to listen as well as watch. The following quotes provide a sample of what you might hear from Scroggins on various subjects ranging from birds to baitcasting reels. 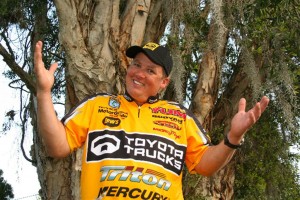 Blue Herons – “I call those birds George. I stole that from my buddy Charlie Flowers. He’s an old timer that doesn’t believe in sonar or GPS. He follows nature’s signs. And every time he sees a Blue Heron he says ‘there’s ole George, he knows where the baitfish and bass are.’”

Speaking of following nature’s signs – “A gar rolling on the surface a long way from the shoreline is usually over top of a major form of bass holding structure.”

Most call it a Carolina Rig – “Gerald Swindle and I call it the ‘double splash rig.’”

On diet – “If everything you eat contains at least half as many proteins as carbs, you’ll be in good shape. At least that’s what the lady at the gym told me.”

When he was struggling to find a fish-catching pattern – “I’m as lost as last year’s Easter eggs.”

Old School Skirts – “You can’t hardly find living rubber skirts on a spinnerbait or jig anymore, but when I can find them I like to add them to a Booyah spinnerbait for fishing in dirty water. Living rubber has a lot of action, my favorite color is blue and yellow.”

Before he secured a reel sponsor – “By looking at all the different brands of reels I’ve got, you’d think I’d been to the flea market.”