There’s a lot of bluffing going on at Bull Shoals. The somewhat misleading poker game of mental jousting between Bassmaster Elite Series pros is part of the competitive dance. But bluffing at the history rich, 62-year-old reservoir on the Arkansas-Missouri border also comes in the physical form of countless steep rising rocky shorelines referred to as “bluffs” or “bluff walls.”

“Anytime you’re struggling to find fish or get a bite, you need to try fishing bluffs,” says Team Toyota’s Terry “Big Show” Scroggins. “Bluffs hold fish twelve months a year, and there aren’t many pieces of bass habitat you can say that about.”

“The thing you have to realize about bluffs is that there are several different components to each wall, including the bluff ends or points, river or creek bends along them, small pockets, and also shelves,” explains Scroggins. “Plus, bass can move up and down vertically all day long if they choose, so your job is to figure out what part of the bluff they’re located on, and equally as importantly, at what depth. But there’s a good chance they’re living on some portion of it.”

Scroggins’ roommate Gerald Swindle was quick to cite a tough lesson learned in the specific location of bass along a bluff from the 2009 Bassmaster Elite Series event on Lake Wheeler. “Casey Ashley finished 2nd in that tournament by fishing the one single 300-yard stretch of bluff wall that I failed to check,” lamented Swindle. 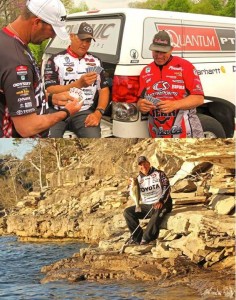 Ironically, Ashley’s top finish in ’09 at Wheeler, is also the one Britt Myers credits for leading him to a 2nd place finish of his own at the Bull Shoals Elite in 2012. “When Casey talked about catching them off bluffs at Wheeler four years ago, it got my attention. Heck, I was tired of getting my butt kicked by guys fishing bluffs,” said the personable pro and owner of CS Motorsports. “So when we came to Bull Shoals last year, I focused on bluffs, and found the bass were about 5 to 12 feet deep, which was right in the zone of one of my favorite crankbaits – the Rapala DT 10,” said Myers.

While Myers loves to crank, Scroggins takes more of a finesse approach to bluffs. “I’d say 90-percent of the time I’m either gonna throw a Shaky Head or a Shaky Head on a bluff wall,” grinned the Florida pro. Scroggins throws his Shaky Head worms on a 3/16-ounce head tied to 6-pound fluorocarbon line.

Much like Myers dialed into the fact that Bull Shoals’ bass were hanging at depths of 5 to 12 feet during last year’s competition on Bull Shoals, Scroggins says it’s critical to be a line watcher in order to figure out what depth is most magical on the vertical walls. “When you cast the Shaky Head out, it’s key to let it fall vertically, and also pay really close attention to where that line jumps, or just barely ticks, when they bite it. Watch your line, he’ll tell you whether he’s 5-feet deep, or 20-feet deep,” says Scroggins. “A lot of times, bluffs have a shelf beneath the surface, and that’s where the bass will be hanging.”

While Scroggins is loyal to the Shaky Head, and Myers loves to crank, Swindle mixes it up, and offers a seasonal selection of lures to try on bluffs. Spring finds Swindle cranking or throwing a jerkbait. But as waters warm in summer, he follows Scroggins’ lead and moves to a Shaky Head. Autumn finds “The GMan” tossing a topwater or burning a spinnerbait along the rock walls, and in winter, he chooses a 3/8-ounce jig with a bulky trailer, fished on 14-16 pound fluorocarbon.

“Bottom line is – bluffs hold fish year round. And when you find yourself in a conundrum … you better lean on the rock,” concluded Swindle, laughing that he was certain “conundrum” started with the letter C, and not a K.