Bassmaster Elite Series Rookie of the Year, Jacob Powroznik is built like a powerful nose tackle, but after fast realizing St. Lawrence smallmouth perform more like upward blazing wide receivers, he placed an urgent call to Quantum for a shipment of faster spinning reels.

“It seems like everybody talks about the gear ratios of a baitcast reel, but for some reason the gear ratio of a spinning reel gets overlooked,” said Powroznik, proudly holding his fresh shipment of faster reels after Day Two of practice for the Evan Williams Bourbon Bassmaster Elite in Waddington, NY.

“When you hook these smallies in 30’ of water, they scream straight toward the surface, and with the slower 5.2:1 reel, I couldn’t keep the line tight, and lost four fish yesterday in practice,” explained Powroznik. “The faster 6.2:1 Smoke Speed Freak should help me keep the line tighter and lose fewer fish when they start to skyrocket – it picks up 33” of line with every turn of the handle.”

Powroznik also says it’s important to pick-up line as fast as possible when patterns involve vertical presentations like a drop shot. “Most of the time you’re watching that sonar screen, and all the sudden you’ll see the whole kit and caboodle appear, but your lure is a few feet off target– if you can’t pick up line as fast as possible and drop it back on their nose – you risk missing that school of fish,” adds Powrzonik. 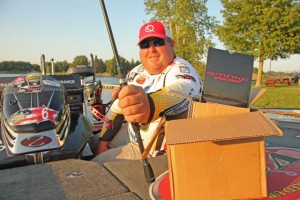 The Virginia pro ordered size 25 reels because their spool is plenty large enough to hold all the braid he could possibly need. “I’m using 8-pound braid tied to a 6-pound Hi Seas fluorocarbon leader, and that 25 size reel will hold more than enough line, and yet still fits perfectly in your hands.”

Given Powroznik’s in-depth understanding of the advantage offered by faster gear ratios, and his attention to every detail, right down to inches of line retrieved per turn of the handle, perhaps comparisons to that of a Crew Chief in his beloved NASCAR would be even better suited than that of a nose tackle.