The 2012 Bassmaster Elite Series season kicks off this week in Terry â€œBig Showâ€ Scrogginsâ€™ hometown of Palatka, Florida. And while his home-field advantage is obvious, so is his heart for making sure everybody has a good time, and nobody walks away hungry.

â€œThis is the one week each year that I get to take care of all the people that take care of me,â€ said Scroggins, as he stood in his garage, surrounded by fellow pros. A moment later, mechanics from the B.A.S.S. on-site service crew that are allegiantly there when Scroggins has an issue on tour strolled up his drive-way for a chance to chow and fellowship.

Scroggins may be the profoundly top pick in everybodyâ€™s fantasy fishing league this week, and heâ€™s also a very popular host for his fellow competitors. Scroggins loves to eat. He loves to grill on his Big Green Egg. And mostly â€“ he loves to feed people. So Tuesday night, his kitchen looked like a Bassmaster Elite Series blast-off harbor without boats, as a long list of well-known pros filled their plates from a 45-pound pile of Boston Butt. 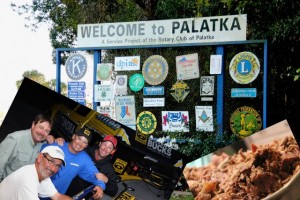 For those of you who arenâ€™t butchers, or residents of the heart of the SEC Conference, donâ€™t be alarmed. A Boston butt isnâ€™t really a butt. Itâ€™s a shoulder. Cut from a pigâ€™s upper shoulder and smoked BBQ style to a point of tenderness that seemed to melt in the mouths of guys like Quantum pros Shaw Grigsby, Casey Ashley, Gerald Swindle and Kevin VanDam last evening after a long practice day on the water.

â€œIs that stuff not incredible?â€ asked Grigsby, eyes wide in amazement, and mouth full of pig shoulder. Grigsby was the first pro to arrive at the feast, along with his roommate Paul Elias, followed by KVD, Skeet Reese, Scott Rook, Casey Ashley, Kelly Jordon, Boyd Duckett, Davy Hite, Bernie Schultz, Britt Myers, Gerald Swindle and Jason Williamson. Even popular writer Don â€œdbâ€ Barone was there, and was later credited for the funniest quote of the night when he asked, â€œ45 pounds of Boston Butt â€¦ is there any left in Boston?â€

Indeed there was plenty, and you can blame the meaty abundance on Scrogginsâ€™ long time local fishing opponent, and good buddy Dale Cohen and his family. Cohen works for Florida Power & Light, and like Scroggins, loves to fish, grill and feed people. So while â€œBig Showâ€ was busy on the water practicing yesterday, Dale stepped in as good friends do and made sure dinner got cooked.

Cohenâ€™s willingness to cook 45-pounds of pork, and haul it into Scrogginsâ€™ kitchen is a great testament to the character of both men. Cohen could easily be envious of Scrogginsâ€™ success, but heâ€™s not. Instead, like a lot of folks in Palatka, heâ€™s just proud to call â€œBig Showâ€ a true friend. Tuesday night, the proof of â€œBig Showâ€™sâ€ big heart was in the pork. All 45 pounds of it.