More than sixty years ago, a Texas watchmaker named R.D. Hull watched packaging string flow tangle free from a spool at a local supermarket and thought it might make a good idea for a fishing reel.

Gary Klein will graciously carry, and possibly compete, with a Zebco 33 at the Bassmaster Classic in honor of Mr. Hull’s life-shaping invention.

To sentimental types, Klein’s decision to carry a Zebco 33 in his boat is an admirable act. To serious fisherman, the idea of competing with a $29 spincast reel for a Bassmaster Classic title, that has seemingly unfairly eluded Klein in 29 previous attempts, may seem crazy.

“I think it’s important to remind everybody that freshwater fishing’s most basic roots are hugely tied to one reel. I know mine are,” said an appreciative Klein.

“The Zebco 33 was born in 1954, and I was born in 1957. If I wasn’t walking the shoreline of Lake Oroville as a kid, then I was at the family cabin on Lake Almanor using marshmallows and salmon eggs under a bobber to reel in trout with a “33”,” the northern California native fondly remembers. 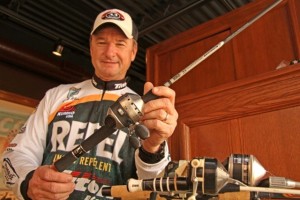 “My dad was a fireman, and if he was busy fighting a forest fire then mom would take my two younger brothers and myself fishing,” said Klein. “Maybe she just thought it was easier to take care of us if we were fishing, but I can tell you for sure that pretty much every weekend of my childhood was spent hiking, fishing or camping, and a Zebco 33 was part of every trip,” he fondly remembers.

But again, setting aside warm and fuzzy memories, is Klein really sure he wants to chase his first Classic championship with a reel made mostly for beginning anglers?

“At a minimum, yes, I hope to make a few casts with it during Classic competition,” says Klein. “I’m serious enough about using it during the Classic that I won’t do it cold turkey, so I’ve already been practicing with it,” he explains.

“In fact, I put the 60th Anniversary model “33” on a 7’ medium action Quantum Smoke rod, with a ¼ oz. red crankbait tied to it, and made several casts while practicing for the Bassmaster Open on Lake Amistad,” says Klein.

Klein says that like a free flowing packaging string in a grocery store, castability is not a concern. But being the consummate technician, he worries a bit about speedy line pick-up. The 19.1 inches per turn of the handle in the brand new 60th Anniversary Zebco 33 should help alleviate some of that apprehension.

“There’d be nothing more gratifying than weighing-in a fish at the Bassmaster Classic that I caught on a Zebco 33,” says the always classy Klein.  Other than winning the Classic title on his 30th attempt, of course.