Rewind
The Red River had long been a hotbed for Bassmaster competition, since 2000, several Bassmaster Invitationals and Opens had come to the Shreveport / Bossier City area, but in that time, only one tour event had been on the waters of the Red River.

While many of those events had been in the postspawn through early fall, and had been largely tough fishing events, this one was slated to be different.  Many of the experts and anglers predicted that heavy weights would be the order of the day, even with the expected cold temperatures.

Two factors that anglers were discussing openly were the decision to make long runs through locks, and the potential for the River to be crowded as anglers would be seeking concentrations of fish, and many expected a lot of company.  Talk amongst the competitors and the pundits was that the event would be dominated by backwaters.  With the bass wanting to enter into their spawn, they would most likely be expected to be migrating into the backwaters.

“I made a conscious decision to stay in Pool 5 and put myself in the area that had the highest possible potential for me winning the tournament,” Reese said. “That lake back there, every local knows about it. I read a little about it online, something about Caspiana Lake, and you look on a map and it’s one of the best looking lakes in Pool 5.”

The Winning Pattern
His plan was to sit in the mouth of Caspiana and intercept bass that were backing out of the lake to escape the heavy pressure inside the lake.  His selection looked to be a wise one as several high finishers on day one came from Caspiana, including leader Boyd Duckett and Aaron Martens who finished the day in fourth place.

Reese would utilize two lures throughout the event.  One was a 1/2-ounce Redemption Lures spinnerbait that he modify by adding a white skirt, and the second was a new from Berkley, the 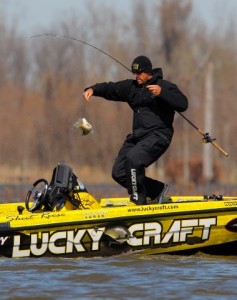 PowerBait Crazy Legs Chigger Craw, in Black with Blue Flake.  The would slow roll the spinnerbait early around stumps and laydowns, then Flip the same areas as the sun would get higher in the sky.

He targeted dirty water mostly because he felt that it provided him the most stability in the changing weather conditions. “My bigger fish came out of the muddy water,” Reese said. “Anytime we fish high-pressure, post-front conditions, clear-water fish are the hardest to catch. They’re moving up there to spawn, but when it gets cold like that, they pull back out and into ditches. If you have fish in dirty water, those fish are going to be easier to catch. The fish felt more comfortable staying shallow where the water temperature stayed warmer.”

Day One
Reese would post 15 pounds 8 ounces on the first day of the 2009 Bassmaster Classic.  His weight would put him in 13th place, nearly five pounds behind Duckett’s 20-pound, 3-ounce leading weight.  While it might seem disappointing to be so many places behind on the first day, his plan was to just try to put himself in position to not fall out of contention.

Day Two
This was the day that Reese would make his big move.  Not only would his fishing pressure strategy begin to take shape, but he would also make a slight adjustment to fish within his area, he found a better class of fish.  he would say in interviews after the second day.  “I had a game plan and it somewhat paid off a little bit better than I anticipated today. What’s going to happen tomorrow with this cold front is a whole other story,” Reese said. “I made an adjustment in some water and actually fished where I was supposed to be fishing, the really pretty water where the bass really were. I caught them and thought, well, why didn’t I fish here yesterday?”

He managed to catch one of the biggest limits of the entire tournament on day two.  His 22-pound, 9-ounce creel would help him leap to second place when many of the leaders would stumble.  His 38 pounds, 1-ounce total would find him eight ounces behind day two leader Jami Fralick, who posted consecutive 19 pound limits.

Day Three
Day three of the 2009 Classic would provide fireworks.  An overnight cold front would once again create necessary adjustments for the anglers.  Some would make the right adjustments, and others would not.  While the day two leader Fralick would completely stumble and fall to eight place in the standings with a ten-pound day, Reese would have a solid day despite only getting a few bites.

While Reese was scraping together his limit, 2003 Classic Champion Mike Iaconelli was putting on a show in pool 6.  Iaconelli would catch 20 pounds, 3 ounces and take over the lead with 54 pounds, 2 ounces prior to the Super Six being introduced.  Reese was the second to last angler to weigh, and when his 16 pounds, 12 ounces pushed total to 54 pounds, 13 ounces, he took the lead with only Fralick left to weigh.

Fralick’s small limit fell far short, and Reese was able to celebrate in earnest his first Bassmaster Classic victory, the fourth Bassmaster win in his career. 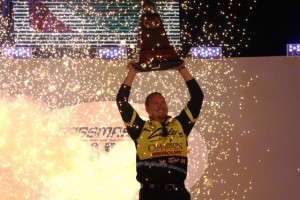 Wrap Up
The win would make Reese only the 12th angler to have won both the Bassmaster Angler of the Year and Bassmaster Classic titles in their career.  He would go on to make the tour of ESPN programming known as “The Car Wash.”  He would spend the day at the network’s Bristol, Conn. headquarters being interviewed by their radio and television personalities.

Reese would not let the distraction of the Bassmaster Classic win deter him from excellence throughout the Elite Series season.  He would go on to be the highest finisher in the season long points race, but would not win the Angler of the Year title because of a new Postseason format designed by B.A.S.S. officials to provide additional television coverage after they shortened the season to eight events in a down economy.

He would continue his hot streak into the 2010 season where he would win two more Elite events and lead the points race at the end of the season again.