Last time I told you that I would give you a report about the WON Bass team tournament I was fishing over the weekend on Lake Havasu.

I got beat. Well we all did.

My Evergreen teammate Shaun Bailey really whacked ‘em. Shaun and his team partner caught almost 25 pounds and beat us all pretty good. Me and John, my team partner, had almost 16 pounds and I finished fifth. Shaun’s been on a tear lately and really catching them good out here, so we’ve got our work cut out for us.

We’ve got a National Bass West event this weekend, and I’ve been putting in a little more time on the water trying to refine my pattern. Today was the only day this week that I didn’t go out there; I’ve got some stuff to do around the house, so I stayed home, and will start practicing tomorrow. 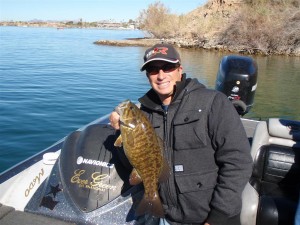 We’ve been catching on a crankbait, which is always a lot of fun. I believe Havasu is one of the top 10 lakes in the country, I wish more big pro level tournaments would come here. It takes a bit to figure out the bite, but once you do, it can be awesome.

I know one thing that would help is having my new boat with the Humminbird Side Imaging. I’ve never put big money into the latest electronics on my boat, but Aaron Martens showed me his set up, and I realized I was at a huge disadvantage. So my new Ranger will have an 1198 on the dash and a 998 on the bow; now I won’t be in the dark so much.

My parents were here at the house with our friend Dick from Tennessee. I stay at his house a lot while I’m traveling east, and he thought he’s take a look at our setup out here. Dick’s like 70 years old and hadn’t been out here before, so it was cool to take him on the lake and help him catch some of our smallmouth, and see London Bridge. We caught a bunch, with all of them being in the three and a half to four pound range; it was a lot of fun. 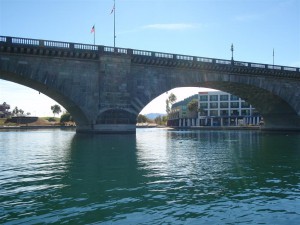 Anyway, I’ll be back in fish mode tomorrow, and I’ll give you a report from tournament next week; hopefully with a better result.