John Murray – All In: Getting Ready

I’m sitting here in the garage, working on tackle and thinking about the season ahead, and I’m really excited about it. 2011 is going to be a busy year for me; I’ve got a lot of tournaments on the calendar. I’m fishing the Bassmaster Elite Series, the Bassmaster Northern Opens, a few Everstart Series events and some of the PAA Series.

Being busy is good for me, I think back to 2007 when we had 11 Elite Series events, the Classic and four majors, I really didn’t have time to think about anything other than fishing. That schedule kept me on my toes, and it helped me stay focused on the days ahead, and this year should be a similar type of year.

While I’m fired up about the fishing, I’m even more excited about it because my wife Amy and son T.J. are going to be coming on tour with me. Last season was hard for me because I felt like I was missing so much of T.J. as he grew up. I was on the road for his first birthday, and so many other milestones that it became distracting for me. 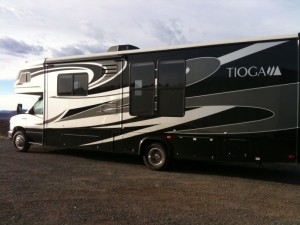 Amy and I decided that now is the time for us to do this together, so we bought a 32-foot Tioga Class C motor home and are in the process of deciding what stuff has to go in to the RV from the house. I’m really excited that they are coming with me this year because I’ll have my family with me on the road; it’s something Amy and I started talking about two years ago.

I’ve had some friends ask me what we’ve named the house on wheels and the one that seems to stick is All In! Really, that is the best description of what this year is, because that’s what the vehicle represents for both of us. Amy has given notice at her job, and I’ve decided to focus totally on providing for them as a professional angler; so we’re both all in.

Not that I’m a fan of cards, I play occasionally, but that’s the best way to describe it. I’ll be going out first with the boat and truck, then flying back home so that we can all drive out together, and we’ll be like the other nomads on tour who camp.

It’s a little nerve wracking for us because neither one of us has ever been campers, so it will take a little while for us to get accustomed to it. We’re going to go out a few times around home and take some dry runs at it so we can get used to the camping procedures.

We’ve talked to some of the other families who camp, and Kevin and Kerry Short have been really helpful with information about campgrounds and other resources. All I can say is that I’m totally locked in and looking forward to getting started, my goal will be to make the Classic, and I feel good about where things are going.