I’m in Florida getting ready for the first event of the 2012 Bassmaster Elite Series season at The St. John’s River. But, I didn’t start by heading straight to the event area.

The Phillies made me my own jersey with my name and the number 36 on it. I got dressed in a Phillies uniform and spent a day on the field.

There was a debate going on between me and Doc Halladay as to whether I could hit a pitch off of him. First of all, I have to say that I actually hit a ball off of him, but it didn’t happen exactly as it should have.

They put a batting helmet on me, gave me a bat and put me in the batter’s box and Roy started throwing. It didn’t take me long to actually connect with a pitch off of Roy. I was pretty proud – until all hell broke loose.

When I hit the ball it hit one of their pitchers; Phillippe Aumont, in the forearm. Everyone scrambled and started running around to make sure that he wasn’t injured. It turned out to be a welt on his forearm.

I figured out why they scrambled around. How was I supposed to know I wasn’t supposed to hit a ball in the bullpen?

I was standing there in the batter’s box watching Doc throw pitch after pitch, when it occurred to me that I was missing my opportunity, so I swung and fouled a pitch off. The pitching coach wasn’t happy with me, but most of the team was laughing at me.

The whole thing is on video, and the players kept playing it over and over again and laughing every time they played it. I’m trying to get a hold of the video for Advanced Angler.

After the practice and watching a game from the bench, I went fishing with Roy on his community lake at his house. We caught several fish, and I taught him how to swim a Berkley Havoc Pit Boss. He caught an eight pounder on it the next day. 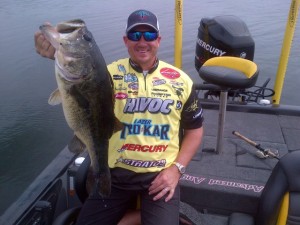 After that, I got in the TroKar / Havoc Big Rig and went to Bienville Plantation for a day on the water there. We slid the boat in the water and I caught an 11-8 on my third cast with a custom poured Rago Baits SKT Swimmer. I caught an eight pounder and several others up to five pounds.

I spent Saturday getting my tackle together and we had our rules meeting on Sunday and we start practicing tomorrow. I’m ready to get the season underway. I’ll talk to you next week.