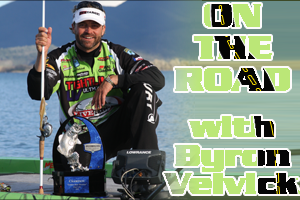 I’ve had several concerned emails through byronvelvick.com concerned fans of the sport as to why my name wasn’t on the 2001 Elite Series roster.

I guess it’s best to start at the beginning.

I’ve been struggling with numbness and tingling in my arms and hands for quite a while. What started off as noticing my hand going to sleep when I held a phone or a spinning rod a couple of years ago became a pretty sharp pain in between my shoulder blade area. After that came up, I’ve not felt my hands since.

When I was at the Classic in Birmingham last year, the pain got so bad that I had to go to a specialist; They gave me some medications and I tried to go about my business. That business wasn’t very effective. Even at last year’s Golden State Shootout at Clear Lake, which I won, you can see me shaking my arms out trying to get feeling into my hands. 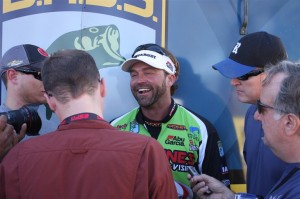 There were a few times I even stuck hooks in my right hand fingers on tour last year and couldn’t feel it even though I could see blood droplets. It was like my hand wasn’t attached to me, like looking at someone else’s hand.

By the time I fished the U.S. Open after ICAST, I finally decided to have it looked at, my fiancée Belinda took me to a neurologist. What the neurologist told me was that I had severely pinched nerves in my cervical area of my spine. The injury was causing not only loss of sensation in my arms, but my right hand had actually atrophied, and had become smaller than my left hand.

After much nervous consideration and deliberation, I decided that surgery was the only route. After talking to friends in the medical field, they suggested I go to the best neurosurgeon they knew to perform surgery; after all we were talking about my spine. I chose Dr. William Smith at the Western Regional Spine and Brain Institute in Las Vegas, Nev. and started making plans.

Dr. Smith told me that he expected everything to go very well, that I had a 98-percent chance of everything going perfectly, and I would be back to almost new in a six to eight months. But looming very large in my mind was the remaining two percent.

He told me that there was a very small chance I could end up paralyzed or even die as a result of the operation. Belinda and I considered the options and decided to go forward with getting my affairs in order. Not wanting to worry anyone, I told nobody about the surgery, and only told my parents five days before the surgery; which was performed in late October.

They installed a titanium plate with six titanium screws in my spine and two plastic disks to replace the deteriorated cartilage. After surgery, I was made to wear a hard neck brace with no driving allowed. I transitioned to a soft collar around the Holidays have began my Physical Therapy after the first of the year.

I’ve been in touch with Trip Weldon at B.A.S.S. the whole time, and the result is that I’m currently on the injured reserve list. My doctor is hopeful that I should be fine by June, but he’s concerned that I could injure myself with repetitive casting, and hard boat driving in competition before then.

I’m basically been playing it by ear, going through physical therapy trying to build everything back to as close to new as possible, then I’ll make my decision. I’m 70 to 80-percent sure I’m going to be sitting out the Elite Series season in 2011 on a medical exemption, and plan on competing again in 2012.

My sponsors are behind me, and have been very supportive. I’ve got my boat on order with Triton, Mercury / Motorguide have my motors ready. I’ve talked to Boyd and Sean at Duckett Fishing, and Tammy Cox and everyone at Abu Garcia and Berkley Trilene, and have been working with Bret over at Tightlines UV Tackle to help educate people further about his baits during my rehab. Terri and Amanda over at Costa Del Mar have always been good to me and Kat, Tony and Dennis at Owner Hooks are always on my side and Jerry Rago still riding me to throw swimbaits at every tournament, LOL.

For now, I’m just trying to get healthy, and I’ll share it all with you right here on my road – to recovery.