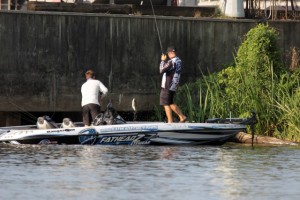 To say that Jacob Wheeler has taken the bass fishing world by storm could be an understatement.  After winning the 2011 BFL All American, then the 2012 Forrest Wood Cup, Wheeler followed up his crowning achievements by qualifying for the Forrest Wood Cup on the Red River through the points again; despite the fact that he was already qualified by virtue of his win in 2012.

While avoiding the dreaded sophomore slump, Wheeler continued to establish himself as not only an angler who could win the big event, but also a versatile angler who could adapt enough to catch them just about anywhere.  He also showed that he is not an angler who likes to sit back and rest on past laurels; he appears to be one to want to climb the peak every chance he gets.

His pre event planning led him to prepare a strategy based on maximizing his time in areas that he thought would produce the kind of bites that would win the tournament.  He set up his practice by committing to one area of the tournament waters, choosing to maximize fishing time, instead of running around trying to cover everything.

Wheeler said that his plan was to scour every inch of pool 5.  “My research showed me that the winner would most likely come from pool 5,” he said.  “So, I decided to focus my efforts on the main pool and try to find the best hours to hit the best parts of the lake each day.”

With that in mind, Wheeler spent his pre-practice looking to find what he felt were the best areas to target for the official practice days prior to the event.

Having scouted the areas, he decided to spend the first hours in the morning scouting the premium backwaters in the high heat to find out what are held the best morning bite.  “With heat indexes over 105, you only have so much time to get that good morning bite,” he said.  “I covered as much of them in the first bit of tie in the morning as I could, figuring that the bite in those backwaters would be key during that stretch.”

He used the mornings to scour areas like Do Not Dredge Lake, White House, and some of the deeper waters around Little Ninock, he spent his afternoons probing the river itself looking for something that he could use to fill in some quality fish to his daily limit.

His search led him to feel comfortable with the area around the Port Lake; which is where the daily takeoffs would occur at Red River South Marina.  “The Port Lake is a great area, but it’s also a community area,” said Wheeler.  “Dion Hibdon used it heavily in winning his Cup, but it is a great area because so many tournaments go out of there that the fish populations constantly refresh.”

On the final day of practice he returned to the backwaters and sought to refine his approach more.  He felt like he had dialed in what he would do in Do Not Dredge Lake, White House 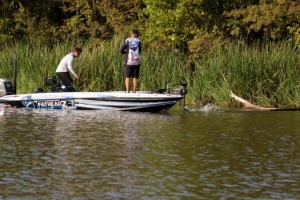 and small backwater that he never learned the name of.  “I actually bent four props getting in there,” he said.  “But, I actually ended up catching half of my fish during the event in that

Day One
The first morning of the event came a day after a storm front had moved through the Shreveport / Bossier City area.  Many of the anglers remarked how the morning air was cooler than they had experienced during their practice periods.

Wheeler reported that he was the fifth boat out on the first morning, so, he went to Do Not Dredge Lake, hoping to get one or two of the four to five pound bites he received there in practice.  “Something was wrong,” he said.  “I had quite a few fish roll on my topwater baits, but they didn’t commit all the way; the weather front seemed to have an effect on them.”

Instead of hopelessly flailing away with his topwaters, he switched up to a spinning rod and a wacky rigged Trigger X Flutter Worm, which he tossed into holes in the pads.  He manage to pull together a small limit, then proceeded to cull up by ounces with the approach.  He knew he had to make an adjustment, so he headed to the river, picked up a Rapala DT6 and a Flippin’ Rod with a Trigger X Goo Bug looking to make an improvement; to no avail.

At 1:00PM, he went to his no name backwater, and found a couple of boats in there, so he headed back to Do Not Dredge and managed to catch a 1-pound, 3-ounce bass that culled him up to 7 pounds, 4 ounces; only enough for 40th place in the standings. 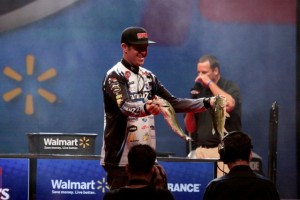 With the morning temperatures still low on the second day of the event, Wheeler decided it was time to reverse his course.  Instead of heading into the backwaters and fighting the tough topwater bite on the colder morning; he went to the main river bite first.  “I began by hitting all of the reeds I could find on the main river,” he said.  “I had a nine-pound limit by 9:00, and started thinking about how to upgrade.”

He decided to hit his small, no name backwater and give it a chance to produce some of the bigger bites he had seen from it in practice.  After fishing through most of it, he had yet to see a bite.  He got to the back of it and saw some openings in the pads.  He began tossing the frog to those openings, and he began getting movement from the bass.  He caught several on the frog, but also caught some on the Flutter Worm and Goo Bug as follow up baits.

“I stayed there the rest of the day and caught several good ones,” he said.  “I left there feeling pretty good about my chances to at least make the top 20 cut.”  He was right.  He was able to move up to 17th place with a 13-pound, 7-ounce limit to bring his two day total to 20 pounds, 12 ounces.

The weather conditions were colder still on the third morning of the event.  However, even with the colder temperatures, Wheller though that he would give the fish in the backwaters a

chance.  After a 10 minute idle to the back, and five casts, he told his observer that it wasn’t right.  So, he took himself back to the river and headed to the Port Lake.

There, he managed to catch a bass pushing two and a half pounds and another keeper.  He revisited some of the main river reed banks that had produced the day before to no avail.  At 9:30, with only two fish in his livewell, he headed back into his small nameless backwater.  He quickly caught a three pounder, but at 12:30, that was the only bite he’d had in there; so he returned to Do Not Dredge Lake.

He caught two quick keepers to bring his total to around nine pounds, then he started hearing bluegill popping at bugs around the pads.  He picked up the frog, caught a second three pounder and a 1-pound, 10-ounce fish that culled a smaller keeper.  Then, he returned to the small backwater with an hour and a half to fish.

After fishing three quarters of the backwater, he had yet to produce a fish.  Then, he saw some movement by a pad in the back of the area, he tossed the frog to the pad, and caught a 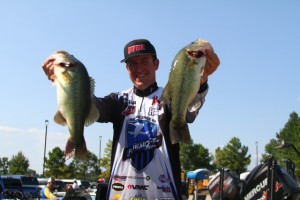 4-pound, 3-ounce kicker.  He returned to the weigh-in with 14 pounds, 4 ounces and moved his weight to 34 pounds, 15 ounces and climbed to fourth place.

Day Four
He exited the cabin at Red River South Marina on the final morning and said he immediately noticed the difference.  “The air was warmer on the final morning,” he said.  “I really felt like I could go catch some in the backwaters early, but felt like I’d really caught most everything in my small backwater.”  He decided to head to Do Not Dredge Lake and throw a buzzbait

while he watched the pads for signs of life.

When he reached the back, he had not had a bite.  However, he said things felt right for a frog when he got to the back and a little channel that he had caught a couple of decent sized bass

in practice.  He had a blowup on the frog, but missed a fish that was almost three pounds.  Knowing that he was moving too quickly, he put his Power Poles down and started targeting things more thoroughly.

At 8:30, he saw a fish swirl under some pads, so he knelt down to keep from spooking it.  The fish struck, and he boated a 4-pound, 3-ounce bass.  He saw some movement out of the corner of his eye on another set of pads and threw the frog.  He got no response, so he switched to the Flutter Worm, and caught a two pounder.  Then, he caught another 3-pound, 12-ounce keeper on the frog, and he was on his way to a good day.

He managed to fill his limit before returning to the small backwater, but was only able to upgrade his limit by ounces before time ran out on the final day.  he came to the scales with 14 pounds, 3 ounces and finished in the runner up position; four pounds behind champion Randall Tharp with 49 pounds, 2 ounces. 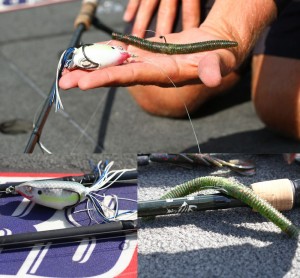 Turning Point
Wheeler said the first day was his turning point.  “I really didn’t give myself a chance with the way that I did things on the first day,” he said.  “I put myself in a huge hole, but was really happy with what I was able to do in the event with a bad first day.

“I was proud of myself for not just settling for the check,” he said.  “I really worked hard to improve myself, and to make better decisions.  I did a lot in the event when you consider where I started out.”

Equipment
While he did catch a few fish on the Goo Bug, the frog and flutter worm were his primary weapons in the 2013 Forrest Wood Cup.

His frog was a SPRO Bronzeye Frog in the Nasty Shad color pattern.  He threw that on a 7’2″ Shimano Cumara rod and a Shimano Core 100 MG reel with 7.0:1 retrieve speed and 65-pound-test Sufix 832 braided line.