Adding a Day to Me 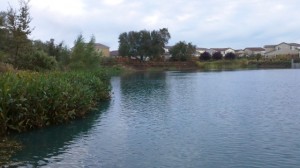 They say that every hour we spend fishing adds another hour onto the end of our lives. I don’t know who “they” are, but I suppose that I’ll have to take them at their word.

I wonder what “they” would say about those of us who write about fishing for a living? Would those activities add, or subtract from the end of our lives? I guess that kind of depends on the person.

I started doing that today.

I called my dad earlier this week and suggested that we go try this pond that’s in a housing development that a friend of his just moved into. That was on Tuesday, and mainly because I didn’t want to sit here at home and watch the election results come in. But, Dad was busy teaching a class at church, so we couldn’t make it work. 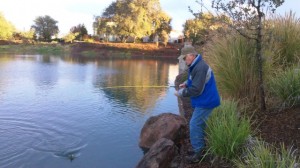 So, I called him again today and said, “you ready today?” Much to my delight, he was.

Then, it started raining.

My dad is the kind of angler who believes tournaments should run on banker’s hours. Takeoff begins at 9:00AM after a nice breakfast buffet, there would be a lunch break from noon to 1:00, a nap from 2:00 to 2:30, and weigh-in would happen at 5:00, followed by a stop for dinner on the way home. Then, a pit stop for a milkshake night be in order after that. Believe it or not, my dad and a friend of his actually won a club tournament on the California Delta in much that fashion.

All of that to say that, my dad is a fair weather angler, and today’s rain almost stopped my side door escape. That was not going to happen, and with some help from the radar page of accuweather.com showing that the rain was going to be gone by the time we got there, we decided to go for a couple of hours this afternoon.

We got there around 3:00 after stopping at his house to change clothes and get his gear. I brought only four rods rigged with a swim jig, a Flippin’ jig a spinnerbait and a River2Sea Whopper Plopper as a topwater bait. I was convinced that nobody in this pond had ever thrown anything remotely like these lures and I was going to give myself a serious case of happy thumb with them.

Dad brought three rods, two of them spinning rods with his famous darter head and “MarkO Worm,” as he calls it which is a little hook tail grub in Original Weenie color and a Trick Stick from Big Bite Baits on the other. He brought along a medium action casting rod for crankbaits and jerkbaits and a small Plano tackle bag with enough stuff to keep him busy tying on for the afternoon. 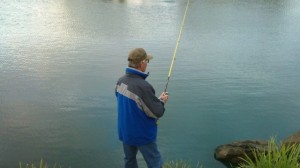 I spent the better part of two hours churning most of the little lake to a froth with my high tech arsenal with no response. All I had to show for it was some pond weeds on hooks and some mud on my shoes. Dejectedly, yet somewhat more freely breathing than I was at 1:00 this afternoon, I decided to wander around the lake to see what Dad was doing, and get ready to go.

As I neared him he asked if I’d seen the fish he caught. No, I hadn’t so that meant he had not caught one, because I of course, could not verify the existence of said bass. I saw that he was tossing his Trick Stick on the spinning rod, so I quickly commandeered his other spinning rod and caught a small bass myself. Dad caught another little one and with the approaching darkness, we cleaned off our shoes in the grass and began to head towards home.

Today reminded me of when we first got into bass fishing together. While I was a baseball player in college; before marriage and family for me, while I was home on summer breaks, we fished many afternoons together. Dad would get home from a day at his work as a Law Enforcement Chaplain and we would hook up his Bass Tracker and head to Folsom Lake to catch the topwater bite in the evening.

There were many weekday evening outings that would end with us calling my mom to bring a camera to take pictures of the three pounders that we had caught on a Tiny Torpedo or Rico after I’d discovered that high dollar Japanese popper.
Those evenings would usually end with Mom, my sister Erin and Dad and myself heading over to Carl’s Jr. for dinner before we headed for home. I’m not sure about you, but I think that’s the kind of moments that recreational fishing was invented for. 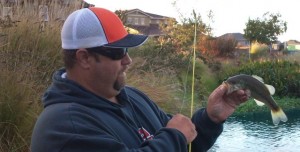 Today felt similar to those days, although there was no stop at Carl’s Jr., but I did come home to my family, which includes my sister and some sort of dinner getting ready to be consumed before what hopefully will be a relaxing evening at home.

All I know is this, the relaxation started around 3:00 this afternoon, with the first line hitting the water.

I need to do this more.