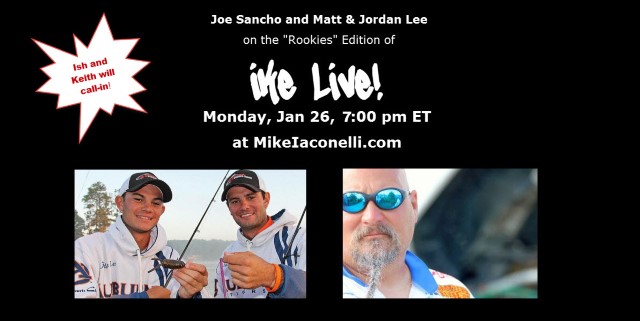 In addition, Ish Monroe and Keith Poche are slated to call-in to talk about their recent altercation. The two came boat-to-boat and face-to-face at the start of the Southern Open at Lake Toho, Fla. They both landed in the water and on the front pages of the bass fishing websites. They will give their perspectives and reflections.

Note that the start time for the show is moved to 7:00 pm ET to provide time for all the guests.

Sancho completed his rookie year on the Bass Elite Pro circuit in August, after some 20 years of weekend tournament fishing—the first eleven years as a non-boater. A New York City electrician whose employer supported his 2014 Elite Series fishing schedule, Sancho is quickly learning the rigors of professional fishing.

Brothers Matt and Jordan Lee start their rookie years on the Elite Series Pro circuit this coming season. Matt, 25, earned his berth through the Southern Opens, while Jordan, 23, earned his through the Central Opens. Both men made names for themselves in the Carhartt Bassmaster College Series through Auburn University. In 2012, Matt beat Jordan in head-to-head competition to qualify for the 2013 Classic. The next year, Jordan qualified for the 2014 Classic, finishing in sixth place.

Fans can receive an email reminder for the show by joining Ike’s Fish Heads Nation and can opt-in to the monthly newsletter for links to videos and periodic discount offers. They also can watch videos of previous shows at MikeIaconelli.com/Ike Live and watch or subscribe to clips on YouTube at Going Ike.

About Mike “Ike” Iaconelli
A South Philadelphia native now living in South Jersey, Mike Iaconelli fell in love with fishing at his grandfather’s side in the Pocono Mountains of Pennsylvania. He began fishing in tournaments after high school, joined the pro-am circuit in 1992 and turned pro in 2000. In 2003, he won the Bassmaster Classic. To date, he has won Bassmaster Elite, Classic, and Open championships, including the Bassmaster Elite on the Delaware River in August 2014, and earned over $2 MM in prize money. He and fellow fishing champ, Pete Gluszek, run The Bass University, which offers intense 2-day fishing classes that bring avid amateurs and professional fishermen together.