The Wacky Rigged soft stickbait has become one of the most consistent fish catchers in the sport of bass fishing over the years.  While it generates a lot of bites, that is not it’s only benefit, the rigging method itself allows anglers to conserve soft plastic stickbaits that get torn up quickly from traditional Texas Rigging.

In our latest Seaguar Hookpoints, we explore the rigging of the Wacky Rigged Senko with Seaguar pro Stetson Blaylock of Benton, Ark. 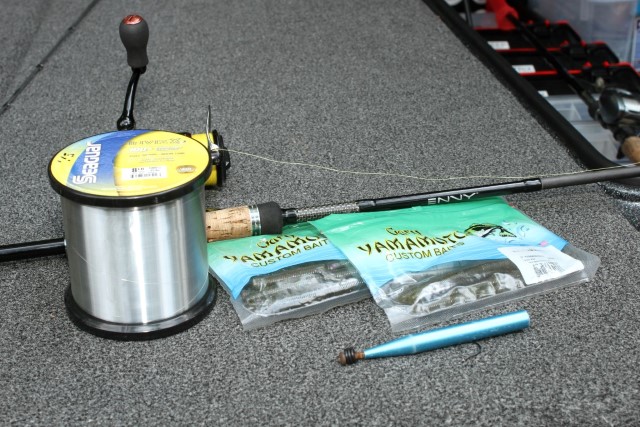 As you will see from this photo, here are the components of Blaylock’s Wacky Rig setup. He uses a 7’1 medium action spinning rod from 13 fishing and a high speed spinning reel which he spools with 15 to 20-pound-test Seaguar Smackdown braided line, tipped with a leader of 8-pound-test Seaguar Invizx Fluorocarbon line. He uses a size 1 to 1/0 Wacky Rig hook, and a Yamamoto Senko with an O-Ring and a lead nail weight in the nose. 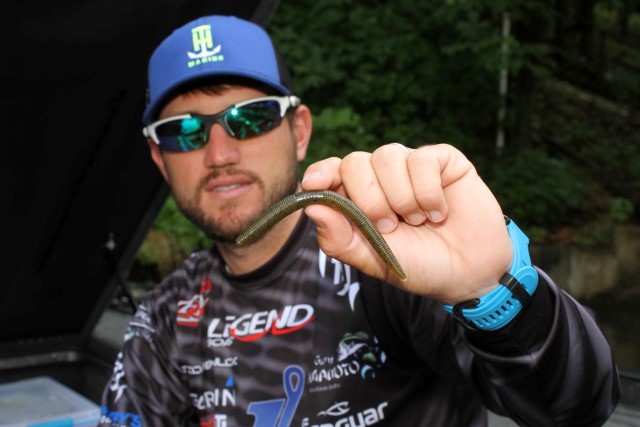 Here is the Senko soft stickbait, and when he is finished it will be hooked in the middle, kind of like he is demonstrating here. 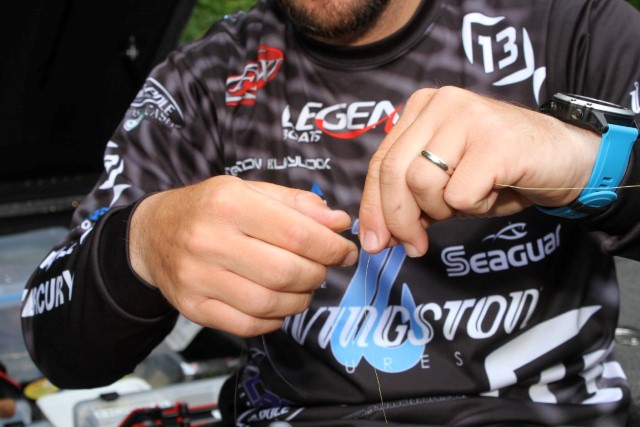 But first, let’s start by discussing the fact that, like many pros, Blaylock likes using Seaguars’ braided line as a main line and Seaguar Fluorocarbon as a leader. This gives him the combination of low stretch and feel of braided line, with the low visibility characteristics of fluorocarbon. For tying the Seaguar Invizx Leader onto the Seaguar Smackdown braided line, Blaylock ties the Alberto Knot. 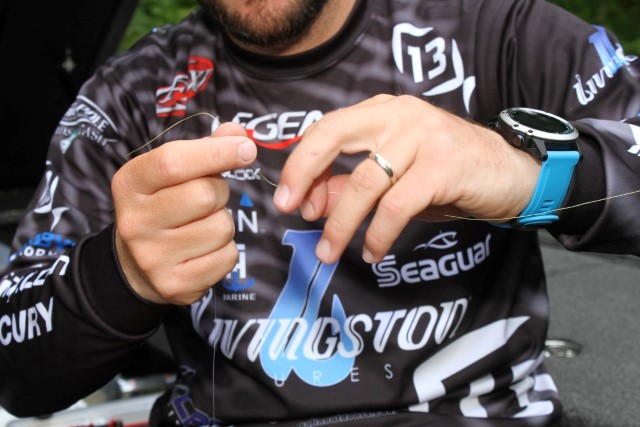 He starts by making a loop in the Seaguar Invizx Fluorocarbon line, then drops the tag end of the Seaguar Smackdown braid into the loop from the top. 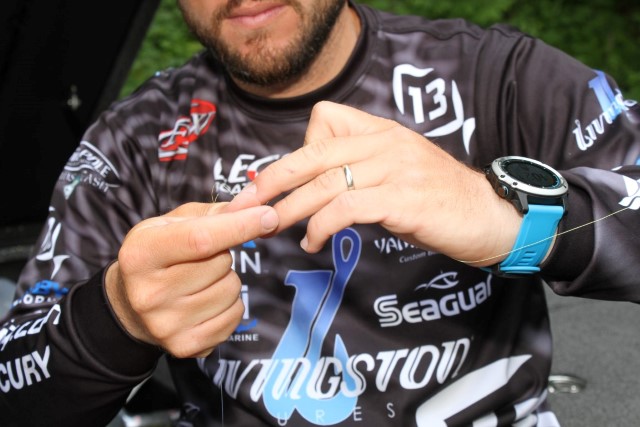 Holding both the doubled end of the looped Invizx and pinching the Smackdown braid and the leader line at the top, Blaylock wraps the braid around the loop seven times towards the leader. 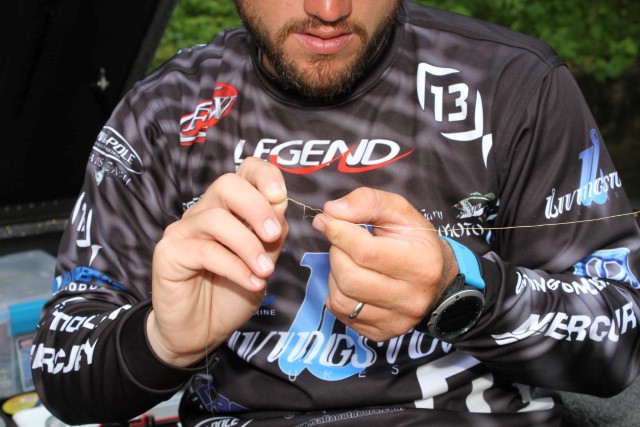 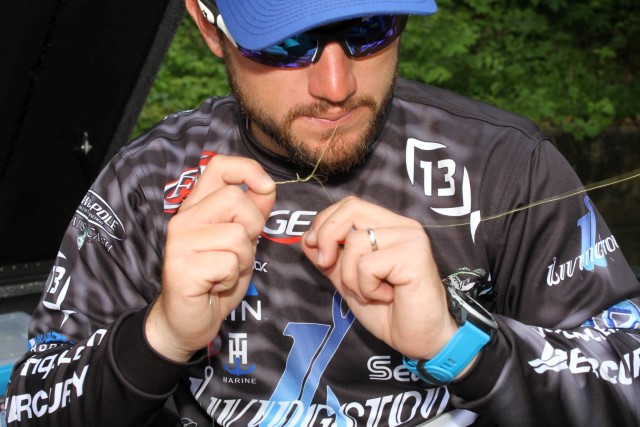 Keeping everything snug by holding the tag end of the Smackdown Braid in his mouth, Blaylock begins to snug the knot, gathering the Invizx leader and the Smackdown braid together. 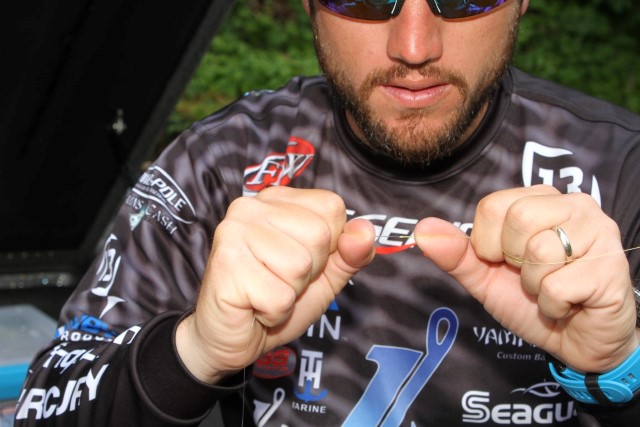 After wetting the knot with saliva, Blaylock pulls all four ends of the knot until it snugs tightly, then pulls the main line portions of the Smackdown braid and the Invizx leader to cinch the knot completely. 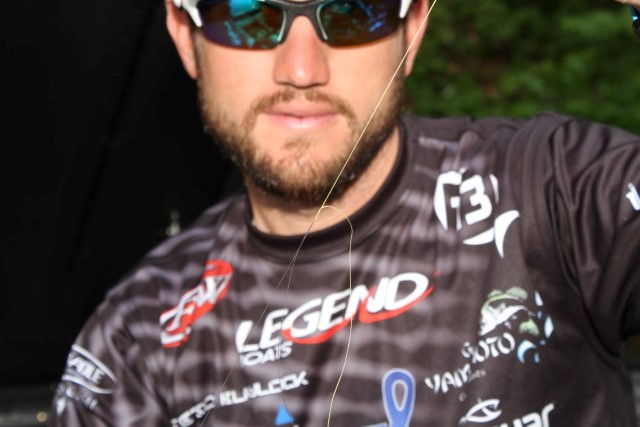 See how small and compact the knot is? It is barely larger than the diameter of the 8-pound-test Seaguar Invizx Fluorocarbon line. 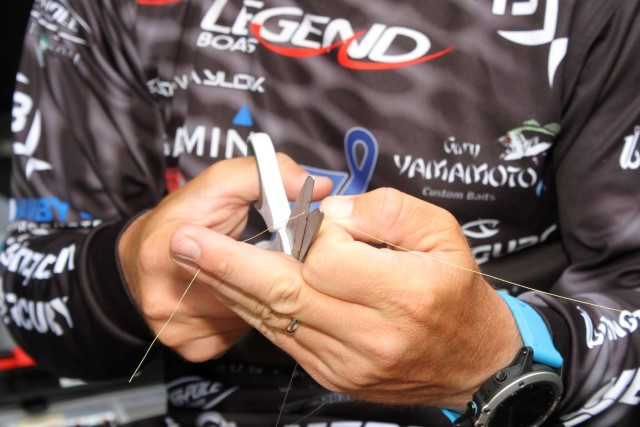 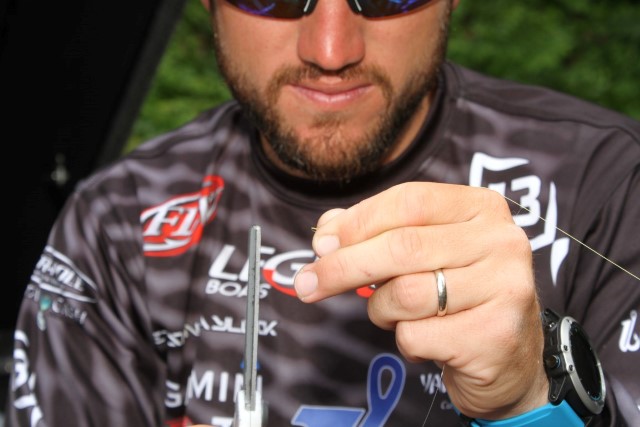 Next, he trims the tag end of the Invizx Fluorocarbon line tight to the base of the knot. 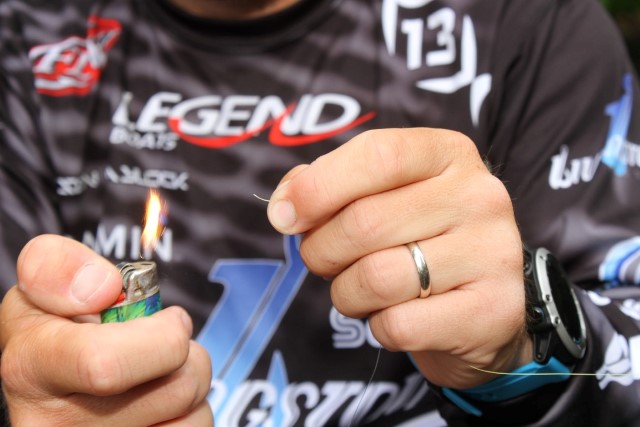 Next, he grasps the knot in his hand, pinching the small tag end of the Smackdown braid in between his forefinger and thumb. He then uses a lighter to burn the tag end of the braided line being careful to keep the knot away from the heat. 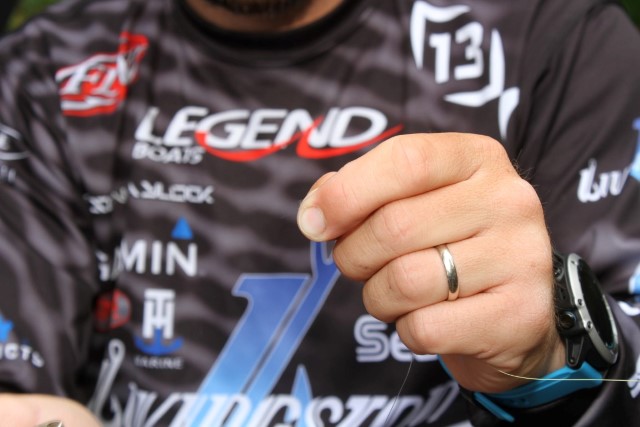 It’s important to stop burning the tag end of the Smackdown braid before it gets to his fingertips. 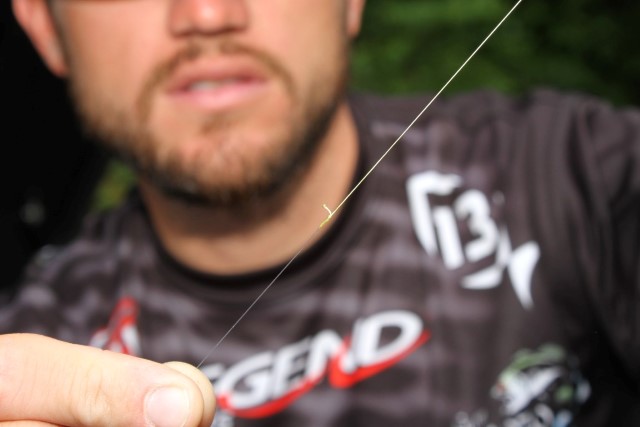 Here is the completed Alberto Knot. Blaylock believes the extra tag end of the Smackdown braid allows for a little room for the knot to snug down without slipping under the pressure of a hooked fish. 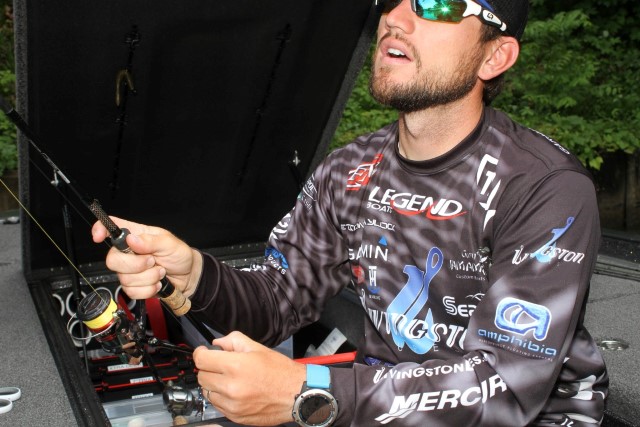 He then reels 7 to 8 feet of Invizx Fluorocarbon off of his spool, being careful to not pull the Alberto Knot into the reel to avoid extra stress on the connection point, and nicking of the lines in the spool. 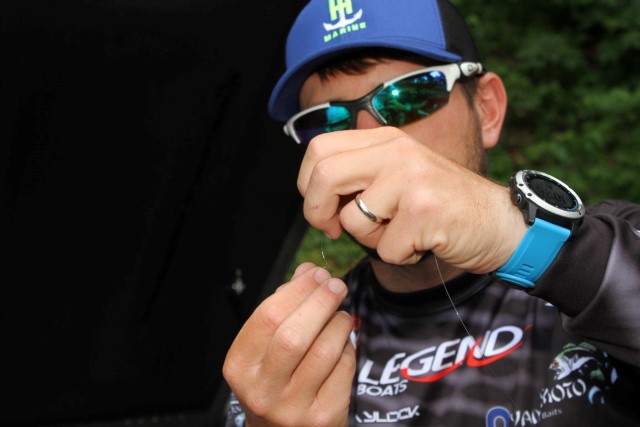 Now it’s time to tie the Wacky Hook onto the end of the Invizx Fluorocarbon Leader. 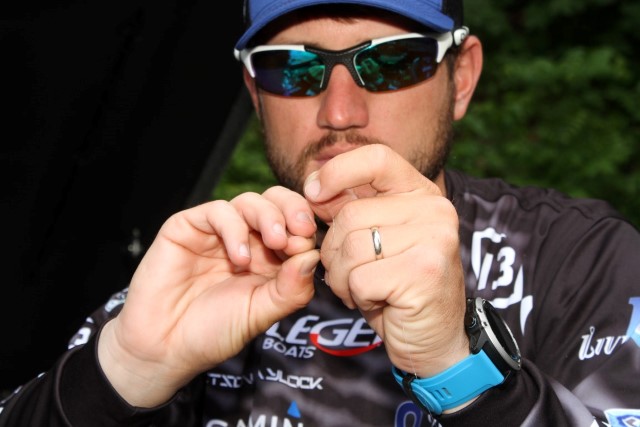 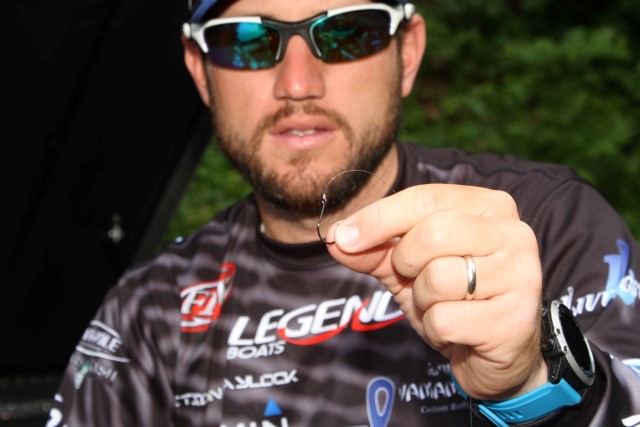 He trims the tag end close and, leaving a small, strong knot of Invizx Fluorocarbon at the top of his Wack Rig hook. 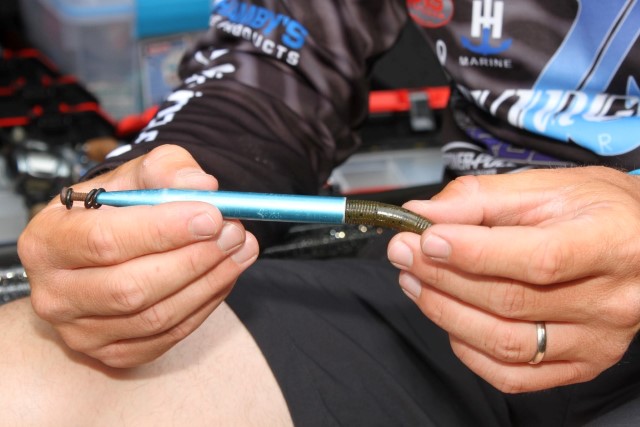 Now, he inserts the head of his Senko into the Wacky Rigging Tool tube, notice how the rubber O-rings are preloaded on the tube. 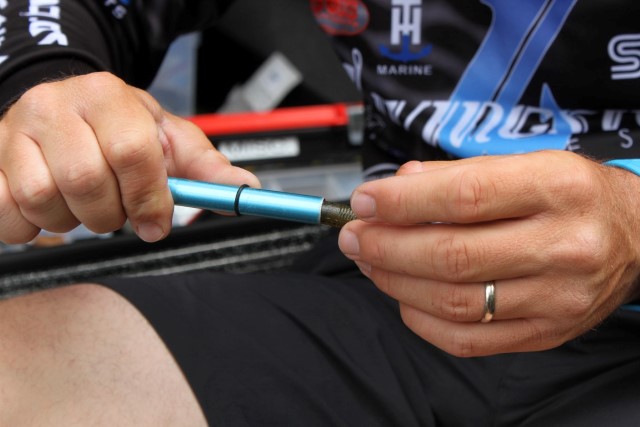 He begins to roll one of the preloaded O-rings down the tube. 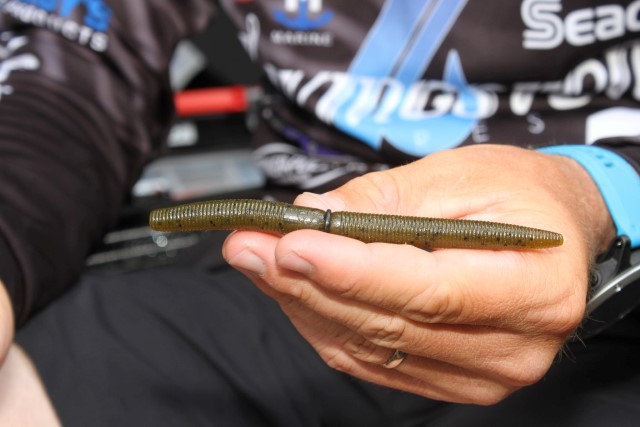 He rolls the ring onto the Senko slightly ahead of the middle of the bait. 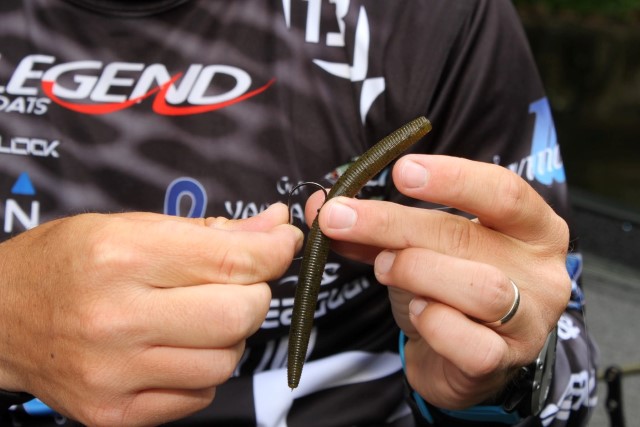 Next, he inserts the hook point under the O-ring with the hook point facing towards the tail of the Senko. This make sure that when the worm is nose down on the bottom, when a fish strikes, the hook point will be in the proper position for hooksetting. 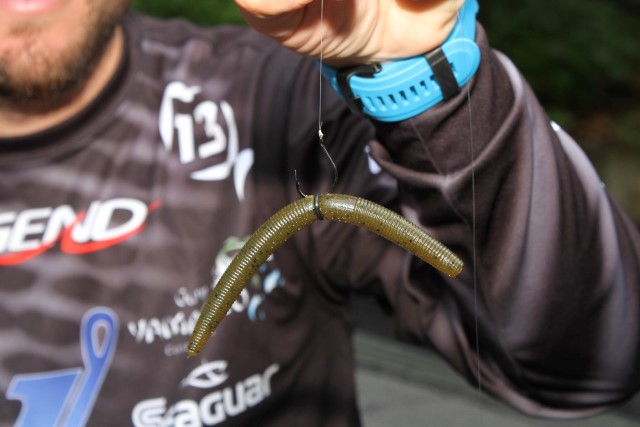 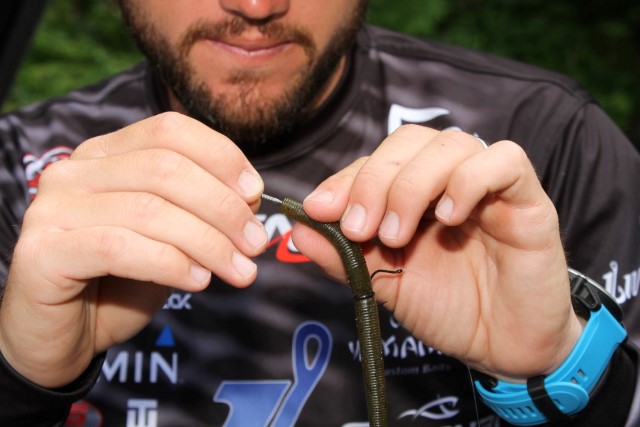 For a quicker, more spiraling fall, Blaylock will often insert half of a lead nail weight. There are tungsten nail weights available on the market as well. 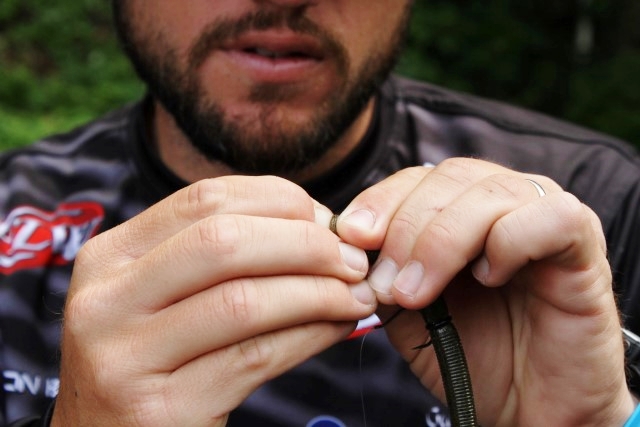 He pushes the nail weight all the way into the plastic so that it disappears. 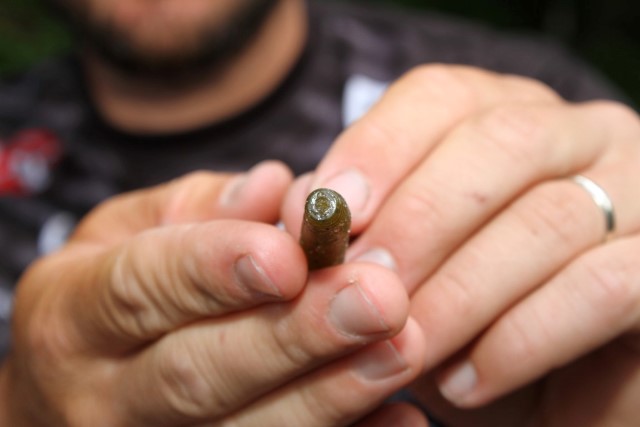 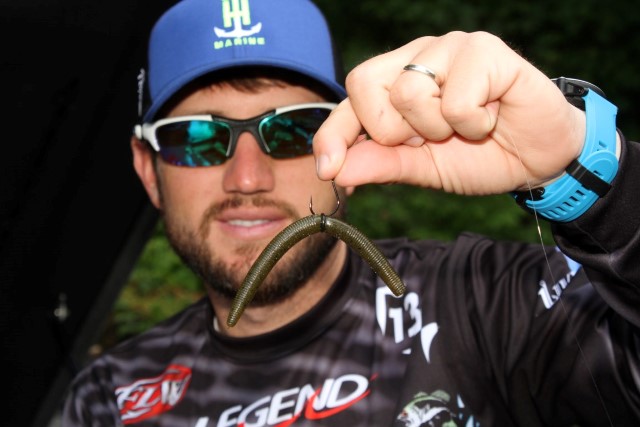 This is Blaylock’s completed rigging of the Wacky Rigged Senko. 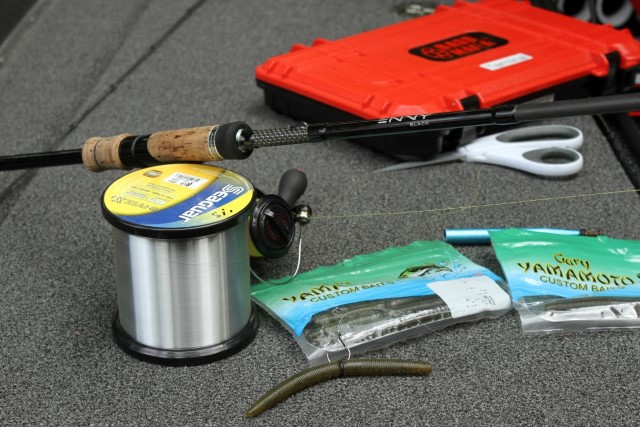 A Wacky Rigged soft stickbait can be an excellent choice for when bass are finicky, and when set up this way, as Stetson Blaylock does, you get the ultimate combination of strength and feel by using Seaguar Smackdown braided line as the main line and a quality fluorocarbon like Seaguar Invizx as the leader.

For many of the items needed to set up your own Wacky Rig are available at Monster Fishing Tackle.