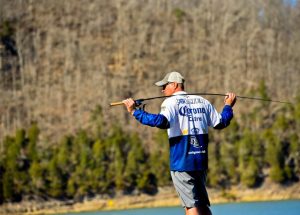 Late summer to early fall can be a very challenging time of the year for consistently catching quality stringers of fish.  August and September fishing in my neck of the woods (East Tennessee) can sometimes feel extremely random.  My advice for anglers looking for a solid day on the water is:

Go Big, Go Shallow
The reason I advise this is for two reasons; the forage (usually gizzard and thread fin shad, and also bluegill) are large in size that time of year, and they begin to move to shallow water.  The mature shad spawn in May and then grow throughout the summer.  I don’t know how long all varieties of shad live but we’ve got some very large ones on the Tennessee River lakes by August.  The shad will often swim alone or in very small groups when they move shallow as well.

The reason the baitfish move shallow is because the water quality out in deeper water often begins to deteriorate in late summer.  Oxygen levels are often better near shore than out on the ledges so they move shallow, for the most part.  You’ll be wise to try and imitate them obviously.

This shallow movement will work for a decent amount of time until you begin to see the balls of smaller shad (the current year hatch) moving into coves.  Once you start seeing fish targeting those shad by busting the bait-balls, the shallow, big-shad pattern begins to go away.

How to Target
The two things I do to target these shallow fish in late summer and early fall are by throwing bigger baits and covering water.

My baits of choice depend a lot on the amount of grass in the lake.  If the lake has scattered grass I throw a seven-inch stick bait and a seven-inch paddle tail swimbait.  If there is very little grass I like big, flat-sided, homemade crankbaits.

It seems though that even lakes that would qualify as having no grass will have water willow or some sort of “bank grass” this time of year.  Seeing that grass should be an automatic tip-off that the water quality in that 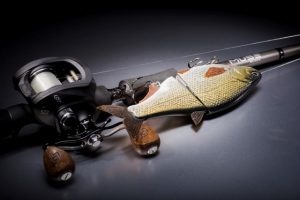 area is good.  Vegetation of any sort will add oxygen to the water and create a place the baitfish, and the bass, will seek out.  Fishing patches of water willow can be pattern in itself as summer begins to wane.

Grass lakes can be trickier because the fish have a much larger area in shallow water to spread out.  Grass in shallower water is often matted-up in late summer.  Grass mats provide shade which pulls in bait fish.  They also have better oxygen levels that have the fish moving back shallow.  In August I am going to be moving back to shallow mats on fisheries like Kentucky Lake.  That’s where more tournaments will be won in comparison to out deep.

If the water clarity is good oftentimes you can see the bass cruising the shallows.  The bass will often gang up in small packs to hunt.  Someone coined the term “wolf pack” and it stuck.  Chasing “wolf pack” bass can a very fun way to fish.

Another enjoyable part of fishing in early fall is that the Roman-Made Negotiator swim bait will come into play again.  This bait is what is called a “glide bait” and big bass will absolutely maul it.  I use it a lot before summer begins and can’t wait to get it back out once the fish move shallow.  There’s not a bite more ferocious than one on the Negotiator.

Gear
Let’s talk about the gear for a minute.  Throwing bigger baits means also beefing up the gear.  For instance, the crankbait setup is not your normal one with a composite rod.  Fish targeting big forage don’t nip at your bait.  When they hit it you’ll know.  I use a 7’1”, medium-action, Muse Black graphite rod from 13 Fishing paired with a 6.6:1 Concept C reel.  The graphite Muse Black rod helps cast a larger bait much more effectively than composite.  With regular water clarity 15 lb. 100% Fluorocarbon fits the bill. 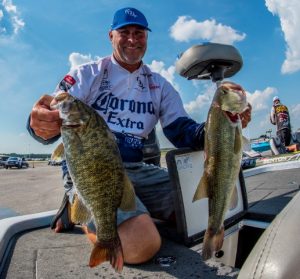 A Nice Pair of Bass for Brandon Coulter

For the stick bait I use a 7’6”, medium-action, 13 Fishing Envy rod paired with a Concept C reel.  I will point out that the line and the hook are key for this technique.  I really like to use braid with a fluorocarbon leader so I use 30 lb. Mustad Wish braid with a 17 lb. 100% Fluorocarbon leader.  Mustad’s new 2X Big Bite worm hook is incredible for stick baits.  The shank is longer for increased hook-ups and the offset allows you to rig a stick bait absolutely straight, every time.  For these larger stick baits I use the 6/0 version.

For the seven-inch swimbaits I use the new 8’, heavy-action, Muse Black Swim Bait rod from 13 Fishing.  I fish it with the new 8.1:1, Concept A3 reel.  The gears on that reel are just amazing.  Pick one up and you’ll know exactly what I mean by that.  The spool holds an amazing amount of 20lb. fluorocarbon line.

And finally, the Negotiator requires an 8’, extra-heavy action, Muse Black rod with a 6.3:1, Concept A3 reel from 13 Fishing.  It also requires a healthy heart to handle the ticker-stopping strikes from those hungry wolves prowling around near the bank.

Final note
Covering a lot of water in a day is taxing on equipment, especially batteries.  In 2015 I switched to Relion lithium batteries and have been thoroughly impressed.  My trolling motor runs all day long at 100%.  Reduced weight in the boat (roughly 250 pounds) allows for a quicker hole-shot and my boat drafts much less water.  This helps me be more efficient throughout the day and is a huge advantage over the competition.