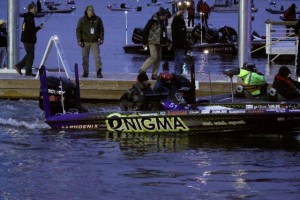 13 second place finishes, four of them in the Bassmaster Classic alone.

While his career escapades have earned him the nickname, “The Natural,” the sum of his close calls to date have also earned him the title of “Runner Up.” Going back to his days competing on the West Coast exclusively, Aaron Martens has built one of the most impressive careers in the sport of bass fishing. However, to the public, he always carried the stigma of being unable to close a close one.

I believe this year has proven that Martens has turned the corner competitively.

In late November of 1993, I was a 23-year-old injured college catcher recovering from reconstructive shoulder surgery. I attended The Master’s College in Santa Clarita, Calif., some 10 miles from the famed Castaic Lake. I went out for a day with my friend John “Zank” Viazanko between my surgery and heading home at the end of the semester for Christmas break.

While we were on the water, we bumped into another young angler and a friend spooning fish vertically in the Ski Arm area of the lake. The angler hollered to Zank and told him to come look at the newest Lowrance fishfinders (then the X70A) on his boat. Zank jumped in the boat with him while I fished nearby in his boat. They fished for a half an hour or so, then Zank suggested I take a ride with the other guy in his boat because it was pretty fast.

We ran around the peninsula of the lake and up the Fish Arm before shutting down to fish a little more. After fishing for a while later, we got off the water and went and had lunch at the local Froster’s Freeze in Castaic. We talked for an hour or so – actually, Zank and the other angler talked while I listened mainly – then we went our separate ways. 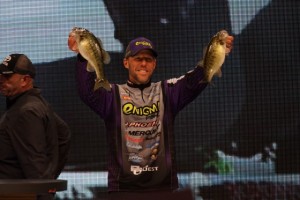 That angler turned out to be Aaron Martens. I have worked with him professionally too many times to count, but as a fan and friend, I have followed his career with great interest ever since.

He has been a winner as long as I’ve known him. I’ve seen him win team tournaments on Southern California Lakes, Pro-Am events on lakes all over the West and Bassmaster Opens and Elite Series events, FLW Tour wins and a pair of Bassmaster Angler of the Year titles. However, because he has experienced the runner up position so many times, he has been labeled an angler “unable to close out the victory.”

I personally have never felt that way about Martens’ career because I have seen too much from him over the years. But, I can understand why so many feel like that is his reputation. The past three years as a whole, but primarily this season should show the fishing world that he is coming of age.

At a time when many anglers are starting to transition downward in their careers, Martens has found another gear. In 2013, when he won his second Angler of the Year title, Martens began the year with an 85th place finish at the Sabine River.   While many anglers would have written off even their chances at qualifying for the Bassmaster Classic that year, Martens came all the way back to win the sport’s most coveted title.

The 2013 comeback was the start of the trend, then this season at Havasu, he showed his creativity and brilliance applying a technique based on targeting areas with nesting birds to come from behind and win the event. He started the day in fourth place, more than two pounds behind and won by two pounds exactly. That event occurred one week after Martens finished second for the 13th time in his B.A.S.S. career to Justin Lucas on the California Delta. 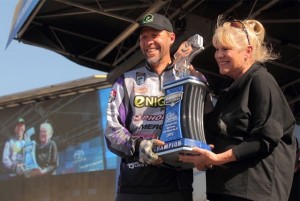 But this week at the Chesapeake Bay proved just how far Martens has come as a professional. More to the point, the final day proved how far the man has progressed in his mental game that has allowed him to win events he might have let slip away four or five years ago.

If you followed Bassmaster.com through the final day of the event, you would have seen on BASSTrakk and read on the Live Blog that Martens quite literally had an empty livewell at 11:00AM EST, and the Live Blog said that he had missed or lost several bites. By 11:36AM EST, Bassmaster.com Editor Steve Bowman reported that he had caught his second keeper. At 12:09PM, Bowman reported Martens losing a fish and then boating his third keeper, a four pounder.

By 12:19PM, Bassmaster Senior Editor Bryan Brasher was writing about how this day was reminiscent of Mike Iaconelli’s tough last day at Lake Guntersville in April when he weighed only one keeper after having led the event going into the final day. By 12:33PM, Steve Wright reported that Martens had his fourth keeper, and then at 12:54PM, Wright reports that Martens has sealed the deal with a seven pounder.

At 1:07PM, Wright reported Martens culling with a three pounder, then at 1:30PM, he reported Aaron culling again with one weighing more than three and a half pounds to bring Martens’ total weight to the 21 pounds, 5 ounces that he would weigh to earn his second victory of the season and push his lead in the Toyota Bassmaster Angler of the Year race to 69 points over Lucas.

In less than two hours, Martens went from the Bassmaster reporters explaining him being on the verge of a monumental collapse to having one of the most memorable final days in Elite Series history. 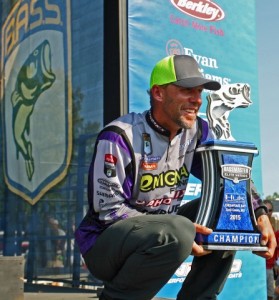 I truly feel that yesterday was Martens’ final example of showing that he has become the complete professional angler on the water today. His penchant for intuition is well established. He has shown his attention to detail and creativity so many times that it is expected out of him. However, while most see him as the most naturally gifted angler on the professional level today, they also see him as the most volatile.

He is in the midst of building the most impressive Elite Series season to date. Skeet Reese had what I consider to be the best Elite Series season in 2010 when he won two events and had four other top five finishes. Reese’s average finish that year was just over 15th place with a 48th and 59th place finishes being his worst. With only one regular season event remaining, Martens is currently averaging finishes at just over 14th place, including his two wins. His closest AOY competitor, Lucas, is averaging just over 24th place finishes for the year.

With his season thus far, and his steadfastness and mental toughness on the final day at the Chesapeake Bay event exhibiting just how far he has come as an angler; I believe that we are not only witnessing the best Elite Series season performance, but we are also witnessing the coming of age of the most gifted angler we’ve ever seen; and that should terrify the rest of the field.