Being Heroes and Spreading Joy

Forgive me for a moment while I depart from the usual content style of Advanced Angler to write from my heart for a minute. Normally, the pages of Advanced Angler are reserved for pieces that are designed to help anglers learn better how to use techniques or equipment to catch more and bigger fish.

This particular column is also designed to be a “how to,” but, instead of learning how to toss a crankbait like the pros, or how to punch, flip, frog or dropshot; this one is about learning to see the joy of our sport, and how to spread it. I’m not implying that we don’t spread the joy, but we can get so wrapped up in the day to day of operating our businesses that we forget that our jobs are built around a hobby for most people.

This whole column started for me when I was watching a sportscast on the Internet that showed a video of Boston Red Sox pitcher Josh Beckett handing a ball to a young fan as he walked from the bullpen to the dugout before a game at Fenway Park.

The boy was in the field level stands with his father and presumably his grandfather trying to take a picture of Beckett when the All Star pitcher veered left and handed the ball to the boy. The youngster began celebrating with the ball, and then, he began to show a different response.

The boy, who later described that Beckett is his favorite player had an obviously uncontrollable emotional response to what Beckett must have thought was a very mundane occurrence. The story hit the local news, and the boy and his father and grandfather were interviewed as to the story.

It got me thinking about our sport, and the response that we see from fans when they get a chance to meet and greet not only the sport’s best, but also the regional pro that competes near our homes, and to some extent, those of us who work in the industry. 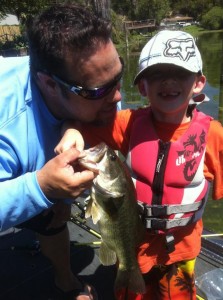 I’ve seen several unselfish things over the past couple of years that have touched me, and to a lesser extent, have been able to be a part of some of the moments that might seem so simple to us, but they touch others forever.

Personally, I got to experience the joy of watching a six-year-old catch his first bass off of an honest to goodness, bona fide bass boat. Only, this wasn’t any normal bass boat where I was observing through my camera lens as I so often am; this was on my boat.

I volunteered to host some people for a fundraiser at Church, and when the person who won the trip wanted to bring his six-year-old son with him, I had some trepidation at first. His dad assured me that he was a fisherman and he would love it, and would probably outcast us for the whole day.

We got some minnows for him, but they didn’t make it very long in the hot Clear Lake water and the bass didn’t respond to them anyway. But, when he picked up a Jackall Crosstail Shad on a darter head and tossed it near a dock that he caught a small 8 to 10-inch largemouth.

His dad snapped a quick picture and we released the tiny bass into the water, only to do it three or four more times in the next few minutes. The joy on his face was absolutely evident with each battle, and when he finally boated a keeper he was thrilled. When I caught three pounder a couple hours later by Punching, he was awestruck. The smile on his face at any of those moments was only matched by the smile he displayed when we first took off across the water in my boat for our first run of the morning hours earlier. 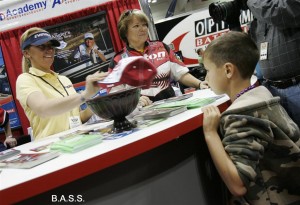 I’ve watched over the years as some of the best anglers in the sport have taken the time to share their profession with a youngster, a soldier or a person suffering from an illness. The response I’ve seen has been awe inspiring for me.

In the 2009 Bassmaster Classic that was won by Skeet Reese, I watched as more than 200 young girls and their parents waited in line at the Academy booth to get an autograph from Kim Bain-Moore; the first woman to compete in the Classic. Bain-Moore was the object of some scrutiny in the event because she qualified from the Women’s Bassmaster Tour; but she faced the criticism with grace and professionalism.

The real winners of her involvement at that Classic were the 1000 or so young women and girls on site at the tournament and the many thousands at home who saw her compete. Those people got a chance to be inspired to try fishing, or who knows, to someday try fishing as a profession. 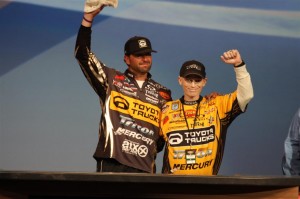 This past year at the 2011 Classic, Gerald Swindle showed how much a person could mean to another when he brought Kevin Oldham, who suffered from stomach cancer, and passed away less than a month later, on stage with him during the second day weigh-in at the Classic. Swindle was obviously touched by Oldham’s story, because it was the same disease that claimed his brother Tony only a few years earlier.

Skeet Reese took a moment at West Point Lake to take a young cancer patient; Gabe Hawks on stage with him as a way of trying to help boost the young man’s spirit in his battle. He and his wife Kim also put on a fundraiser / Kids Fishing Day in their home community to try and help complete the local community center.

These are only a few of the things I’ve witnessed over the past few years, but they all seem to have made an indelible mark in my mind. The sight of that young boy tearfully receiving a baseball from a baseball player shot these memories to the front of my mind like a shotgun. 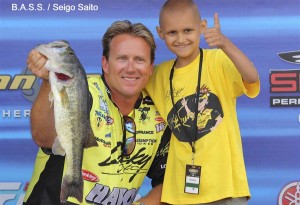 I’ve seen many folks give of themselves over the years in this sport, from my colleague Don Barone (I use that term lightly only because we work at the same profession) and his Tackle the Storm Foundation, to B.A.S.S. and their work over the past two years with the Hope for the Warriors Foundation. Randy Howell and his work with the King’s Home and Mike Iaconelli staying to sign autographs until everyone has gotten their moment with him.

These are but a few of those memories and moments that I have been privileged to witness, and I have seen most every one of the sport’s participants reach out in one way or another throughout the years. I’m sure they have all left a bigger mark on the lives of the people they have touched personally

All of that to say this; while the big names of the sport get chances to make these impacts, we don’t have to be giant stars to give the same joy. I’m someone who tries to stay in the background. My job is to report what goes on in the sport from behind a camera; a face not visible to most. However, on one day recently, I got to share the sport I love with someone who had never been able to see it from my perspective. 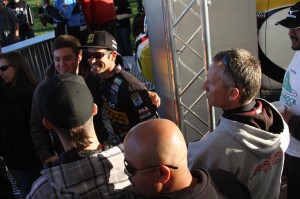 We all get the opportunity to do so each time we tow our boats, pack our rods or publish to our websites and magazines. While we “work” in this business, we owe it to ourselves and others to never forget that we are blessed to actually do what we love for a living, no matter the role we play.

To others, we are living a dream, and when we live a dream, we get the opportunity to be heroes and spread joy to a lot of people along the way.

Thank you to those mentioned here, and those not who share this sport every day with millions across the globe. 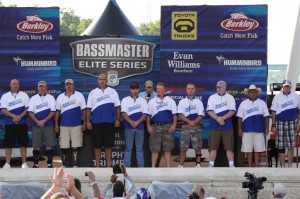