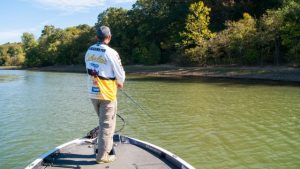 There are a typical set of quotes that can be heard coming from anglers across the country throughout the seasons, and it goes a little something like this.

Prespawn – “Dude, we caught so many, my hands are bleeding.”

Spawn – “Dude, they came up in waves overnight, they are everywhere.”

Early Summer – “Dude, I found two schools offshore with at least 200 bass in each; I feel really good about tomorrow.”

Late Summer to Early fall – “It’s too hot and the fishing sucks, I’d rather stay in the air conditioning.”

If that’s your lament now, James Niggemeyer said it’s time to head to the rivers.  “While this can be one of the most difficult times of the year to catch bass on many bodies of water, a river can offer pretty good shallow water opportunities,” said the Van, Tex. pro.  “There are several factors that make a true river impoundment a more consistent fishery, and one that tends to be shallow year round.” 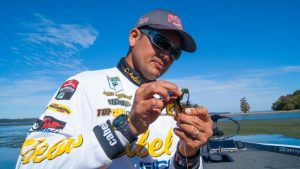 Niggemeyer is one who cut his fishing teeth in the deep, clear waters of the West, then moved to Texas and took up shallow water power techniques, but has developed a well-rounded game through 10 seasons competing on the Bassmaster Elite Series.  In order to compete with the toughest field in angling. Niggemeyer’s skillsets are varied, but he loves shallow fishing first and foremost, and a river offers him the chance to do what he loves.

He said the reason rivers are primarily shallow fisheries is their makeup.  “A true river is an environment where the relative lack of clarity and the constant flow make fish have to live in the shallows,” he said.  “That combination of elements makes finding cooperative bass a little bit more predictable than on many fisheries throughout the country.”

River Lures
Beginning with the belief that river bass tend to target smaller prey in general, Niggemeyer selects smaller sized offerings to match the conditions. “I tend to start with moving lures to locate what bass are holding on,” he said.  “After I find out their location, or I come to a good piece of cover, I will often try Pitching and Flipping near the cover to get strikes, but I scale those lures down as well.” 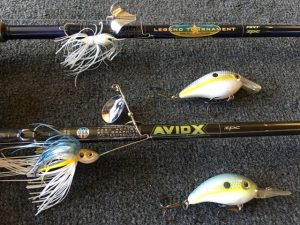 His selection is fairly simple. “I like to cover water to start, and I’ll use baits like the Strike King Mini Pro Buzz, the Little Mr. Money spinnerbait, a KVD 1.5 squarebill and a Series 3 crankbait,” he said.  “For Flipping, I’ll use smaller sizes as well, like a Rodent, or the 4-inch Game Hawg, a 3.5-inch KVD Tube rigged with a Tour Grade Tungsten weight and an Owner hook, or a 3/8-ounce Bitsy Flip jigs with small trailers on them.”

Because he is tossing lighter lures, he tends to stay with 7’ medium and medium heavy action St. Croix Rods Legend Tournament and Avid X Rods, and Cabela’s Verano reels spooled with 30to 50-pound TUF Line Braid for the buzzbait, and 12 to 17-pound Gamma Edge Fluorocarbon for the crankbaits and spinnerbaits.  When he turns to the Flippin’ setups, he runs heavier, 7’6 to 7’11” St. Croix Flippin’ Sticks and Cabela’s Verano reels spooled w 20-pound-test Gama Edge Fluorocarbon for hard cover or 50 to 65-pound TUF Line 4orce braid for around vegetation.

Considerations
Outside of the fact that the fish will largely be shallow, Niggemeyer said that there are several things to consider when venturing out onto a river to target bass.  “I tend to think of river fisheries differently than I do lakes,” said Niggemeyer. “While there is large forage available, river bass tend to feed on smaller prey, so I tend to scale down my offerings, and I concentrate primarily on the flow of the current.”

What that latter part means is that he tends to focus his efforts on areas where the current contacts the bank, and the cover associated with it.  “On the main river, I tend to start on outside channel bends because that is where the current washes against the bank,” he said.  “If the current comes into contact with current breaks along the bank, then there will likely be bass there.”

He targets the down current side of those current breaks with small crankbaits, spinnerbaits, buzzbaits and scaled down Flipping baits.

The Approach
Niggemeyer said he likes to work quickly, moving to outside channel swings (where the current contacts the bank and makes a turn) first. He targets rocky spots, stumps, brush, laydown trees, shoreline grass and dock 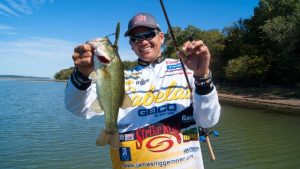 posts along them.  “I try to move quickly in the summer because I feel like the fish are going to be fairly aggressive with warm water and higher metabolic rates,” he said.  “By doing that, I feel like I can locate what they are holding on more quickly, and give myself a chance to duplicate the pattern.”

One thing, he has to factor into his boat positioning and control is the current.  If the current is swift, and he is using targeted presentations like Flipping and Pitching, then he points the bow of his Ranger into the current and allows the boat to drift.  While doing so, he uses his MotorGuide trolling motor to slow down his drift and position the boat in and out so that he can make precise presentations into the cover.  However, if he is using the moving baits and trying to cover water, he will often put the stern of his boat up current and allow the boat to drift faster, so he can cover as much shoreline as possible.

Final Admonition
The one thing that tends to give anglers pause in fishing a river system is the current, but Niggemeyer encourages anglers to see it as an opportunity.  “Don’t be afraid of the current; even swifter stretches, in the summer,” he said.  “The current washes food to the bass, so they are there looking to eat.  If you can maintain control of your boat, fish it, you may just find the best fishing you will experience in the summer there.”