Deep Cranking with the Crews Missile

Crankbaits are fish catchers. More importantly, crankbaits are fish locators. There may be no better tool for quickly locating biting bass than a lipped diving plug. Shallow, deep, lipless or squarebilled; the crankbait is a lure that most anglers have in bunches.

However effective they are at locating bass, finding the right quality bass is always the trick, and if you grew up around the Carolina’s and Virginias; you know the year-round effectiveness of the crankbait. In the heat of the year, deep crankbaits provide anglers a chance to present a reaction lure to bass on deep offshore structure, and a skilled angler knows how to take advantage of the details. 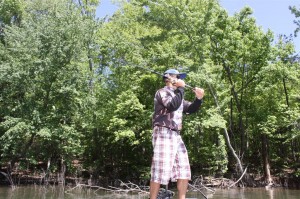 One of those anglers is five-time Bassmaster Classic Qualifier John Crews, from Salem, Va.

“I love deep cranking; actually, I love fishing crankbaits in general, but when the bass pull offshore and get bunched up on humps and ledges; a deep crankbait is one of the best ways to find, and catch them,” said Crews. “Crankbaits are often called “no brainer lures,” but, let me tell you, there is nothing un-intelligent about fishing crankbaits.”

Crankbait Country
Crews hails from the area of the country that David Fritts ruled for so many years; crankbait country. While they produce everywhere his area of the country, North Carolina, South Carolina and Virginia anglers have long been recognized as the best with a deep diving plug. Led by Bassmaster and FLW Champion David Fritts; the area produces crankbait royalty. 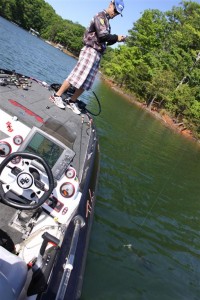 Crews said that being able to produce consistently in his home region involves knowing everything you can about the lure, the water, the bait and the cover or structure that they are fishing. “Anglers out here get really detailed in their retrieves, I’m talking about lining up to present a crankbait to a single piece of cover or structure,” he said. “Once they place the perfect cast, they begin a retrieve that will find that lure deflecting off of a single boulder or stump triggering a strike from hopefully a big largemouth.”

Crews’ Cranking Equipment
Crews is such a crankbait aficionado that he was given the opportunity to design lures for his sponsor SPRO. He began with the Little John; which is a flat sided squarelip for cranking in shallow water. He soon added a Little John MD, a medium diving version of his first bait, then a Little John DD, a big deep diving version, a Fat John; a bulky squarebill, and most recently the Little John Baby DD, a medium running version of his big deep diving plug.
His crankbait approach relies on knowing the capabilities of the lures, and what each change in components will do to the response of the lure.

“To get the most out of the capabilities of the Little John DD and the Baby DD, you have to use the right equipment. Long casts really give the bait a chance to reach as deep as possible,” he said. “Because a long cast is so crucial, it really is designed to work on an extra long rod. Any stout crankbait rod will do, but one that is 7’6” or longer is best, but it still needs to have a tip that’s soft enough to allow the fish to take the bait deep when they strike.”

He uses a Pinnacle Perfecta DHC in either 7’6” to 7’11” medium heavy models and pairs them with a Pinnacle Optimus XT 4.7:1 reel for power cranking, or the 6.4:1 speed if the fish need a faster retrieve, but the 4.7:1 sees the bulk of the duty. He chooses to fill the spool mostly with 12-pound-test Vicious Pro Elite Fluorocarbon for the proper feel and handling of the lure. If he needs to drive the baits a little deeper, he turns to 10-pound-test. 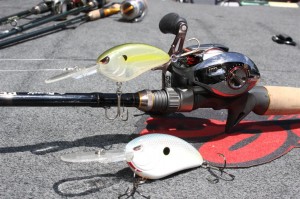 Presentation and Retrieve
Because crankbaits are at their best when they reach their optimum depth range, Crews tries to make really long casts. He believes that to get the most out of the lure, he has to use a little match to make tings most effective. “I try and make a cast that is twice as long as the depth I’m trying to hit,” he said. “For example, if the cover I’m targeting is 19 feet deep, then I want my cast to go at least 38 feet. Because the dive angle of the Little John DD is so steep, I will want to position my boat so that the cover I’m targeting is about two thirds of the distance away; that way the lure has plenty of time to get down and work effectively.”

He uses two types of retrieves to trigger strikes, and he allows the fish to tell him which is going to be the most effective for the day. The first approach in the summer is to grind the bottom. “After I make my long cast, and begin with a medium – fast retrieve to get the lure down to the bottom,” he said. I power the bait over, around and through any rocks, stumps and shellbeds I can come into contact with Bass that are aggressive will often crush the bait on this type of retrieve.”

His other approach is kind of a bump and run type; especially if the bass are needing a little coaxing. “After I make contact with a hard piece of cover, I will allow the bait to pause for a moment,” he said. “After pausing, I begin the retrieve again; this is often where strikes occur.”

He designed his lures to be effective at both retrieves. “I made these baits so that they would slowly float back away from an obstruction,” he said. “If it was a suspending bait, it would hover around the cover, but this way, they back up slightly, just like a bream who uses only its lateral fins to sneak away from an attacker before it is seen.” 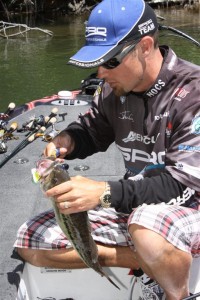 Choosing Colors
Crews chooses his colors based on the water clarity and the forage. “Most of the time my first two choices would be Cell Mate and chartreuse and blue; those two colors produce just about everywhere in the country,” he said.” But there are other times that I would choose other colors.”

For clear water conditions, with visibility of three feet or more, a Clear Chartreuse or Spooky Shad are great choices. in stained water, or in overcast conditions, Citrus Shad is worth a look because it has reflective scales pattern on the side of the bait to give off a little flash.