Beyond the Pond – Debbie Morgenthaler

Living Dorsett’s concept that success and inspiration go hand in hand has held true for many. It has been so for athletes to musicians, for teachers to politicians, for butchers to bakers to candlestick makers. To be the President of the United States or a leader of a Girl Scout troop, one’s specific goal is not of relevance. Success lies in achieving that goal and to achieve success one must be inspired.
While inspiration is found in different places for different people, FLW Tour Pro Chad Morgenthaler has been blessed to find it at home in his wife, Debbie.

After living the married life and working nine to five for a decade an idea became a possibility. Prompted by her husband’s passion for his fishing hobby and his near qualifying status into the Bassmaster Tour, Mrs. Morgenthaler inspired her husband to make the leap into the pro tours.
Her exclamation that they sell their house and give up the stability of her husband’s regular income as a fire chief was met with disbelief from friends and family. She laughingly exclaimed, “They thought we were cuckoo for Cocoa Puffs.” Little did the naysayers know her inspiring idea 12 years ago would be the starting point for the Morgenthaler’s success. 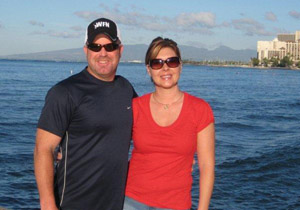 Believing it was the right move to make, Mrs. Morgenthaler admits, “I put the pressure on him at the final tournament in Texas.” Telling him if he finished high enough to qualify for the Tour, she already had the house sold; the statement seemed to do the trick. Everything fell into place and so began the Morgenthaler’s life on the road.

For the first five years, Mrs. Morgenthaler stayed at her University job, fulfilled the business obligations that her husband’s profession required from home and traveled with him as he job allowed. As a cost saving measure, Morgenthaler shared travel expenses with another angler.

When she gave up her full-time position at the University, they invested in a fifth wheel camper and along with their two cats Mufasa and Smokey Joe; the Morgenthalers became a camping family.
Sharing the praises of life on the road, Mrs. Morgenthaler stated, “I never would have thought in a million years my life would be like this; busting out of the normal grind but it is freeing.” 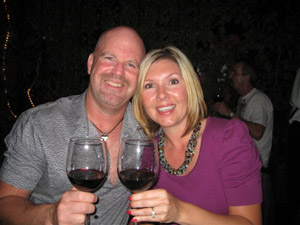 As for current times, Mrs. Morgenthaler’s days in University business have been exchanged for their bass fishing business, and like many wives with touring husbands; she is up at the crack of dawn to help her husband get out the door. She starts the day by ensuring he has a good breakfast and a lunch for his day on the water, as she explained, “For Chad to sustain his energy, eating well is very important.”

Lunch, grocery, equipment or tackle runs are times Mrs. Morgenthaler shares with other traveling wives. Weigh-in, dinner and helping prep for her husband’s next day on the water is typically how she wraps up her day.

She sees the differences in her days at home and on the road both with plusses and minuses but thinks her traveling days require more of a balancing act. Describing her life on the road with no days off comes with appreciation, “Even though you’re working, it still feels like more freedom, being able to do work in your jammies.”

Mrs. Morgenthaler sees her job as easing a burden for her husband. She explained, “Sponsors require a lot, tournaments require a lot, fishing requires a lot and the part that I take care of helps keep Chad on his A-Game.” 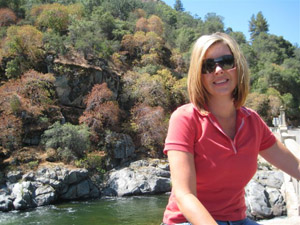 Sharing the days on the road with the friends that are her “road family” 70% of the year, Mrs. Morgenthaler said they become very close, caravanning around the country. She explained they come to rely on each other, as one would their biological family. She remarked, “From major holidays, to summer cookouts and birthdays to borrowing a cup of sugar; the road family is where you turn.”

Aside from the freedom and the close-knit group of friends, Mrs. Morgenthaler finds one of the luxuries that the life affords her is to live one of her own life’s passions, traveling.

She is always looking forward to road tripping to Upstate New York during the dog days of summer and returning to Branson or Table Rock. Mrs. Morgenthaler is thrilled with many of their domestic travel destinations and having the opportunity to learn about other cultures within the United States as well as the beauty the country holds.

In the off-season she also enjoys traveling to exotic countries and recently had the opportunity to tour Spain. Hoping to experience even more of what the world has to offer; Mrs. Morgenthaler anticipates future journeys. She enjoys learning about history, acquainting herself with small towns and the nuances of cultural differences. Remarking that elsewhere even a trip to the grocery store can be an experience, Mrs. Morgenthaler stated, “I believe understanding others origins can make a person more tolerant.”

Stating, “It’s not all peaches and cream”, Mrs. Morgenthaler reminds others it is a very demanding life. Likening the profession to legalized gambling she described her analogy, “You put down your entry fees, which is your bet and hope to win more money back than you risk.” 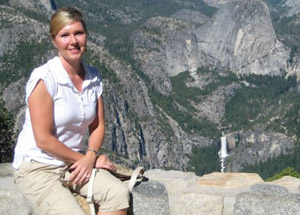 When talking about their success she remembers discussing their rules and boundaries when they got started. The Morgenthalers set a three-year plan and stuck to it. The boundaries entailed no charge cards, no credit purchases and no dipping into the retirement accounts. If they made enough money to live they would continue; if they did not they would follow plan B. She stated, “We hadn’t figured out a plan B but luckily we didn’t need one.”

As she looked back on the 12-year stretch that passed since their life-changing decision, Mrs. Morgenthaler thought they had weathered the ups and downs of the life well and didn’t really think she had any regrets. She explained that the ten years they spent building their financial stability in the regular work world and the foundation of their relationship gave them a perspective on their new life. She added, “I guess I’m more of a forward thinker, mainly because I don’t like to live with a lot of regret or “should have” in my life.” Mrs. Morgenthaler continued, “Sure there were situations in hindsight where we could have aligned Chad better, not fished so many events or chosen different tours but it’s really just my nature to learn the lesson at the time, apply it and move forward; I don’t ponder much on things I really can’t change.”

Happy with the “great ride” the life has given them, she can’t pinpoint one particular aspiration she wished for and explained, “Happiness; not money has always been A-1 in my life and that’s probably why most of my goals and aspirations for my life and Chad’s are more centered around experiences and things we want to accomplish.” She continued, “I just wish for us to be happy and at peace with life, wherever we are.”

Expounding on the successful career they have developed, Mrs. Morgenthaler continued, “I’ve always felt that we are very hard working, smart individuals who are willing to go the extra mile and that is what has made us successful and fortunately we are very compatible that way”. 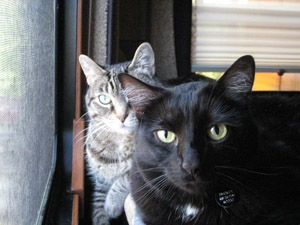 Her advice to others looking to follow in their footsteps began with “being able to take a leap of faith”. She recommended, “In today’s world it helps to have financial security to make it.” Crediting much of their good decisions to approaching their life as a business, Mrs. Morgenthaler stressed, “Even with the passion, you have to remember that you must make a living at fishing and you cannot lead only with your heart; yet, on the other hand you cannot forget to open your heart and your mind up to the experience that you have the opportunity to earn a living like this.”

Warning others not to be surprised, she stated, “It is an all consuming life, that can earn pennies on the dollar and you must be a person that can take the emotional ups and downs, the stress of finances and have the true grit to still enjoy the life”.

Recognizing that her husband loves competition and fishing, Mrs. Morgenthaler believes he will fish for a long time to come and suggests he do so until it’s no longer fun. Saying even if he gave up tournaments, she is sure he will always be in the Sportfishing industry she remarked, “As long as he has the desire and drive I will be there for him.”

Just as she said, Mrs. Morgenthaler has been there for her husband through his career and has helped him accomplish highlights that include 5-top 10 FLW finishes, 10 top-10 Bassmaster finishes, a Forrest Wood Cup qualification and 3 Bassmaster Classic qualifications.

Again, looking at the concept of inspiration and success going hand in hand, other families, regardless of their goal can be motivated by the Morgenthalers. Their obvious stability, passion and experience can inspire anyone to follow their own passion on a path to success.