Beyond the Pond – Melissa Clunn 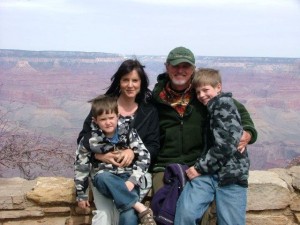 As Advanced Angler takes a behind the scenes look at many of the typically unseen and unheralded women that stand behind the pro anglers in the Bassmaster Elite Series and FLW Tour, we often see the wife that has helped grow and maintain the angling business of their husband. As we meet Melissa Clunn, wife of Bassmaster Classic champ Rick Clunn, we see a relationship that took root with the Clunn’s when Rick was an established touring pro. He had already quite successfully settled into the life as a bass angler, notching out four Bassmaster Classic victories prior to their first encounter.

“We met 17-years ago at Grand Lake in Oklahoma,” said Mrs. Clunn. “I was at the lake supporting a friend that fished. I, myself, love fishing and was prefishing with him for an upcoming tournament he had. We passed Rick who was in his boat working on tackle. He looked up at me and I thought he had the sexiest brown legs and blue eyes that I had ever seen. I am not saying it was love at first sight, but I would liken it to being struck by lightning. He’s not the type to get on one knee and propose; but we had a series of discussions about marriage when we were living in Santa Fe, New Mexico and a female shaman that lived across the valley 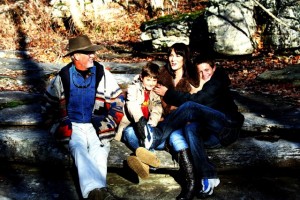 The Clunn Family Having Fun

married us. Rick picked a bouquet for me from the hillside and wore a plain, white cotton shirt. I wore a hippie dress. That’s how it happened.”

Already achieving rock star status as a bass angler, left the typical “unknowns” a non-factor in their union. The risk of the financial security and family concerns of a lack of a nine-to-five, day job did not crop up in their blossoming relationship. “I don’t know if fishing was at all a concern for my family, maybe the fact that he was 22-years older than me was more of a thought,” she stated. “Any reluctance grew into adoration and they were thrilled and excited.”

“Rick had his own schedule and he would’ve had to change it, to retrain me to get into the routine,” said Mrs. Clunn. “When you try to redo what someone is already doing well, you end up getting in the way. We eventually decided we wouldn’t do that and that is what works for us. I keep his sponsors updated and help maintain those relationships; but even with his Facebook and website, he 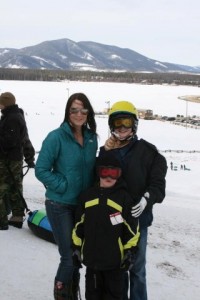 does that interaction with his fans. He keeps all his fan communication on his own. ”

Mrs. Clunn explained that in the beginning she traveled with her husband and continued to do so when their children were younger. “This gave me the opportunity to help him by eliminating the non-fishing things, like meals,” she recalled. “It got more difficult as they children got older because of taking them out of school and sports. We decided it was okay for me to stay home. It also gave me a chance to pursue my passion of gardening. He knows I’m happy in the garden and loves me enough to see me follow that. I am a gardener by trade. When he met me, I was selling organic vegetables out of my truck. You cannot start a garden and leave and have it be a success. Sometimes, I feel guilty when I see other families traveling together and the kids there; but that’s just not me and Rick knows that, so we do it our way.”

Mrs. Clunn’s gardening dreams have grown exponentially and 350 elderberries have been planted on their acreage with plans of a winery on the horizon. “The elderberry is not that good to eat; but it is good medicinally and makes a good jam and wine,” she continued. “We plan for blackberries and raspberries – basically, any fruit wine. Without even knowing it, 12-years ago, we got the perfect spot here in the Ozark mountains. There is a stream behind the house and over 1000 acres, much of it is wooded; but it is close to the water and lends itself perfectly to grow the berries for the wine.”

It is still subject to change, but the proposed name for the Clunn winery is Firefly Nights. It was derived six or seven years ago as Mrs. Clunn explained there was a firefly hatch of millions and the couple watched the spectacular display while sipping wine by the campfire. “A night like that, what else could you ask for,” she commented as she remembered the inspiration for the winery’s title. 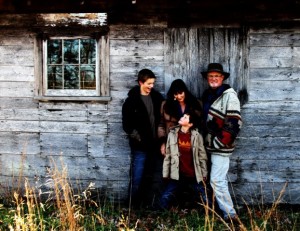 “It’s my passion to be growing anything. It is so satisfying to me to nurture and grow and produce food to feed your family and share with your friends and then to be able to turn it into income is an absolute dream,” she continued. “We’ve come full circle. I was an organic farmer when he met me, we traveled for his dream and now we’re back here growing again. Not many people get to find a mate that has done exactly what they wanted to do in their life – a mate that has taken their gift and made their life’s work of it – someone that is completely happy with their choice, never wishing that they did something else. Rick is such a unique person in that way. What we have is a gift.”

Mrs. Clunn advice for other potential fishing fam’s – “As a woman, be patient. Learn when and where to be quiet. It can be a huge sacrifice; but the reward is worth it in the end. Every couple is different and there are different levels of talent; but at the end of the day treat your husband the same. Whether he wins or loses out there, he is just the person you love when he comes home.”