Bass fisherman are some of the most dedicated and hardworking anglers in fresh water. We are like the post office, out there come rain, wind, and even sometimes snow. We also tend to do a lot of traveling, especially tournament fisherman. These factors combined make our boats especially vulnerable to harm from the elements. Trailering long miles in wind and rain, sitting in motel parking lots under adverse conditions, and even being parked outside for long periods of time quickly take their toll on even the super high quality boats built today.

2012 BASS Elite Series Rookie of the Year Brandon Card has a personal connection to the equipment havoc described in the preceding paragraph. That’s because his rookie year, when he finished 22nd in the AOY race, he actually started the season without a cover for his boat.

“Believe it or not, I was without a boat cover for my Triton going into the year. I picked up a Triton (brand, not the boat) cover from Empire Covers right at the start of the season, and it did a great job of protecting my boat the whole year,” Card says.

In the years since, Card has put many more miles on his truck and boat in pursuit of Elite Series glory, and has become an even firmer believer in the benefits provided by a good cover, saying “My boat is my office. If I don’t keep it in good shape and ready to perform, I’m not going to succeed out on the tour. I’ve been using Empire Covers products since that first year, and I’ve been extremely happy with both their price point and their performance.” 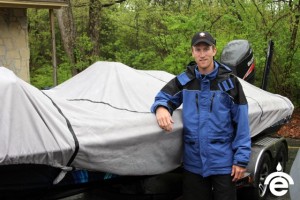 Brandon Card and his Empire Cover

Obviously, a good boat cover’s primary purpose is to protect your boat from sun, wind, rain, and other damage that exposure to the elements causes, especially to boats kept outside. “Let’s be honest here, bass boats aren’t cheap.” Says Card, continuing “I’ve never understood an angler that would spend thirty, forty, or fifty thousand plus on a boat, but wouldn’t buy a quality boat cover. Whether it’s stored outside or not, the benefits of a boat cover on long term durability and resale value are extremely important.”

Obviously, a good cover protects the carpet, seats, and consoles, but Card is especially fond of the fleece lining found on the Empire Covers “Bionic series” cover he uses on his Triton because it protects something many covers do not.

“One thing that happens with a lot of cheaper boat covers, and even some factory covers is that the cover slaps and rubs the gelcoat while trailering, which can actually scuff up the gel coat and leave permanent marks. The Bionic cover is lined with a soft fleece-like material, which completely protects it, even down to the gel.”

Another thing Card says it’s important to look for in a cover is whether it’s vented or not, saying
“Unvented covers can allow odors, fumes, and humidity to build up under the cover, which may cause mold or mildew to form in compartments, on the seats, and in the carpet. Both the Bionic and Aqua Armor covers from Empire are fully vented, and their other covers are made from a breathable polyester material that allows gas and odors to filter out.” 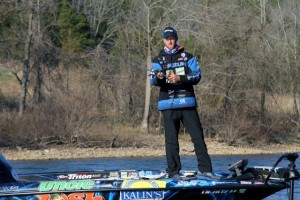 A less obvious benefit of a good boat cover, but one that’s equally important to an Elite Series pro is that covers provide an additional element of security over an uncovered boat. Theft and vandalism is a seldom talked about and unfortunate reality for anglers that travel to fish tournaments. Because he spends so many days on the road each year, Card is especially careful and thinks that a cover goes a long way to stop a thief, saying “I’m at tournament venues all the time and it’s amazing how many times I’ve seen a boat sitting in a motel or cabin parking lot without a cover on it at night. It’s like inviting the whole world to look inside your boat to see what you’ve got.”

Just having a cover and loosely tossing it over the boat isn’t enough to Card either. He recommends anglers tightly secure their cover at night, especially if the boat is going to be parked in an area accessible to the public. “Most boat thefts are crimes of opportunity. A crook will walk through a parking lot and if there is something easy to grab, they’ll take it. A properly installed and tightly secured boat cover makes it a lot more difficult to break into a boat without attracting attention.”

Although many of today’s high end bass boats come with custom covers from the factory, there are still a ton of boats out there without covers, especially older models and the increasingly popular aluminum boats. Card says that for these anglers, covers from Empire really shine. “If you don’t mind a bad pun, Empire ‘covers’ everything. Empire makes what I call a semi-custom cover. They’ve got models that fit most v-hull aluminum boats, fiberglass bass boats, and hundreds of others. It’s not going to be a one-size-fits-all cover that ends up being really baggy, but if you’ve got a boat, they probably have a cover to fit it.”

Card also stresses that Empire has a cover for you no matter what your price point is, saying “These days custom bass boat covers can cost anglers upwards of $1,000. Empire’s top of the line Bionic cover is less than half that price, and they make a model to fit almost any budget under that. It used to be that a lot of the aftermarket covers were tough to fit, low quality, and often not worth your time. That’s not the case anymore. Empire even offers a ‘boat selector’ on their website where you can put your specific boat model in and it will tell you the exact cover to choose for your boat.”

To learn more about Empire Covers, go to www.empirecovers.com