Brandon Palaniuk is one of the fastest rising stars in the professional bass fishing world. Coming from the Western United States and fishing the home lakes and rivers near his Idaho home left him with a glaring weakness that is almost a requirement for a tour professional. 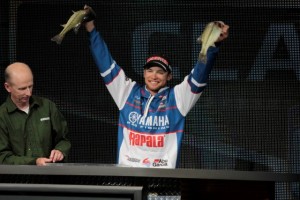 By his own admission, Palaniuk was not very good with a deep diving crankbait.

Sure, the deep plug is easy to throw, and will sometimes catch bass just because it wiggles and makes its own vibration. Those characteristics make it a lure than just about anyone can catch a bass or two on. But, to master it and to be able to duplicate the casts and retrieves needed to truly dominate with the lure is another story.

Palaniuk knew that he had to get more than acquainted with the deep diving plugs in order to be effective at many of the postspawn and summer tournaments that he competes in on the Bassmaster Elite Series. “It really is a lure that we need to be competitive on tour,” he said. “It really is one of the few ways we have of generating any kind of reaction strike through much of the year.”

So, what did he do. Palaniuk set out to make himself better with the baits. he spent hours and hours becoming acquainted with multiple baits and how they dive, what their effective depths are and how to use his electronics and sightlines to line up for the right casts.

He said he would share what he learned as a near beginner with deep cranking that helped him graduate from beginner, to winner on the Bassmaster Elite Series stop at Bull Shoals Reservoir near Mountain Home, Ark. on the third stop of the 2012 Elite Series schedule. he relied solely on deep cranking at a time when the field was predominantly using squarebills and mid depth runners.

Deep Cranking Equipment
First, let’s get the equipment considerations out of the way. Palaniuk said that using a longer than average rod helped him make longer casts and have the leverage to fight bass that had been hooked deep on crankbaits. He uses a 7’6″ medium-heavy Abu Garcia Veritas Winch cranking rod. he pairs that with an Abu Garcia Revo Winch casting reel with a 5.4:1 retrieve speed that he spools with 10-pound-test Berkley Trilene 100% Fluorocarbon line. 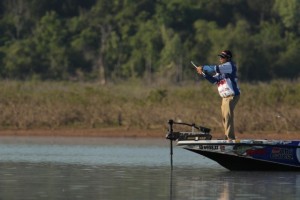 “That equipment helps me make long casts and get the lure as deep as possible,” he said. “Having the right setup really goes a long way towards having confidence in what you are doing.””

Aside from the equipment, Palaniuk had some other tips for anglers to use to get familiar with the technique

Get to Know Your Lures
Palaniuk said that it is important to know how deep your lures run, but also the angle they dive and how far into the retrieve they reach their maximum depths. “I spent hours throwing lures over rocks in varying depths of water,” he said. “That way, I got the feedback of a rock to know that the lure was reaching its depth, and I could make minute changes with the boat to know when each lure reached its maximum depth.”

He said that he became familiar with many lures, then experienced the steep dive angle of the Rapala DT Series, and that made covering water more efficient. “The DT Series gets to its depth quickly and allows most of the cast to be in the strike zone,” he said. “So, instead of retrieving a lure for 80 feet to get to its deepest point, the DT series gets to its deepest point after 20 or 30 feet of a retrieve, and I can fish more of each cast.”

Understand Your Lures
While getting to know your lures is a good thing, Palaniuk said that he has found that sticking with a particular bait long enough to understand exactly how it feels and reacts has helped him get better with the technique. “The more you fish a lure, the more you understand its vibration pattern and that helps you know if there is grass on the lure, or a fish has subtly struck it,” he said. “So, you want to know how deep it will dive, but you also need to know more about how the lure acts, and what it feels like while swimming and hitting the structure.”

Get to Know Your Electronics
Palaniuk said that using his Lowrance HDS Units is critical to finding not only the structure he wants to fish, but also finding the position his boat needs to be in to make the precise cast he needs to make to connect with that structure and trigger strikes.

“I make a waypoint on the structure that I want to hot, and then after making a few casts and finding the angle I want to hit the structure on; I make another waypoint to mark where the boat needs to be positioned,” he said. “But, I still need more. After making those waypoints, I pick a landmark on the shore in front of me, and one on the bank behind me so that I can keep myself on line at a glance.”

Once he has the line, he makes repetitive casts and impacts the structure with his crankbait to try and trigger strikes from bass.
Hit Bottom

Palaniuk said that it is important to make contact with the bottom on most of your casts. “I’d say that 95-percent of the time a bait needs to hit the bottom or the structure in order create strikes,” he said. “So, I pick crankbaits that will dive a little deeper than the bottom I am fishing.” 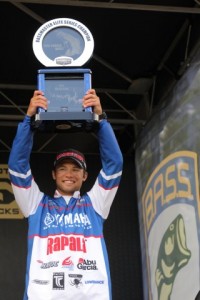 For instance, if he is fishing a bottom in 14 to 15 foot, he throws the DT16, and if the bottom is 18 or 19 feet, he chooses the DT20. “Those lures dive just deeper than those bottom depths, so I feel confident that I will hit the bottom whenever I throw the lure in those depths.”

Final Tip
Palaniuk said he has earned a trick for knowing how to line up his cast when he finds structure he wants to throw to. “If I am idling over an area and I find a piece of structure that I want to throw to, I idle past it before standing up to make a cast,” he said. “The prop of my Yamaha leaves a bubble trail on the surface, so if I cast back to that bubble trail and retrieve my lure through it, I can speed up the process of finding the right line to cast on. That little trick alone can speed up the fish locating process a bunch.

“I will tell you this, I never would have thought that I would be doing an article about deep cranking,” he said. “I guess spending some extra time to get comfortable with them changed some things.”

Bull Shoals is what did it.