Shaky Head fishing is a proven fish catching method. The combination of a finesse head molded on a 3/0 to 4/0 light to medium wire hook, a six to seven-inch straight tailed form and light line on spinning gear has made catching bass in tough conditions easier. Pressured bass will often sulk, and a Shaky Head is a great way to combat the tough times.

However, if you are Bassmaster Elite Series pro Edwin Evers, slowing down enough to fish a Shaky Head is almost pure torture. “I hate having to slow down long enough to fish a standard Shaky Head,” said Evers. “I also don’t like not being able to pick up a thicker, bulkier bait, so I worked with YUM to do something about it.”

The result was the YUM Pumpkin ‘Ed Jig Head, a unique stand up jighead that allows anglers to choose bulkier baits, and fish them differently, depending on the conditions. The Talala, Okla. pro decided that combining features of a several different components would result in a more effective presentation.

The Pumpkin ‘Ed features a heavy wire wide gap style hook, a stand up design and a specially designed screw lock that has a pin on the end to help make sure the angler rigs the worm on the center of the head each time. “I really didn’t want to let this thing out,” he said. “But, I eventually decided that it was so effective, other anglers would do well with it as well.”

Evers revealed that his setup is effective in many instances that he would normally employ a jig or another Texas Rigged plastic. However, because it is in the form of a jighead, it provides him benefits that the other two lures do not. 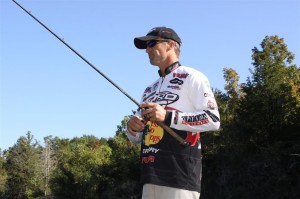 Pumpkin’Ed versus Texas Rig
He loves the Pumpkin ‘Ed with a big worm for fishing ledges or other offshore structure. “A Texas rig is a proven fish catcher, but it has a disadvantage because the worm just lays flat on the bottom when it is rested,” said Evers. “The design of the Pumpkin’Ed makes the worm stand up straight off the bottom, so it is more in the face of the bass.

He prefers to toss the Pumpkin’Ed rig on offshore structure like ledges or the ends of points and work it much the same as he would a Carolina Rigged worm. He does not lift and drop the head like a Texas Rig; instead he sweeps the rod. “I like to lay the rod down to the side and drag the head on structure,” he said. “Keeping it in contact with the bottom is how I seem to get most of my bites.”

Pumpkin’Ed versus Jig
Much like the Texas Rig, a jig is a very effective setup year-round. Evers has found that his Pumpkin’Ed rigged with a creature bait like a YUM Wooly Bug or Mighty Bug gives him a stealthier approach than a jig when bass are pressured. Using the same approach as the worm, he covers the lakebed but gives a slightly less aggressive look to the bass; it gives him a great alternative to the jig on offshore structure. 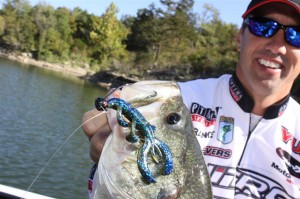 But, that approach is not limited to casting; Evers finds that it is also a suitable replacement for Flipping a jig around cover. In this instance, he uses the same reel, but increases his rod to a 7’6” Pro Qualifier heavy action, and his line size to 20-pound-test XPS Fluorocarbon. He also said that if the cover is heavy enough, he can use it with braided line. “That’s the beauty of the head,” he quipped. “It has a hook in it that will let you do it all, and it will take heavy line, or heavy fish without a problem.”

He likes to gently present the lure into cover with the Wooly Bug or Mighty Bug then shake it in the cover. He said that this approach allows the lure to stay in one position, not moving forward, but standing still, with its tails or claws sticking straight up into the water column. “I can really generate a lot of strikes this way,” he said. “It doesn’t replace a jig, but it certainly gives me a great addition to when they shy off of the jig because of pressure.”

Pumpkin’Ed on Beds
Evers said that he likes the Pumpkin’Ed on a bedded bass for exactly the same reason as the Flipping approach. He said the ability to shake it in place makes it deadly. “I know that we’re still a little ways off from being able to sight fish; even in Florida,” but, this rig with the Mighty Bug is how I won the St. John’s River last year. It’s really a cool bed bait.”

Customized Presentation
He said that all of the head sizes of Pumpkin’Ed setups are available with all of the hook sizes; which Evers said provides a totally flexible rigging. “I can Flip with a 1/4 –ounce head with a 6/0 hook in a big creature bait, or I can throw a shorter creature bait offshore with a 5/8-ounce and a 3/0 hook,” he said. “All of the sizes have all of the hooks sizes, so it really makes it a very versatile presentation. 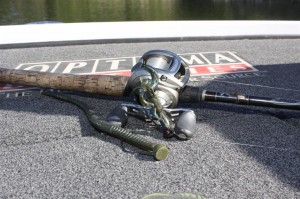 “This gives me the option of using my heavier tackle and bigger baits when things get tough,” he said. “I don’t have to immediately turn to finesse gear, and that gives me a lot of confidence in drawing a bigger bite, and landing it when it happens.”