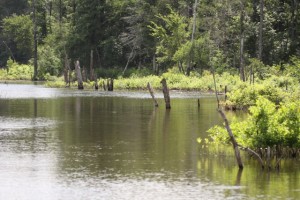 The parking lot at a modern bass fishing tournament can look very similar to a showroom in the Silicon Valley. The amount of technology that today’s angler can employ can be staggering, and a great many anglers have become reliant on the gadgets that the industry has produced for them.

Take for instance the modern fishfinder. Today’s Lowrance units have high speed processors, high definition color screens that reduce glare in the sun, transducers capable of finding Jimmy Hoffa and the ability of the unit to interpret the findings into an image on the screen. Couple that with Insight and Navionics mapping charts that allow the angler to read the lake bed on the GPS side of their screens. 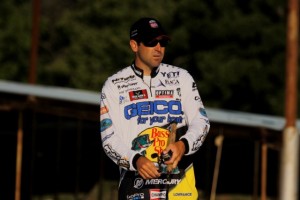 Couple these updates with Power Poles to anchor in shallow water and the Drift Paddle accessory that makes them additionally functional in deep water. The HydroWave baitfish simulator can emit sounds of baitfish into the water and actually cause fish to feed. Lithium batteries can power everything while reducing weight, and now action cameras can be used to record the whole process.

But, have all of these technological advancements replaced good old fishing intuition? The answer is no.

The savvy angler starts his search for bass by focusing on the bass themselves, and void of technology, can still find a way to put fish in the boat when they don’t have all of the luxuries available to them.

Major League Fishing typically takes the best anglers in the world to smaller lakes that many in the field have not been on, and in some cases, lakes that don’t even have charts of the lakebed available. We thought it would be interesting to talk to several of those anglers and find out how they go about fishing without mapping and charts of the topography. We spoke to anglers competing in the new Major League Select events. 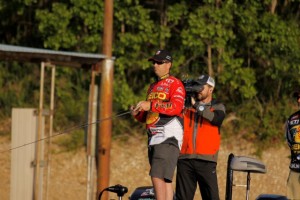 Casey Scanlon
“If that was the case, as it is in some of these MLF events, I always try to find fish by looking at the shoreline and fishing the best looking visible cover,” said Scanlon. “If I don’t have a map of the lake, I scout for areas of the lake that seem to have a little deeper water nearby the cover and try to cover the waterefficiently, but as quickly as possible.” 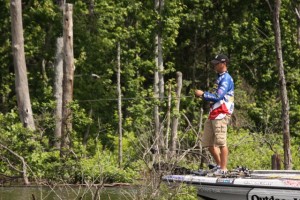 Cliff Pace
“On lakes like this, where there is no information, I tend to go with trying to fish things that have the best visual appeal. Fish tend to get into certain areas and you just have to find where they are by fishing and let the fish reveal themselves,” he said. “I might spend a little bit of time graphing the areas with my fishfinders to see if I can get a read on the bottom. But other than that, I look at a lake and try to relate it to places I’ve fished before; which is probably the best thing I can do to build comfort levels quickly.”

Todd Faircloth
“It starts for me the moment I pull into the parking lot,” he said. “I look at the water level and try to figure out if the lake is high, rising, or falling. If the lake is high, there will be debris floating and if it is falling, there will be a wet ring around the lake, then it is falling. After that, I like to look more a creek that fish would tend to live in, not the main lake where they roam around a lot.” 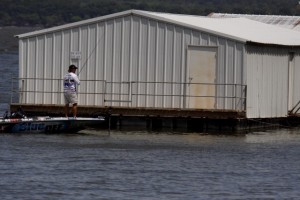 Keith Poche
“I walk to the edge of the water and try to see the clarity or level of the stain of the lake,” said Poche. That little thing can help me select bait colors, which is important to triggering bites. I also look at the shoreline to try to understand if the lake has a lot of grass, or is a rocky bottomed lake. Then I just go fish the lake as i would a pond, finding obvious things and getting bites.” 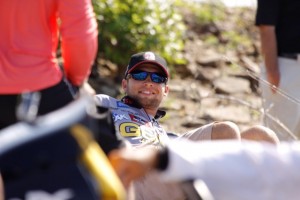 Brandon Palaniuk
“I really like to see the type of cover in a lake. Is it grassy, have lily pads, or is it a lake with a lot of wood,” he said. “That knowledge helps me pick out the type of approach that I need to make on the lake. After that, I look for an area with a little more depth and areas that have harder bottoms; the kind that fish live in.”

Marty Robinson
“I look at the terrain as I drive into the lake, that really helps me begin to understand what the floor of the lake was like before they flooded it,” he said. “Doing this helps me visualize the kind of stuff that will be under the water so that I can pick the right lures and look for the best areas.” 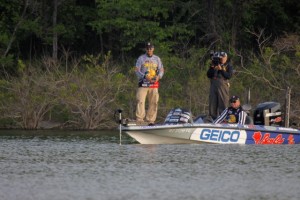 Ott Defoe
I love my electronics, and even if I don’t have mapping, I will try to cruise the lake at a slower speed and try to find some structural features that will show me an offshore place that fish will relate to,” he said. “This helps me figure out where to start my search for bites. Other than that, I tend to go fish what I can see.” 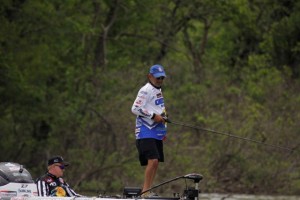 Paul Elias
My first thing is to pick an area and try to get some bites on something obvious on the bank,” said Elias. “After that, I will try to figure out if there is a concentration of fish in the area, then burn a little bit of time with my electronics trying to see if I can find something to throw a crankbait on offshore.”

These are tricks that the pros use, perhaps you can incorporate them into your outings and catch more bass yourself