Hot Start to 2012 for Brent Chapman

Brent Chapman has long been one of the more consistent anglers on the Bassmaster Elite Series. The Lake Quivira, Kan. pro has been building to a crescendo for the past few seasons. His peak may be occurring in 2012. 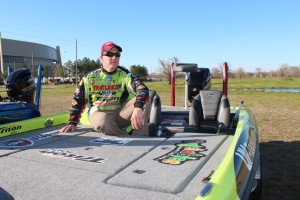 But, it didn’t just arrive suddenly. Chapman has been showing how consistent he could be with back to back top five finishes in the 2010 and 2011 Bassmaster Classics. Then, after getting in to the 2012 Classic at the last day of the 2011 Bassmaster Elite Series season; he became the second angler to qualify for the 2013 Classic at Grand Lake in Oklahoma when he won the first Bassmaster Central open on Lake Lewisville prior to the 2012 Classic in Shreveport, La.
He hasn’t stopped since.

Despite a stumble at Douglas Lake that saw him missing his first tournament cut since last season, Chapman is currently sitting in third place in the Toyota Tundra Bassmaster Angler of the Year points standings. He led the race for one event after The Bull Shoals event, and said that a lot of his early comfort has come been building, but feels like things are coming together.

2011 Classic
Chapman said he started to feel like things really started coming into focus for him with the decisions he started making in the New Orleans Classic. “I fished as good as I could in the Louisiana Delta,” he said. “I really was keyed in to what the fish were doing and as practice and tournament wore on, I just really felt like I knew what those fish were doing.” 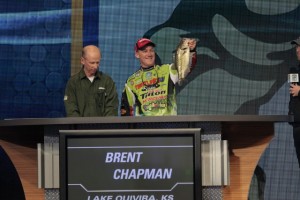 “I started out Flipping a bunch of different plastics, but when I got onto the 3-inch Tightlines UV Beaver, they went nuts,” he said. “There was something to how that bait appeared in the water with the UV that made them start smashing it, even in the cold water. I was basically able to call my shots and I was fishing really clean.”

So, armed with his Wright & McGill Co. Skeet Reese Microhoneycomb Heavy Cover rod and a Victory 701 reel, his UVBeaver and a 3/4-ounce eagle Claw Lazer Tungsten sinker on a 5/0 Lazer TroKar TK130 hook, he started to feel like things were shaping up.

Lewisville Confidence
Despite his confidence from the Classic, the 2011 season did not go as well as he had hoped. But, when he was able to make the Classic in 37th place in the standings, he prepared for the Red River and got ready to fish the 2012 Bassmaster Central Opens.

Two weeks before the Classic, at one of the toughest events in recent memory, Chapman won with 20 pounds, 9 ounces after a tie breaking fish off. The win earned him his third B.A.S.S. victory, but more importantly, it earned him a trip to the 2013 Bassmaster Classic in Oklahoma.

“There is no doubt that winning at Lewisville, and qualifying for the Classic already has given me a lot of freedom in the Elite series,” he said. “It has allowed me to make some decisions to do things that I might normally think of doing, but then not do because I needed to fish for the points.”

Freedom to Take Chances
The ability to fish without concern for what might be lost can certainly be like holding the only key to the triggers in a nuclear arms race, and Chapman has been fishing like he has that control over his destiny. “I have been able to take a few risks that I normally wouldn’t have taken, and it has paid off,” he said. “It has been really nice to get out of my comfort zone and fish for big finishes; it’s been great.”

He said that he would love to have a chance to re-do his practice at Douglas Lake; a tournament that cost him his AOY lead, but even though he’s not in the lead currently, he knows it isn’t over. “It’s a long season, and we’ve got a lot of fishing to do,” he said. “I’ll keep doing my homework and make my decisions and hopefully we can make it interesting. 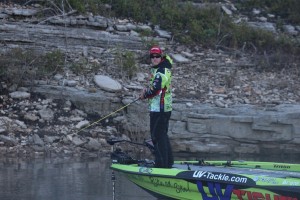 “I know this, I’m learning things that will help me go into competition in the future,” he said. “I’ve needed to learn where I can take some calculate risks, and this year is helping me do that.”