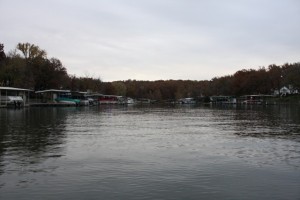 Kevin VanDam is a power fisherman.  Crankbaits, spinnerbaits, jerkbaits etc.; the man is on the move at all times.  His all out attack has become famous, and his style has earned him a list of credentials a mile long.

Even VanDam needs to slow down once in a while.

The type of conditions that force the Kalamazoo, Mich. angler to slow down are the combination of clear water and suspended, inactive bass.

I can catch suspended bass on a jerkbait a lot of the time,” said VanDam.  “But, sometimes, when the water is really clear and the wind is too light, then they will get really inactive.  Those conditions can force me to turn to a technique that I’ve used for years at home in Michigan.”

VanDam likes to swim a grub in these conditions.

VanDam turns to spinning gear for this application.  Yes, we said that, please gather your jaw from the floor.  The reason is because he is tossing the lure on a light jighead, and he is using light line.  “I like to go as light as possible, but my mainstays are 3/16 to 1/4-ounce Strike King Shaky Heads,” said VanDam.  “I pair them with a Rage Tail Grub and proceed to slowly swim the grub through the water column.” 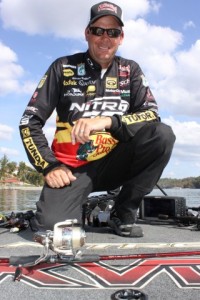 KVD Shows off his Grubbin’ Gear – photo by Dan O’Sullivan

He generally selects 6 to 8-pound-test Bass Pro Shops XPS Fluorocarbon; depending on the water clarity, and he matches that with his 7′ medium action signature Tour KVD rod and size 40 Tour KVD or EXO spinning Reel by Quantum.  He said his rod has just the right taper and action for this technique, and he has a special reason for the larger sized reels.

“Most anglers talk about the weight of reels, and they sacrifice the most important part of the reel’s function when they downsize in favor of lightness,” he said.  “Being able to set the hook, and handle fish effectively is all about how many inches per turn of the handle you can bring in.  The more the better, and the larger spool sizes are better.”

He chooses his grub colors with much the same consideration as he does his crankbaits; by examining the sky and water conditions.  “In high skies with clear water I’ll use a Blue Glimmer Flake, Smoke Blue or Bluegill,” he said.  “In stained water, or in darker skies I’ll go with a Watermelon or Green Pumpkin.”

He said that any place bass suspend can be effective place to use this technique, however, he prefers to use it in places where bass have something with which to ambush from.  “I like this around floating docks over deeper water, on bluff walls or even suspended timber,” he revealed.  “Those areas give bass something to frame the lure against, or something to pin baitfish against, they are natural ambush type areas, and bass can use them to strike from, or against.”

He also said that he will swim them for bass that are suspended over main lake points, or when smallmouth bass are on flats on the lakes around his home in Michigan as well.

How to Grub
The four-time Bassmaster Classic champion said that the actual presentation is a very easy thing to pull off.  “It is truly a cast and retrieve type of deal,” he said.  “The only real trick is figuring out the depth at which bass are holding and making sure that your lure is in the strike zone.”

For most bass, that means you will need to swim the lure slightly above their heads.  For one thing, because bass’ eyes are positioned on top of their heads, they are more effective feeders 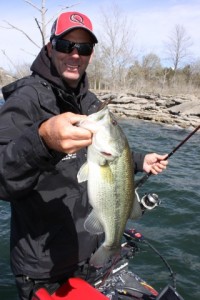 KVD Shows off some Grubbin’ Results – photo by Dan O’Sullivan

when they are looking up at the bait. But, that is not the only reason.  VanDam said that there is another factor and that is the surface of the water.

“If you’ve ever looked up at the surface of the water while swimming, it has kind of an mirrored effect to it,” he said.  “That helps to kind of camouflage the lure a little and makes bass have to get a better look, so they move up to ambush.  The surface of the water is a great tool to use when fishing for suspended bass.”

After figuring out the depth of the bass, making a cast past the school, and counting the lure down to the level you want to retrieve, VanDam said it is best simply slowly retrieve the lure and let the curly tail of the grub do the work.

Wrapping Up
VanDam said that his grub technique is one that he has used in tough conditions across the country.  “I’d rather be moving fast and throwing one of my power presentations,” he said.  “But, this is a simple way to  keep moving, while presenting a finesse type lure to bass when things are tough.

“It’s an excellent option for me when I need to scale down.