Like most anglers, Elite Series pro Kurt Dove had seen a jerkbait, and on a few occasions, the angler – formerly from Virginia – actually used them on one of the clear lakes in his region, which were few and far between. So, like so many anglers in his region, he loved to flip, pitch throw shallow crankbaits, spinnerbaits and topwater. 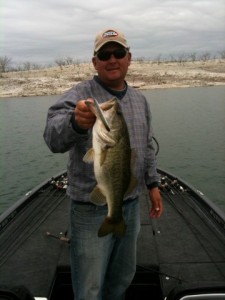 Then he moved to Southwest Texas’ bass factory Lake Amistad, and the water was clear. So clear that he could see deeper than he had fished in some of his lakes back home. After stepping down from the Elite Series to start a successful guide business at the lake, he realized that some of his tactics needed to be refined.

By accident, he discovered jerkbait fishing.

He said that he was busily helping his sponsor at ima Lures with some video projects on a slick calm day. He decided that it would be a good time to show the action of the Flit 120, designed by his ima Lures counterpart Michael Murphy. In one six minute video, he caught four bass.
He was sold on jerkbaits.

Surprise, Surprise!
Dove; who is making his return to the Elite Series stage in 2013, said that he was surprised to see bass react to a jerkbait on a very “un-jerkbait” type of day. “I’d heard all of the normal conventions of reaction bait fishing,” he said. “Got to have wind, clouds and wind, but I was pummeling these fish in clear water, and it was dead calm. I had to examine it.”

He came to the conclusion that jerkbaits are very different than any other category of reaction lure. He found that jerkbaits are the only lure in the reaction bait category that an angler can fish slowly and quickly at the same time. “I know that sounds weird, but I can make the lure do a lot of quick movements but leave the lure in the strike zone for extended periods of time,” he said. “A spinnerbait sinks when you stop and a crankbait floats back to the surface; a jerkbait just stays there.”

His conclusion was that a jerkbait would make inactive bass strike because of its unique dual talents. Dove said that he has invested himself into learning more about the technique and he offers up some advice for anglers giving the technique a try.

Choose Equipment by Water and Cover
Dove said that he selects his rods and line by the water conditions and the cover he is fishing. “I match my rods and my line to the cover,” he said. “In little to no cover, I use lighter action and diameter and go up from there.”

He prefers to use a 7.1:1 retrieve speed reel because he is working with slack line so much. 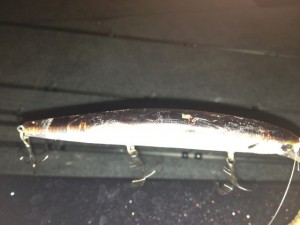 “There is an awful lot of slack involved with allowing a jerkbait to pause,” he said. “Bass will also strike the lure and push it at you, and you need the speed to catch up to them.”

Fish Shallow and Easy to Start With
For starters, Dove recommends anglers fish around cover, and to fish shallow. The reason, he said, is to build confidence in the lure’s actions and its fish catching ability.

“You want to be able to see all of the different movements the bait makes, and now how it responds on a short twitch, a sharp snap and a long pull,” he said. “You also want to start seeing results in producing fish catches. By getting familiar with the action and catching bass, you will learn what the lure does before moving to more complex offshore humps and flats.”

Vary the Retrieve
Dove said that he recommends his clients to not get too wrapped up in any one type of retrieve. “Everything is a variation of a twitch, twitch, pause,” he said. “But, if you go 15 minutes without getting a bite, change it up. Go with a sharp slashing retrieve, or a long pull and pause until you find something the bass will respond to, then duplicate it on the next cast. 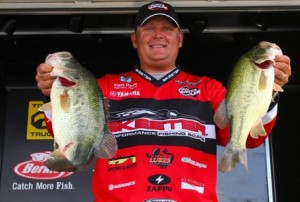 He also said that the water temperature will dictate the retrieve and pause. “In cooler water, shorter twitches and longer pauses will usually be the best,” he said. “As water warms prior to the spawn, a faster cadence with fewer and shorter pauses will be more the norm.”

Other than that, Dove said that he suggests anglers try something new, and that now is the best time to give a jerkbait a try. “The ima Flit 120 is a great jerkbait, that is engineered to run deeper than other baits in its category, and experimenting with it, or other jerkbaits can really produce this time of the year,” he said. “Now is the best time of the year to start, it is prime jerkbait time, and a great time to learn about tossing them.”