Locate Fish by Seeing the Details – with Fred Roumbanis 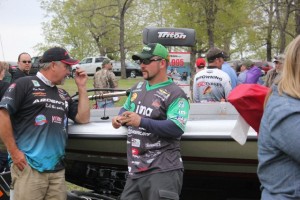 At the highest levels of the sport of bass fishing, there are only a couple of things that set the anglers apart.  The truth is, for the most part, the anglers are pretty evenly matched in terms of mechanics.  They can all cast well, all pitch well, and they all have the best equipment.

For sure, they all have their individual strengths and weaknesses that contribute.  However, with some exceptions, if you take a guy known for power fishing, and put him into a finesse event on this level, he has enough skills to be competitive. With that much in common, what makes one angler excel over another on any given body of water?

What separates them?  Their ability to find the right fish and make decisions is what truly sets them apart.  Execution when presented an opportunity is a close third, but an angler who cannot locate bass, and then adjust to the conditions as the event wears on will not survive long on tour.

We spent some time with Bixby, Okla. pro Fred Roumbanis to find out what type of things he looks for when locating bass and coming up with a pattern for a tournament.  Roumbanis’ record speaks for itself.  As one of a handful of anglers who is competing on both the Bassmaster Elite Series and FLW Tour this season, he is one of only three that have a chance to qualify for the championship in both circuits.  His approach to finding fish has helped him thrive.

“The biggest thing for me is to be able to get as much information from one fish as I can,” he said.  “I will repeat something that I heard David Dudley say a while ago.  He said that you should be able to write a one page essay on all of the information you take in on each fish, and he was right.”

So, what information does Roumbanis look for? 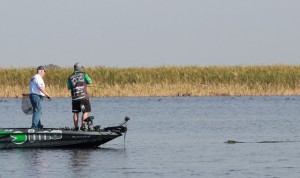 Something from Each Fish
Roumbanis looks to gather as much detail from each fish that he catches during practice to enable him to start refining his pattern.  But, in order to gain as much data, he has to quickly examine each fish for clues.  “It’s kind of like doing an investigation of sorts,” said Roumbanis.  “You have to look at everything the fish is telling you to help you identify where it is living, what it is eating and what the fish’s mood is.  All of that information can help you start putting together a pattern.”

Some of you are probably thinking to yourself that there is no way anyone could get that much information from one fish.  Roumbanis said that he can begin to pull it all together with just one bite.  “The shape of the fish, the color of it and the condition of it can all provide huge clues,” he said.  “You just have to know what you are looking for, and at.”

Another thing he looks for, especially this time of the year, is how fish are built.  “If I catch a big female, and her tail is red and she is still skinny, then she has just gotten off the bed,” he said.  “The chances are that the females are lethargic, and that I might have to slow down.”

If he catches a fish that has mud, or silt on the belly, then fish are living on the bottom and they are positioned on a soft bottom.  If he is fishing a lake with a lot of open water, and fish are light colored, then they are predominantly living in deep water, if they are brilliantly marked, then they are shallow. 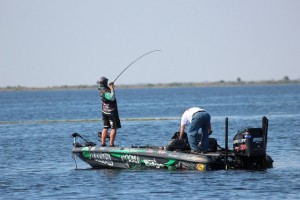 For Florida, and other grass filled lakes, bass can often be almost black in color.  Roumbanis reported that those black fish are those that spend their whole lives in the grass, and is probably a solitary character.  On the other hand, a bass that comes from the grass, but is lighter colored, just arrived in that grass bed recently, so that could signify that schools of fish are moving into the grass.

“All of that data can help you figure out what they are doing, and help you choose the kinds of techniques, or approaches you need to use,” he said.

Not Only on the Water
Roumbanis said that getting that data can continue in the weigh-in line as well.  He said recently, he found himself in a PAA event on Douglas Lake, and he was at the wrong end of the standings after day one.  “I didn’t get much practice because of battling a migraine, so I went with my strengths starting the tournament,” he said.  “I went upriver to the dirty water and threw cranks and topwater.  It didn’t work well, I came in with seven pounds.”

He said he compared his fish to the one’s in his competitors’ bags and realized he needed to make a change.  “The other guys had a lot more weight than me, and their fish were bright, and clean without any marks,” he said.  “Mine were dark and beat up, so I knew that the better fish were out on the main lake.”

He went there on day two, used his electronics to find the depth and weighed 22 pounds on an Umbrella Rig and moved up to 22nd place for the event; ahead of 77 other anglers in the field.  “Had I not been paying attention in the weigh-in line, I would have repeated the same mistakes on day two,” he said.” 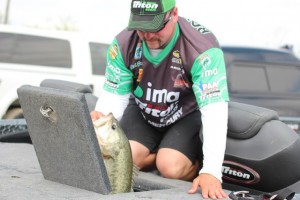 Duplicate and Imagine
Roumbanis said that anglers need to look for ways to duplicate patterns once they start putting things together.  “If I start catching them on flats in pockets with creek channels next to them on the western shore, then I’ll stop and see if I can find more,” he said.  “I zoom out the Navionics mapping on my Lowrance HDS units and try to find more areas like that on the same side of the lake.  If there is something specific, like laydowns, docks or rocks that are a part of that, then I can look on Google Earth to see if it has the same components to it; that saves me a lot of time, and helps me find more productive water.”

Finally, Roumbanis provides this advice to anglers looking to locate fish for tournaments.  “Save something for your imagination during practice,” he said.  “If you find several spots that have what you’re looking for, don’t fish them all in practice because you could be giving away secrets, or burning up fish, even if you don’t hook them.  Just getting bites and shaking fish off can alter the way they respond.

“But, if you’re fun fishing, find them, catch them, and have a good time,” he said.  “This info helps me find and catch more, I just have to pay attention to the details.”